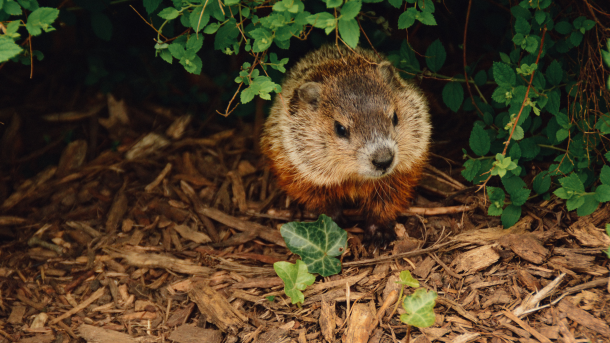 Photo by Abigail Lynn on Unsplash.

Groundhog (Marmota monax): one of 14 species of marmots, a group of large ground squirrels

In the United States and Canada, Groundhog Day is a popular tradition celebrated every year on February 2. The holiday stems from a Pennsylvania Dutch superstition. It is believed that if a groundhog emerging from its burrow on this day sees its shadow, it will retreat to its den and winter will persist for six more weeks. If it does not see its shadow, spring will arrive early.

The most attended Groundhog Day ceremony is held at Punxsutawney in western Pennsylvania, centering around a semi-mythical groundhog named Punxsutawney Phil.

Groundhog Day first appeared in the local Punxsutawney newspaper in 1886, according to The Punxsutawney Groundhog Club website. The celebration has grown in size and popularity since its first celebration.

Size and Weight: A groundhog can weigh up to about 13 pounds and has a body length of up to 20 inches. It has a bushy tail up to 7 inches long.

Fur: Groundhogs have thick fur that ranges in various shades of brown. Their feet are darker, and their underparts are buff. Melanistic and albino individuals sometimes occur in some populations.

Diet: Groundhogs are vegetarian. They eat grasses, other green plants, some fruits, and the bark and buds of trees. They feed heavily in summer and early fall, accumulating huge fat reserves for their winter hibernation.

According to the National Wildlife Federation (NWF), a groundhog may pack in more than a pound of vegetation at one sitting during the warm season. This is similar to a 150-pound man scarfing down a 15-pound steak.

Although groundhogs dig deep and extensive burrow systems, they are also good swimmers and can climb tall shrubs and trees.

Geography: Groundhogs are found from the eastern and central United States northward across Canada and into Alaska.

Breeding: Groundhogs tend to be solitary except in the spring when a litter of four to six young are born. Litters of one to nine have been recorded. The young stay with the mother for two to three months.

Hibernation: The animal is one of a few true hibernators. It curls into what appears to be a lifeless ball. Its body temperature can drop from about 99 degrees Fahrenheit to as low as 37 F, according to NWF. Its heart rate slows from about 80 beats per minute to 5 and its breathing slows from around 16 breaths per minute to as few as 2.

During this time, about 150 days without eating, a woodchuck will lose no more than a fourth of its body weight, according to NWF. This is possible due to all the energy saved by the lower metabolism.

Conservation Status: The groundhog is classified as a species of least concern on the International Union for Conservation of Nature (IUCN) Red List of Threatened Species. In some areas, groundhogs are so numerous that they are regarded as pests. Their digging activities damage gardens and other surface vegetation.

Threats: Groundhogs are preyed upon by several animals, such as wolves, coyotes, dogs, foxes, bobcats, lynxes and black bears. Birds of prey and snakes also prey on groundhogs.