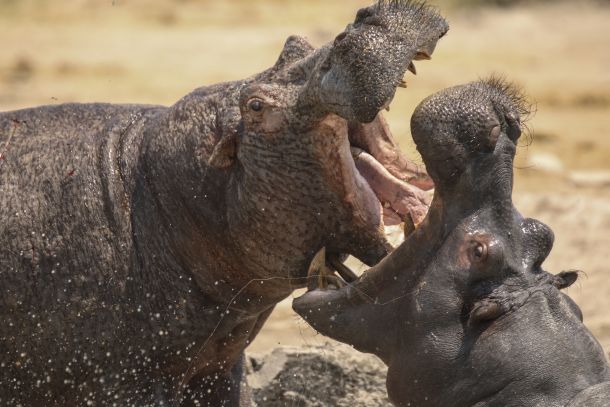 Two hippos aggressively fight, one defending his territory while the other seeks to challenge for the water pool. (Credit: © The Natural History Film Unit Botswana)

Hippos are notorious for their aggressive behavior, killing about 500 people every year across Africa. Few filmmakers have attempted to capture their lives in detail, but director Brad Bestelink was determined to take up the challenge.

“I was born to the delta, brought into the swamp when I was four days old,” Bestelink explained in the special behind-the-scenes clip of Hippos: Africa’s River Giants. “I’ve always wanted to make a film about hippos in the Okavango, simply because they are pivotal to the way the whole Okavango itself functions.”

The short inside look takes viewers behind-the-camera to see the making of the film and the challenges the crew experienced. Filming hippos can be a risky task, so Bestelink and cameraman Mike Amos were forced to be creative with their filming techniques.

“It’s very difficult. You need to get really close to animals underwater to be able to get the footage and understand what they’re doing, but you don’t wanna get too close to them because they’re dangerous,” Amos said in the film.

Bestelink recounts a time when he accidentally surprised a hippo.

“He obviously got a hell of a fright when he saw us. He hit the side of the boat, threw us off. We caught him in the shallow. He felt vulnerable, lashed out. All the gear on the boat just went to the bottom,” Bestelink described in the film. “I’ve just spent the last hour diving all this stuff out. Quite a frightening experience.”

Soaked and damaged equipment was captured by photos in the film.

The team sought to avoid a similar situation when filming by getting creative with their filming strategy. One technique that Bestelink tried was planting a pole camera directly in a hippo’s path.

Through the use of various techniques, the team was able to successfully capture the intimate lives of hippos.

produced and directed by