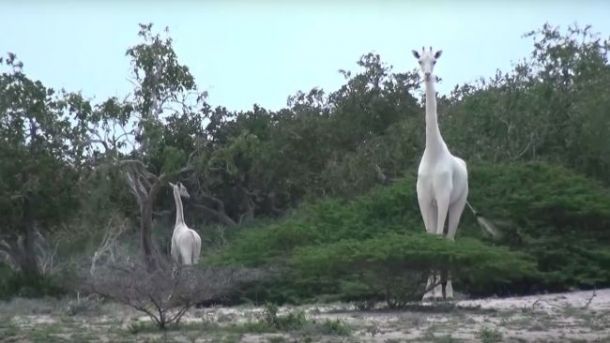 Earlier this week, two extremely rare and mesmerizingly white giraffes, a mother and calf, were killed by poachers in Kenya, leaving only one white giraffe, a male (or bull). The white giraffes showed signs of a disorder known as leucism, which is a partial loss of pigmentation, unlike albinism which is a total absence of melanin. What we’ve lost is significant: the lineage of this special giraffe family, the genetic information that could’ve been gained, and the beauty and inspiration they provided to onlookers.  It’s a hit to Kenya’s conservation efforts, revenue from tourism, and so much more.

These giraffes represent an anomaly of the species, but what does this mean for giraffes in the wild and in areas of conservation in general? Are poachers the highest risk to giraffes? Or like many other species, are global warming and changing environments impacting these majestic creatures more? Does it matter?

Estimates by the Giraffe Conservation Foundation and African Wildlife Foundation put the number of giraffes currently in Africa just over 110,000, a 40% decrease 30 years. In Kenya, the estimate is under 16,000, a decrease of more than 50 perfect in the last 30 years, as reported by the New York Times.

Despite efforts like educating local communities and reforesting key areas, threats to giraffes continue to rise. The IUCN lists four major threats, all of which lead back to humans: habitat loss, civil unrest, illegal hunting, and ecological changes (climate change and habitat conversion). Poaching and wildlife trafficking for giraffe hide and meat is devastating the population, and as human populations grow, precious resources for giraffes, like land to roam and acacia trees to eat, decline.

So what can you do to support conservation and protection efforts for giraffes in Kenya and worldwide? You can learn what organizations dedicated to helping giraffes are doing, like the Giraffe Conservation Foundation, African Wildlife Foundation , and the Kenya Wildlife Service, who is working tirelessly to track and learn more about giraffes and their plummeting population. Another way to help is educate yourself on how to identify and report wildlife trafficking online, via the Coalition to End Wildlife Trafficking Online.