Rat species are found throughout the order Rodentia. Stereotypical rats are found in the genus Rattus, which includes some of the better-known species of rat, such as the brown rat (Rattus norvegicus) and the black rat (Rattus rattus). The term rat applies to any of 56 thin-tailed, medium-sized rodent species in the genus Rattus that are native to continental Asia, the islands of Southeast Asia eastward and the Australia-New Guinea region.

The term rat may be used to describe other smaller mammals that are not rats, such as North American pack rats and a number of species called kangaroo rats. 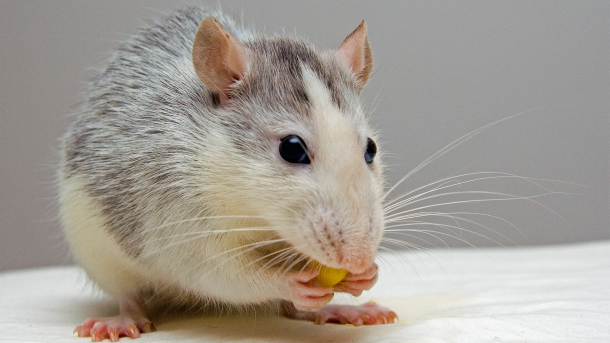 Rats vary in size depending on species. Their bodies are typically longer than 5 inches, and they rarely weigh more than 18 ounces. Smaller, thin-tailed rodents are referred to as mice.

A rat’s appearance varies depending on species, but overall, rats are medium-sized rodents with long tails. Their tail is one of their most distinctive characteristics, and it ranges in length from slightly shorter than the body to considerably longer than the body. While their tails often appear hairless and smooth, they are actually covered with very short, fine hairs.

Rats are generally slender with a pointed head, large eyes, and prominent ears. They have moderately long legs with long, sharp claws. The bald soles of their narrow hind feet possess fleshy pads of variable size, depending on species. Rats come in a variety of colors, including black, white, gray, brown and red. They can also be spotted or multi-colored, but those are most often rats bred as pets.

A common misconception about rats is that they eat everything. However, the diet of a rat depends on the species. This misconception may have developed as a result of the highly adaptable brown rat and house rat. House rats eat nearly anything digestible, especially stored grains, when living humans. Meanwhile, the brown rat is omnivorous but prefers a carnivorous diet. Brown rats hunt a wide range of prey, including shrimp, snails, mussels, insects, and bird eggs.

A rat’s habitat strongly influences its diet. For example, rat species found in rainforests, such as the Sulawesian white-tailed rat and Hoffman’s rat, eat only fruit and the seeds within. Other rainforest species, such as the Philippine forest rat (R. everetti), also eat insects and worms. Meanwhile, other tropical species, such as the rice-field rat (R. argentiventer), primarily consume the insects, snails, slugs, and other invertebrates found in their habitats.

They are often found around human populations, as they tend to infest any area that provides food, water, and shelter. The common species are opportunistic survivors and are known as commensals.

Rats can be found on every continent except Antarctica. They are in nearly every area inhabited by human beings. Antarctica is the only rat-free continent because it is too cold for rats to survive outdoors and it lacks human habitation that provides shelter and food.

Rats are efficient multipliers. The brown rat’s reproduction is the most studied of all species. It reaches sexual maturity at three months and may produce up to 12 litters of 2 to 22 young per year. On average, litter size is 8 or 9. Reproduction peaks in spring and autumn. The gestation period is 21 to 26 days.

Rat are very social creatures and live in groups. They are healthier and prefer living in groups. If you separate rats, their stress levels go up. Rats commonly groom each other and sleep together. They form family groups of a mother and her young. Rats are territorial and act aggressively toward unfamiliar rats.

The lifespan of a rat depends on the species. The average rat will live for about one year in the wild due to predation. Female rats often outlive the males. Some domestic rats can live closer to two years.

In most countries, rats are often considered pests. In developing countries, rats may cause substantial food losses. Rats are also a threat to humans because they are known to carry diseases, which they spread directly through bites or indirectly. Wild rodents can carry diseases and different zoonotic pathogens, such as Leptospira, Toxoplasma gondii, and Campylobacter. Rats also threaten human infrastructure, as they are known to chew on wires and build nests throughout human living spaces.

Rats can also be invasive species. When introduced into locations where rats previously did not exist, they can wreak an enormous degree of environmental degradation. Through predation and competition, rat species have caused the extinction of many species on tropical islands. The black rat is considered to be one of the world’s worst invasive species.

Due to these characteristics, rats are often controlled and removed from areas where they can pose the greatest health risks to people, pets and other wildlife.