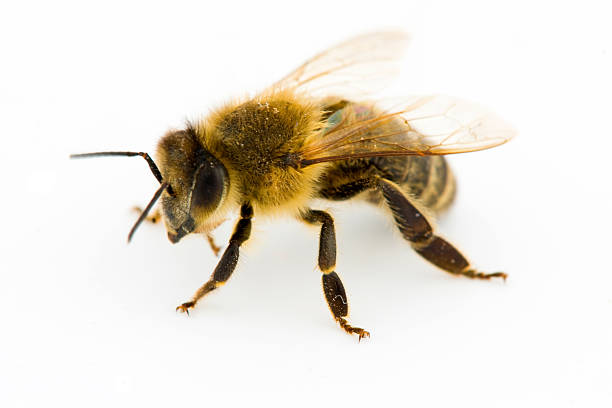 With nearly endless exposure to pesticides, parasites, and more, the European honey bee (Apis mellifera) has certainly had its share of troubles. Still, even when life—and particularly “romance”—goes according to plan for honey bees, it isn’t all sweetness and light.

Each honey bee colony is comprised of many thousands of female workers, scores of male drones, and a single queen bee. Once mated, the queen’s only job will be to lay eggs. This work is so important that a handful of workers attend to her every need. They feed and groom her, remove her waste, and so on. This enables her to keep laying eggs. And laying eggs. And laying some more. Queens do get to kick up their heels a few times before they’re saddled with such responsibility. After all, it wouldn’t do to lay unfertilized eggs.

Virgin queens on the prowl make “maiden flights” high overhead to attract the attention of nearby drones. Compared to worker bees, drones are much larger. (They exist solely to mate with the queen, in fact.) Drones’ comically large eyes and über-powerful wing muscles help them to spot and catch up with their love interest. The queen soars high into the sky, pursued by a cloud of eager males. Only the fastest, strongest fliers are awarded the dubious honor of insemination.

Mating takes place mid-flight, and, if you could be a bystander up there in the clouds, you would actually hear a popping noise with each coupling. That’s the sound of the drone’s genitals snapping off inside the queen’s reproductive tract. The queen will mate with several more drones, and, after each has “succeeded” with her, he falls to earth, sans penis—and likely wondering if, perhaps, he shouldn’t have swiped left.

Although this drama typically unfolds far overhead, beekeepers like S. A. Shuck were able to satisfy their curiosity as early as 1882. Detailing his bizarre experiment via American Bee Journal, Shuck took a five-day-old, virgin queen and “[looped] a silk thread around her waist.” He attached the 10-foot-long thread to an 18-foot-long pole which he carried to his apiary. “In less than a minute several drones were pursuing her and the number increased rapidly,” he writes.

Upon the now-mated queen’s return to the hive, the fun is over. Her attendants will remove any leftover drone bits, clean her up, and put her to work. So, the next time you have a bad date—or no dates at all—count your lucky stars you’re not a queen bee. Or, worse, a drone—dying in green grass, dreaming of lost love.