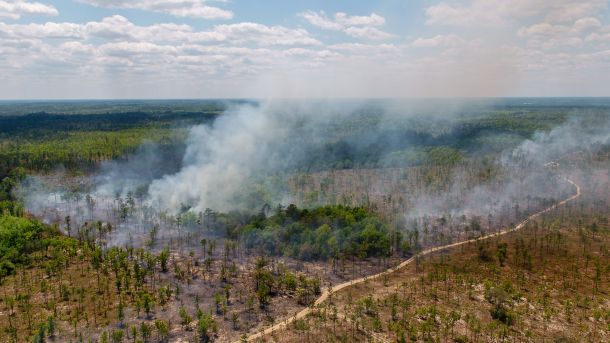 Florida’s unique location, surrounded by warm water, provides everything needed for thunderstorms to form, according to the National Weather Service (NWS). This makes Florida the lightning capital of the United States. More people die from lightning strikes in Florida every year than in any other state.

More than one million lightning bolts strike the state each year. Just one bolt can ignite the state’s longleaf pine forest. And while it might seem contradictory, these fires help clear the forest floor of unwanted scrub and allow new pines to germinate and grow without competition. But lightning-strike wildfires threaten the growing human population, so they must be put out immediately.

So how does Florida balance this? By creating controlled prescribed fires. To keep longleaf forests alive while keeping people safe, burns are now man-made and carefully managed by organizations like The Nature Conservancy (TNC).

NATURE connected with David Printiss, TNC North Florida Program Manager, about some questions that we had about prescribed fire.

“Wild Florida” premieres on NATURE on Wednesday, Feb. 12, on PBS.

The Apalachicola River region is one of five biodiversity hotspots in North America. What this means is not only are there a large number of species here but also that many of these plants and animals occur nowhere else on the planet. For example, there are areas within the longleaf forest where you can find up to 50 different species of plants in one square meter! The Nature Conservancy’s Apalachicola Bluffs and Ravines Preserve protects and supports biodiversity and longleaf forest in this spectacular region.

Why is important to protect and restore longleaf pine forests?

Frequently burned, well-managed forests not only provide homes to a wealth of plant and animal species but are also the chief source of clean drinking water for our cities. These same forests also provide important natural resources such as wood for home construction and paper production. Many communities in the Apalachicola Region depend on healthy forests for jobs and as a tourist destination attraction.

Why does The Nature Conservancy focus efforts on longleaf pine forest restoration among the landscapes they protect or manage?

In the longleaf forest, the diversity is from the knees down. The blanket of groundcover plants is in itself quite diverse, but it also provides a home to an abundance of wildlife species. Together, along with the needles that fall from the longleaf pine, this rich blanket of plants also provides the light fuels needed to carry the low-intensity fires that keep the forest healthy. Unfortunately, in many areas, the groundcover layer has been lost, leading to a significant reduction in both species diversity and the capacity of the forest to support low energy, safe prescribed fires.

In the mid-80s, The Nature Conservancy in Florida recognized this problem and spent the next several decades developing a solution. Now, the Conservancy works with several private and public partners to restore hundreds of acres of longleaf forest groundcover each year. This restoration returns both the species diversity and the all-important forest regenerator – fire!

How often are fires ignited? What time of year is this practice most common? What is the fire crew like?

The amount of time between fires in southeastern longleaf forests varies. Most land managers aim for a 2-3 year return cycle. These fires can occur during any month of the year depending on the objectives of the burn. Fires that are needed to reduce large accumulations of fuel occur in the winter months. Fires that are focused on mimicking the natural fire season and result in the best effects for the native plants and animals are scheduled from mid-April through June. Just a few short days after a burn, green growth can be seen along the post-fire landscape.

We’ve got a knowledgeable and diverse fire team that conducts prescribed fire not only on our property but across the state with multiple partners. Last year, one of our Apalachicola colleagues led a prescribed fire at The Nature Conservancy’s Disney Wilderness Preserve with a full crew of women. In fact, we’ve got a great video and “Women on the Firelines” story about that work featured on our website.

Is Florida the only state to practice prescribed fire?

No, fire is an important ecological process all across North America. In fact, we even share our fire practices with crews both in other states and in other countries. Just about everywhere you find diverse upland forest and grassland habitats you will find those places managed with fire. Prescribed fire is also used in numerous agricultural applications to recycle nutrients and prepare the soil for re-planting.

Tell us about the wildlife in the longleaf pine forest:

The application of prescribed fire reduces dangerous forest fuel accumulations and recycles precious nutrients that are locked up within those downed branches and thick undergrowth. Deer, turkey, quail, as well as all of our rare species, such as the red-cockaded woodpecker, eastern indigo snake and frosted Flatwoods salamander, depend on fire to keep the forest open and to again, make the forest’s “vitamins” available to the next generation.

Less than one week following a fire, the plants in the groundcover start to re-sprout and life begins anew. Gopher tortoises are quick to take advantage of this lush, new growth.

During prescribed fires, both swallow-tailed kites and Mississippi kites gather above the fire and take advantage of the massive number of insects that take flight to escape the fire. It is not unusual to have 30 kites above a fire in May; I have even seen a swallow-tailed kite pluck a small snake from the top of an oak tree.

Species such as the Florida black bear also depend on fire to rejuvenate the forest. Like all of the other animals in the forest, the bears instinctively know how to avoid fire and quickly resume “business as usual” activities following prescribed burning.

Can you debunk any misunderstandings about fire?

Because fire is so frequently associated with destructive events, education is a constant need. Safety and public welfare are top on the list of prescribed fire managers. Much time and thinking is given to the planning of every prescribed fire in order to achieve objectives in a safe manner. An important point to make is the use of prescribed fire is actually a safety measure: if fires are not conducted by professionals during time-windows of predictable, low-intensity weather, fuels will accumulate in the forest and dangerous, difficult to control wildfires will eventually follow. It is also important to note that nearly all of the plants and animals that live in our southern forests are not only adapted to live with fire but also actually require fire to thrive.

Is there any danger involved in prescribed fire?

All fires have the potential to be dangerous – it is fire. As the complexity and inherent risk of a planned fire increase, fire managers develop sophisticated contingency plans to address those complexities and risks. If a risk cannot be mitigated, the fire does not occur.