From hurricanes to wildfires to subzero conditions, these animals have found a way to adapt to harsh climates: 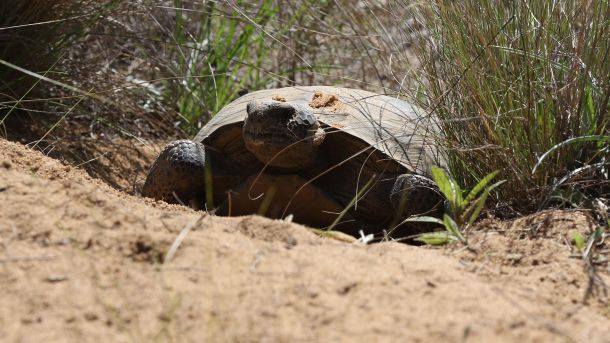 More than 300 species use a Gopher tortoise’s burrow for shelter from natural disasters in the Florida Longleaf pine sandhills. Credit: © Harriet Lawrence

The Sunshine State has a history of battling raging wildfires and powerful hurricanes.

A world away from the watery region of the Florida Everglades lies the Apalachicola region of Florida in the dry sandhills. The forest is home to hundreds of species, including the gopher tortoise, featured in PBS NATURE’s film, “Wild Florida.”

The height of the region’s dry season is in April in the Longleaf Pine forest. The forest becomes a dry tinderbox waiting to ignite. Florida is the lighting capital of the United States, and it just takes one lightning strike to set the parched landscape ablaze.

While the fire may appear a disaster, it is necessary for the forest to survive. The trees can survive the heat, but the flames clear the forest floor of unwanted scrub. Thus, allowing new longleaf pine to germinate and grow without competition.

Everything living here finds a way to cope with the blaze, including the gopher tortoise. He uses his shovel-like feet to dig burrows, which act as refuges from the flames.

More than 300 species use these tunnels to shelter from not only the fire but also hurricanes and all the extremes Florida’s climate can throw at them. For this reason, the gopher tortoise is considered one of the most important animals that live in these forests.

The Wood Frog is the only frog that lives north of the Arctic Circle. These frogs are typically found in forests throughout the northeastern United States, as well as in Alaska. They are found in smaller numbers as far south as Alabama and northwest into Idaho, according to the National Wildlife Federation (NWF).

To survive colder climates, these frogs have adapted a unique mechanism. When the temperature drops, they stop breathing and their hearts stop beating. They appear to be coated in ice during the colder months.

According to a study led by Don Larson of the University of Alaska – Fairbanks, wood frogs freeze up to 60 percent of their bodies during Alaskan winters. The scientists tracked frogs throughout the harsh winter season, where temperatures ranged from minus 9 degrees Celsius (15.8 F) to minus 18 C (minus 0.4 F).

Their bodies produce a special antifreeze substance that prevents ice from freezing within their cells, which would be deadly. Ice does form, however, in the spaces between the cells. When the weather warms, the frogs thaw and begin feeding and mating again. Prior to freezing for the entire season, the scientists observed that frogs underwent 10-15 cycles of freezing and then thawing.

Before the Vikings arrived in Iceland in 874 A.D., only one other land mammal had colonized this savage landscape: the Arctic fox. Arctic foxes can exist in temperatures of minus 70 F because of their incredibly dense, warm fur.

Their dense fur changes with the seasons. The Arctic fox is white during the winter to blend into the snow and ice. However, its coat becomes thinner and changes to a brown and yellow color during the summer, according to the World Wildlife Foundation (WWF). This change in color helps the Arctic fox hunt birds, rodents and fish.

It also has furry soles, short ears, and a short muzzle, which all help it survive the chilly climate. The Arctic fox’s tail is especially useful as a warm cover in cold weather.

They live in burrows, and in a blizzard, they may tunnel into the snow to create shelter.