This piece comes to us from the Wildlife Conservation Society (WCS). To honor Women’s History Month, WCS and Nature are sharing stories of nature and conservation.

When I was a young girl, my cousin was on the first-ever US women’s Olympic ice hockey team. I remember their slogan: “Don’t tell me what I can’t do.” At the time, I didn’t really get it. Growing up, I was always taught I could do anything and to dream big.

I was lucky to have great teachers. There was my mom, who taught me to love nature, and my dad, who worked at the Bronx Zoo (a pioneer in supporting women scientists). My dad would bring home snow leopard stickers that read, “Is there no place on Earth for me?” I would stick them on all the kids’ lockers at school.

When I was 16, I was the youngest participant in a National Outdoor Leadership School semester. It was led by a team of mostly-female instructors who taught us how to survive in the wilderness. It was the first time I had ever seen places where you could walk hundreds of miles without seeing anyone.

My favorite section was paddling down the Yampa River in Colorado. I remember the instructors telling us that at one point, there were plans to dam the river and flood the canyon. A group of citizens rallied together to fight the Bureau of Reclamation and won! I thought then that was what I wanted to do—to protect the last of our wild places.

I returned to Colorado for college, majoring in biology. My first job was working for the National Forest Service, counting endangered butterflies at the top of 14,000-foot mountains. I was the only woman who applied, and I lived all summer in a small trailer with three men. Every day, we had to hike those peaks. I had just had ACL surgery that winter, and they thought that I would slow them down. They were wrong.

It wasn’t until my junior year that I finally took an ornithology course. I had a professor who was so passionate about birds. He would literally lose his mind every time he saw a rare behavior or species. I remember him screaming “copulation!! COPULATION!!!!” He asked if I would help lead birders out to the lekking grounds of the endangered Gunnison sage grouse. I was hooked on birding.

Stopping to say hi to “Chomper” the goat while walking around the Queens Zoo. Photo credit: Julie Larsen Maher ©WCS.

When getting my graduate certificate in conservation biology at Fordham University, I had another great teacher (and passionate birder), Alan Clark. He taught me to look at conservation from both a scientific and policy perspective. Meanwhile, I had landed my first job as an educator at the Maritime Aquarium in Norwalk, teaching youth about aquatic birds and other marine life.

In classes at night, my frustrations would grow at our government’s inability to protect birds, while during the day I was inspiring people to care about them. And suddenly, I realized that I had found a way to live out my passion.

I have now worked in conservation education for twelve years. Since joining the Wildlife Conservation Society’s Education Department, I have worn many hats. I love reaching so many people in New York City through programs like Project TRUE (Teens Researching Urban Ecology), where we teach youth how to do field research out in the city’s parks. Nothing compares to seeing a young person put on a pair of waders for the first time and crawl out into the mud to encounter a whole new world.

When I was accepted into the Advanced Inquiry Program (Miami University of Ohio and WCS’s graduate program), I jumped at the opportunity to further develop my skills as a biologist and educator, while advancing avian conservation. I’d heard about Bird Friendly coffee when they started selling it at the Naples Zoo. The Smithsonian Migratory Bird Center’s Bird Friendly coffee program certifies farms that grow their coffee in shade to avoid cutting down rainforests. It sets the strictest criteria for preserving habitat. I wondered if I could bring Bird Friendly coffee to WCS’s parks in New York City.

A lot of people said it couldn’t be done, but I wanted to try. I did the research and brought the right people together. It took work—lots of surveys and approaching visitors in the zoo asking them if they’d buy Bird Friendly coffee—but in the end, it paid off. 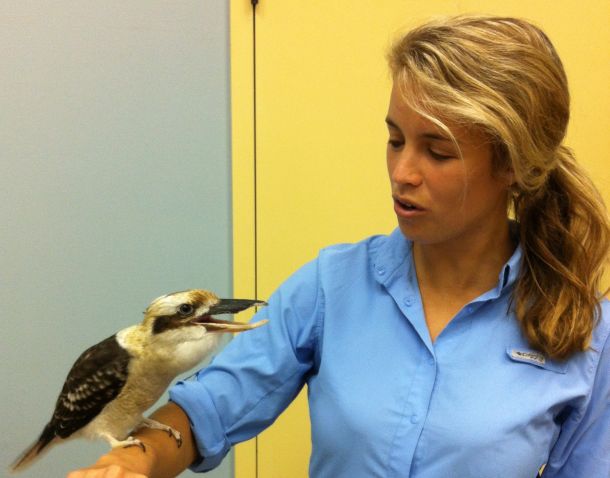 In the spring of 2018, WCS’s Central Park Zoo started selling Bird Friendly coffee. Now we sell it at our other three zoos and our aquarium. I was lucky to have mentors like Craig Piper, Director of City Zoos, who patiently read my reports and was a huge supporter of the project. The movement is growing. Every day, we’re educating students and visitors. I’ve presented on Bird Friendly coffee at our national zoo conference and more zoos and aquariums are selling it.

As conservationists, sometimes the biodiversity crisis can seem overwhelming, but with actions like these, we really can make a difference. I feel so fortunate that I get to spend my days at work inspiring others to do more to protect wildlife. We really can be champions when we are passionate about something. And don’t ever let anyone tell you what you can’t do.