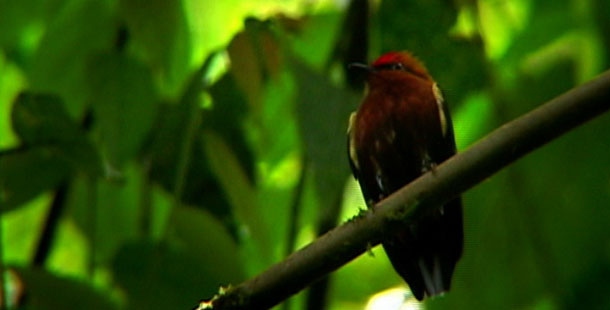 Kim Bostwick loves slow-motion instant replay. Not because she’s a huge sports fan, but because special high-speed video cameras have allowed her to solve a long-standing mystery: how unusual jungle-dwelling birds called manakins use their feathers to produce remarkable rhythmic buzzes and hums.

“Manakins have weird, pretty extreme behavior,” says Bostwick, an evolutionary ornithologist who makes a memorable appearance in the first episode of NATURE’s Deep Jungle. “They are very, very interesting birds.”

Bostwick became interested in animal behavior as a child. “I was a horse lover, then an animal lover,” she recalls. In high school, a gifted biology teacher nurtured that interest, which Bostwick carried to Cornell University (where she now works). There, she discovered bird watching — and got the itch to travel to the tropics, home of some of the globe’s most interesting bird species. In 1997, she entered graduate school, pursuing a doctorate on how an animal’s behavior affects the evolution of the shape of its body.

Her subject: manakins, small, sparrow-sized birds that abound in many tropical forests in South and Central America. There are about 40 kinds, about half of which use their wings and bodies to make a dizzying array of buzzes, snaps, and hums. It is almost always the males that make the noises during elaborate courtship displays designed to entice a female or defend territory.

The first problem Bostwick faced was figuring out exactly how the manakins she was studying were making the noises. “Everybody had a guess as to how they made sound,” she says, “but nobody had nailed it down.”

To find out, Bostwick spent years dissecting the wings of manakins in museum collections and traveling to the forest to watch and film them in the wild. The results, however, were disappointing. At the time, video cameras captured just 30 frames of action a second — far too slow to see the rapid, almost crazed movements of a male manakin.

Then, along came a much faster camera. It could capture a few seconds of action at up to 1,000 frames per second. Still, there was uncertainty. “My first question was whether I could get this thing to work in the jungle,” says Bostwick. “Could I get close enough to the birds? Would there be enough light? And even if the conditions were perfect, what would I see?”

Once she mastered the camera, what Bostwick saw — and what viewers of NATURE’s DEEP JUNGLE see — is remarkable. In super-slow motion, the male manakins lift their oddly shaped wings over their back and literally snap them together, or perform looping dives and flips in order to produce sounds and get in position to mate with a female. “Now, we really know what is going on,” Bostwick says.

Since then, Bostwick has captured a number of memorable scenes. In one, she filmed three male red-capped manakins trying to impress a female. “The air was literally popping; it sounded like static electricity,” she says. Using the camera, she ultimately discovered that the red-capped males used three different kinds of noise-making motions, depending on the courtship display. “It’s behavior that is completely hidden to the eye. … We never would have known without that camera,” she says.

The images are also helping sort out the manakin’s evolutionary history. While many birds have evolved wings that enable them to fly long distances or dodge predators, Bostwick says male manakins have evolved “really weird wings” that serve another purpose: “They want to blow a female’s mind. That’s the most important thing.”