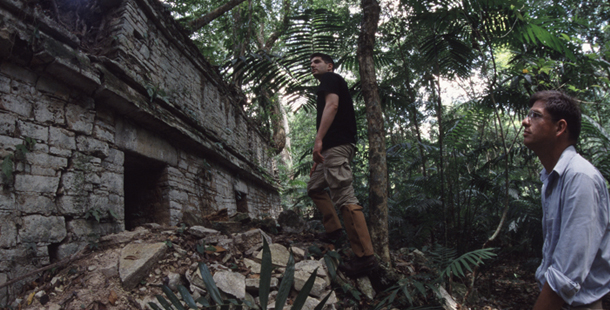 In 1839, an American diplomat named John Lloyd Stephens was exploring the jungles of western Honduras when he came upon an abandoned city of stone rising out of the thick vines and brush.

“The city was desolate,” he later wrote. “It lay before us like a shattered bark in the midst of the ocean, her masts gone, her name effaced, her crew perished, and none to tell whence she came, to whom she belonged, how long her voyage, or what caused her destruction. … All was mystery, impenetrable mystery.”

Today, archaeologists know that Stephens stumbled across Copan, one of the great monumental cities built about 1,500 years ago by the ancient Maya. Researchers believe that up to 3.4 million Maya once roamed the jungles and plains of Central America before their civilization collapsed, leaving behind less than a million people — and scores of ruined cities complete with massive stone pyramids, ceremonial plazas, and carved monuments. As NATURE’s Deep Jungle: The Beast Within shows, many such structures are still hidden within the jungle, waiting to be uncovered by researchers.

The Maya’s Copan isn’t the only great jungle city that now feels like a ghost town. Angkor, located in Cambodia, is another metropolis that flourished in the forests. Archaeologists believe that this ancient city once covered 835 square miles and supported as many as a million people.

What happened to these previously thriving cultural centers? Although there is still much debate, researchers increasingly believe that the cities simply became too big for the local environment to support. Forest clearing may have altered local climates, perhaps reducing water supplies and making farmers more vulnerable to periodic bouts of drought or disease. According to this hypothesis, deforestation started a cultural domino effect, sparking violent conflicts over natural resources that ultimately spiraled out of control, forcing massive migration to safer areas and leaving these once vibrant cities to crumble with neglect.

Today, new technologies are allowing cities to sprout again in the jungles of the Amazon and South Asia. In the ancient Maya and Angkor civilizations, local resources were eventually strained. Now, deep wells bring water, while food and energy flow from sources that are often continents away. It’s still too early to tell if, this time around, humans will win their battle to survive within the jungle.

In the meantime, city residents continue to discover indigenous tribes who have long called the jungle their home. Every year, officials in Brazil, Indonesia, and other tropical nations report making contact with previously unknown groups of jungle dwellers who speak their own languages and have had virtually no contact with the outside world. In Indonesia, for instance, the government recently recognized the Vahudate and Aukedate tribes — tall, dark people with curly hair and an unusual form of sign language. In Brazil, specialists are still debating whether several Amazon tribes are truly new, or simply subgroups of known forest tribes.

Whatever the answers to such questions, one thing is clear: these people of the jungle know their environment intimately. In NATURE’s Deep Jungle, for instance, viewers meet the BaAka of Central Africa as they help a researcher track western lowland gorillas. The BaAka are one of several tribes known as pygmies because of their short stature. Adults often reach just four feet in height.

There are about 20,000 BaAka tribe members living in the forests of the Dzanga-Sangha national park. They live off the jungle, stalking and catching game with nets and weapons, and harvesting a wide array of fruits and roots. They build their shelter with few flexible poles and some leaves or bark. Such skills have led the BaAka to become invaluable guides to researchers in one of the most challenging environments on Earth, the jungle.