The jungles of central Africa are home to the forest elephant. Unlike their better-known cousins, the African elephants of the open savannahs, forest elephants are adapted to living in dense woodlands. They have straight tusks, for instance, since curved ones might get caught in vines and brush. And they tend to be smaller and stockier than savannah elephants.

Forest elephants are also less understood by scientists. In part, that’s because tracking these animals across hundreds of miles of forest is difficult. To get around that problem, researchers have begun fitting the elephants with electronic tags that send signals to an orbiting satellite. Researchers can now track these animals for a year or more as they move around the forest.

Still, it is risky work — sedating and putting a tag on a full-grown elephant can be dangerous. In NATURE’s Deep Jungle, for instance, viewers watch as a team led by Stephen Blake of the Wildlife Conservation Society tries to tag an elephant in Gabon. NATURE recently spoke with Blake about his work. 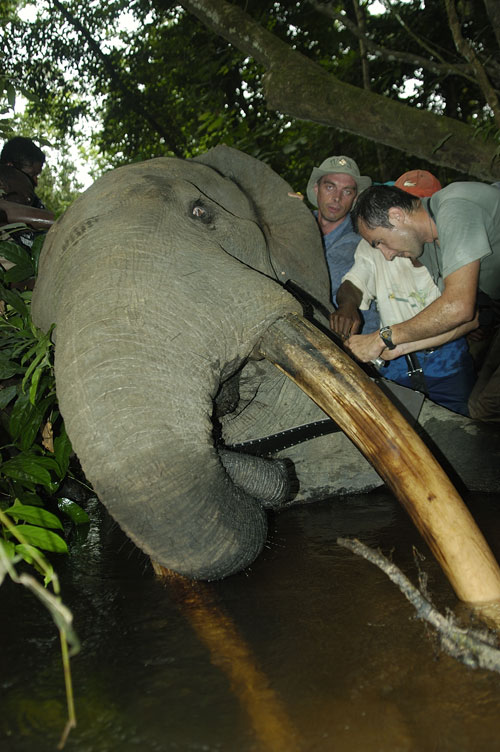 How did you get involved in tagging forest elephants?

Stephen Blake: I really came in through the back door. I had no idea when I was younger I’d end up doing something like this. After college, I ended up working in a zoo, and became a zookeeper working with gorillas. The zoo set up a gorilla nursery in Congo as part of a conservation program … and I went there, and ended up going back to school and doing a Ph.D. on forest elephants, trying to figure out where they were and where they like to go. We didn’t have the first clue back then about how far they were capable of ranging.

What do we know now?

Well, putting these tags on has allowed us to follow individuals like never before. We’ve found that they have a home range that might be up to 2,000 square kilometers [1,243 square miles] — that’s almost as big as the range of a savannah elephant. Sometimes they’ll stay put, however. We’ve got one now that appears to have found a patch of vegetation, and the old boy hasn’t moved for a few months. He likes it there.

How many elephants have you tagged, and how long do the tags last?

All in all, we have tagged about 36 elephants, about half male and half female. About 20 of those tags are still working. And right now, we’ve got no plans to tag more. The tags used to last about 12 to 18 months, but the newer ones last up to four years. They naturally fall off the animal after five or six years … they just get frayed and torn up.

How is forest elephant conservation going?

Unfortunately, forest elephants are getting hammered. The population appears to be shrinking, except in a few small areas. The last reliable survey in the late 1980s showed about 170,000 animals. There are probably less than 100,000 today.

What’s happening to them?

Unregulated poaching is the biggest problem. The motivation is mostly to get the ivory [tusks], but there is some hunting for meat and skin too. Conservation has been made more difficult because of the political instability in central Africa. But there are some signs of optimism in some places.

I’m about to move with my family back to Gabon. We’re starting some interesting projects aimed at being able to predict where the elephants will be, based on vegetation types and fruit production. That will help us identify key conservation areas and, we hope, help reintroduce elephants into some of their former range.

To track the elephants on the Web, visit: http://maps.geog.umd.edu/carpemapper/forestelephants.asp.

Sharkland
Dolphins: Spy in the Pod | Part 2
Voyage of the Lonely Turtle
Deep Jungle: The Beast Within
The Good, the Bad, and the Grizzly
Dogs in the Land of Lions