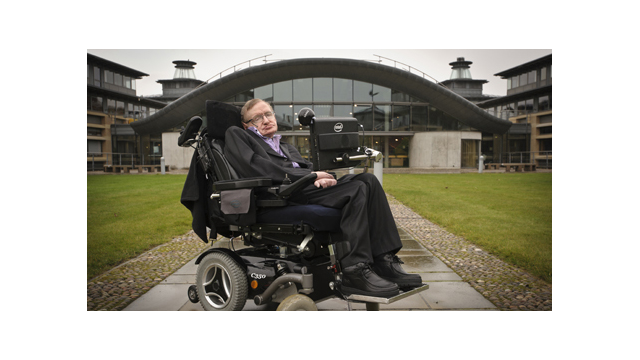 Stephen Hawking outside the Dep. of Applied Mathematics
Jason Bye

– A BRIEF HISTORY OF MINE (w.t.) is Filled With Insights From High-Profile Fans and Colleagues –

A BRIEF HISTORY OF MINE features exclusive access to Hawking’s life story, told largely in his own words. It includes dramatic accounts of his life from childhood through university, intimate footage of Hawking today, including his home routine and his work life at the University of Cambridge, archival footage and candid insights from family members, friends and colleagues. Computer-generated imagery (CGI) illustrates some of Hawking’s remarkable discoveries, such as the nature of black holes and the Big Bang Theory.

“If you had asked me 40 years ago if I ever thought I would be talking in front of a sellout crowd and be a part of popular culture, I would have laughed,” said Hawking. “But, if my getting involved in this has encouraged people to question our universe, then I am happy [to have done it].”

The film provides a close look into his daily routine, including how he travels, how he gets to work and some of his favorite pastimes — including listening to classical music. Technology and an army of caregivers allow Hawking to enjoy life, but the film also showcases more difficult aspects, such as his battle to continue communicating through his computer, a process he meets about regularly with technology experts. In addition to the A-list contributors, interviewees include Hawking’s ex-wife, his biographer, past and current students and graduate assistants, nurses and his literary agent, among others.

“We are thrilled to bring this exclusive program about Stephen Hawking to PBS,” said Beth Hoppe, Chief Programming Executive and General Manager, General Audience Programming, PBS. “A BRIEF HISTORY OF MINE opens up a new window into his life and achievements as never before and we’re very proud to be partners on this film.”

“We are honored to have had the opportunity to film and capture the most intimate details of Stephen Hawking’s life,” added Ben Bowie, Executive Producer. “Through Hawking’s own words, as well as those closest to him, PBS viewers have an opportunity to get a fresh perspective of one of the greatest scientists of our time.”

Stephen Hawking has sold more than 10 million books, spoken in front of thousands of people at sell-out live shows and appeared on iconic TV shows such as “The Simpsons” and “Star Trek.” He counts many of the most famous people on the planet as friends. He has met with the pope, experienced zero gravity, received the Presidential Medal of Freedom and much more. He became paralyzed due to motor neuron disease, but his intellectual brilliance, his refusal to quit and his trademark dry wit — all showcased in A BRIEF HISTORY OF MINE — have propelled him to international fame and celebrity.

About PBS PBS, with its nearly 360 member stations, offers all Americans the opportunity to explore new ideas and new worlds through television and
online content. Each month, PBS reaches nearly 123 million people through television and more than 21 million people online, inviting them to experience the worlds of science, history, nature and public affairs; to hear diverse viewpoints; and to take front row seats to world-class drama and performances. PBS’ broad array of programs has been consistently honored by the industry’s most coveted award competitions. Teachers of children from pre-K through 12th grade turn to PBS for digital content and services that help bring classroom lessons to life. PBS’ premier children’s TV programming and its website, pbskids.org, are parents’ and teachers’ most trusted partners in inspiring and nurturing curiosity and love of learning in children. More information about PBS is available at www.pbs.org, one of the leading dot-org websites on the Internet, or by following PBS on Twitter, Facebook or through our apps for mobile devices.  Specific program information and updates for press are available at pbs.org/pressroom or by following PBS Pressroom on Twitter.