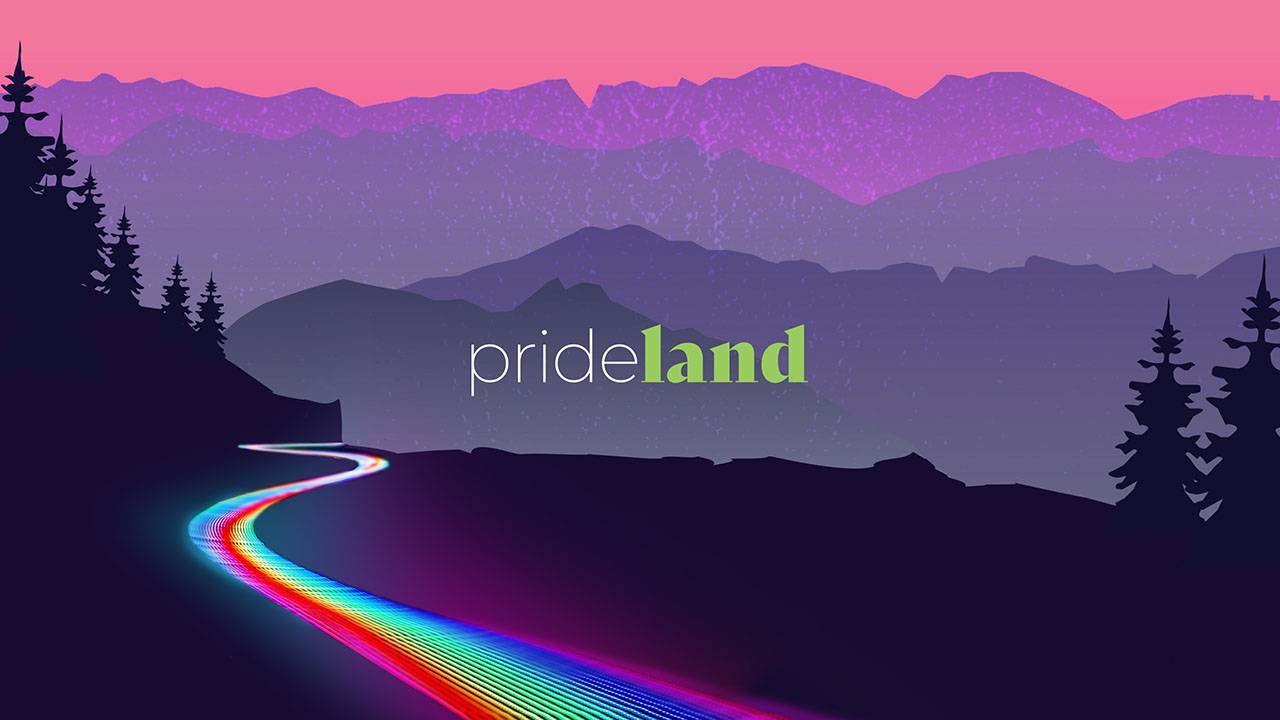 ARLINGTON, VA; May 12, 2020 – PBS is celebrating LGTBQ+ Pride Month with the launch of PRIDELAND, a new one-hour special and short-form digital series following host and actor Dyllón Burnside (from FX’s “Pose”) on a journey across the South. The six-episode short-form series will launch on PBS Voices, a new documentary-focused YouTube Channel by PBS Digital Studios, beginning Tuesday, May 26. A one-hour companion special, also hosted by Burnside, will premiere on Friday, June 12 at 9:00 p.m. ET (check local listings) on PBS, PBS.org and the PBS Video App.

PRIDELAND, produced by Tiny Horse, opens a window into the world of modern-day LGBTQ+ life in America. The series highlights authentic personal stories brought to life through Burnside’s curious, exploratory lens. As an LGBTQ+ advocate, he guides viewers into the South’s various LGBTQ+ communities, connecting with people of different backgrounds, locations, experiences and points of view.

“Being a queer boy raised in the South, I had distinct memories of feeling like I could never be my authentic-self there, so I left seeking acceptance and affirming communities. But I never left my southern roots,” Burnside said. “I wanted to go back as an adult and see if things had changed, and I’m proud to report that they have. Although there are still many challenges for queer folks in the south, which is home to more LGBTQ+ adults than anywhere else in the U.S., I’m in awe of everyone I met who are creating change in their communities. I believe that authenticity is a superpower, and these queer heroes and allies are truly inspirational.”

PRIDELAND addresses how and why attitudes towards the community have changed, the ongoing challenges still faced by LGBTQ+ people, as well as stories of celebration and the vital role of allies. In their own voices, members of these communities answer questions that help to create real understanding of who they are and what it means to be their authentic selves in the places they call home.

“LGBTQ+ culture has always been a part of the American story, but a lack of understanding and representation still exists in many regions of the country,” said Brandon Arolfo, Head of PBS Digital Studios. “With the launch of PRIDELAND on PBS Voices, PBS is excited to travel into the heart of America to see first-hand how the United States is changing from within, and how so many LGBTQ+ people and their allies are working to ensure they can live their lives with pride.”

To ensure PRIDELAND reaches a variety of audiences, the program was designed for both digital and broadcast presentation.

“PBS is committed to bringing important, forward-thinking programs like PRIDELAND to Americans across multiple platforms,” Pamela A. Aguilar, Executive in Charge and Senior Director, Programming & Development at PBS said. “We’re excited to present a one-hour broadcast special alongside the digital series and provide audiences with unique and quality experiences wherever they consume media.”

Overviews of both the PRIDELAND digital series and one-hour special are provided below:

Episode 1: “Out, Proud & Southern: Dyllón Burnside’s Story”
Premieres:Tuesday, May 26 on PBS Voices
Description: Dyllón Burnside begins his journey by setting the stage of the series with his personal story of growing up in Pensacola, Florida. He explores what the South means to him, and why he left after getting fired from his church for coming out. He returns to discover that the South is home to more queer people than any other region in the U.S. with more than one-third of all LGBTQ+ adult Americans live below the Mason Dixon line. He also learns that the region has the most negative LGBTQ+ policies in the country and meets different people fighting for equal rights, starting with Carmarion D. Anderson, HRC Alabama State Director, the first transgender woman of color to hold such a leadership position.

Episode 2: “An Openly Gay Pastor’s Journey to Acceptance in the Bible Belt”
Premieres: Tuesday, June 2 on PBS Voices
Description: The LGBTQ+ experience is as diverse and varied as the individuals who comprise it. While some still find rejection close to home, others are finding more and more acceptance in communities of origin or those they create. In this episode, Dyllón Burnside introduces viewers to Rob Lowry, an openly gay minister at a small, but mainstream church in Jackson, Mississippi. He was offered the job before the church knew he was gay, but they accepted him with open arms when he told them he would only take the position if he could lead while openly gay. Lowry is creating just that kind of community—open to all who take the command to “love thy neighbor as thy would thyself” to heart and in practice.

Episode 3: “Polyamory, Demisexuality, and Being Transgender in the South”
Premieres: Tuesday, June 9 on PBS Voices
Description: Dyllón Burnside sits down with a group of diverse LGBTQ+ members to learn how to embrace sex positivity and maneuver the modern dating scene. They talk candidly about asexuality, polyamorous relationships and how to manage diverging expectations in the queer community.

Episode 4: “The Heartwarming Story of One of Alabama’s First Same-Sex Adoptions”
Premieres: Tuesday, June 16 on PBS Voices
Description: Dyllón Burnside is invited into the home of a lesbian couple who wouldn’t let anyone or any law get in the way of them getting married and adopting the child of their dreams. He listens to how they’ve overcome the unique challenges of forming a family in the South, and learns what obstacles remain for other LGBTQ+ people in their home state of Alabama.

Episode 5: “Championing LGBTQ+ Healthcare in Mississippi”
Premieres: Tuesday, June 23 on PBS Voices
Description: Dyllón Burnside meets Scott Rodgers, M.D. and Lillian J. Houston, M.D., two doctors who founded the Center for LGBTQ Health at the University of Mississippi Medical Center,  one of the few LGBTQ+ clinics in Mississippi to provide quality healthcare without fear of discrimination. In many parts of the South it’s legal for doctors to deny services to LGBTQ+ people based on their religious beliefs. To make matters worse, the South has the highest concentration of people living with HIV/AIDS in the U.S. These doctors and their team are determined to address these issues head-on.

Episode 6: “The Bakery Battleground: The Mississippi Baker Standing Up For Gay Rights”
Premieres: Tuesday, June 30 on PBS Voices
Description: Dyllón Burnside examines the crucial role of allies in advancing LGBTQ+ rights and how religious beliefs have sometimes been used as a pretext for discrimination. In this episode, he visits Mitchell Moore, a baker in the heart of the Bible Belt who risks his business, Campbell’s Bakery, to take a stand for LGBTQ+ rights.

One-Hour Special: PRIDELAND
Premieres:  Friday, June 12, 9:00-10:00 p.m. ET on PBS
Description:  Follow Dyllón Burnside on a journey across the American South to meet diverse members of the LGBTQ+ community. From a lesbian rodeo champ in Texas to an African American mayor ally in Alabama, he discovers how LGBTQ+ Americans are finding ways to live authentically and with pride in the modern South.

The digital episodes of PRIDELAND will kick off PBS Voices, a themed channel bringing together curated content from member stations across the country to fulfill viewers’ curious minds. Each program featured on PBS Voices will feature an array of fascinating, relatable miniseries celebrating shared human experiences.

PRIDELAND is a Tiny Horse production for PBS. Pamela A. Aguilar and Brandon Arolfo are Executives in Charge for PBS; Jon Reynaga and Melanie Capacia Johnson are Executive Producers for Tiny Horse. The program is produced and directed by Katherine Linton. Critical research and special consultation was provided by the Movement Advancement Project.

In addition to the debut of PRIDELAND, PBS will also offer encore presentations and streaming of a vast array of LGBTQ+ focused programing throughout the month of June on PBS, PBS.org, PBS Video App and PBS Passport. Programs include AMERICAN EXPERIENCE “Stonewall Uprising,” AMERICAN MASTERS “Terrance McNally” and THE LAVENDER SCARE. An overview of additional programming is available here.

For more information on PBS’s Pride Month programming, the new PRIDELAND one-hour special and digital series, and PBS Voices, visit PBS.org and the PBS YouTube Channel. Viewers are also encouraged to engage in online conversation by tagging @PBS and using #PridelandPBS and #PBSVoices on Facebook, Twitter and Instagram.

About Dyllón Burnside, Host of PRIDELAND
A multi-hyphenate performer, creator and recording artist, Dyllón Burnside has appeared in notable stage, television and film projects with some of the best in the business. He currently stars as 'Ricky' in Ryan Murphy’s Emmy-nominated FX series, "Pose" alongside Billy Porter and MJ Rodriguez, and first captivated audiences with his Broadway debut, starring as Anthony in 2014’s Holler if Ya Hear Me, a hip-hop musical inspired by the music and lyrics of Tupac Shakur. Burnside also appeared as a Lost Boy in NBC’s "Peter Pan Live!" and in the critically-acclaimed series "High Maintenance" on HBO, all while completing his final year at the prestigious CAP21 Conservatory for music theatre and The New School where he earned a bachelor’s degree in Media Studies and Writing. He began his career at 12 years old as a member of the Hip-Hop/R&B boy band 3D touring the country and performing alongside Stevie Wonder and Rihanna. Passionate about producing social change content, Burnside is currently working on a forthcoming new solo project and will release new music in the months ahead. Fans are invited to engage in online conversation about Burnside’s new PBS series, PRIDELAND,  by tagging @dyllonburnside and using #PridelandPBS and #PBSVoices on Facebook, Twitter and Instagram. Feel free to also visit his website and Spotify.

About PBS
PBS, with more than 330 member stations, offers all Americans the opportunity to explore new ideas and new worlds through television and digital content. Each month, PBS reaches over 126 million people through television and 26 million people online, inviting them to experience the worlds of science, history, nature and public affairs; to hear diverse viewpoints; and to take front row seats to world-class drama and performances. PBS’ broad array of programs has been consistently honored by the industry’s most coveted award competitions. Teachers of children from pre-K through 12th grade turn to PBS for digital content and services that help bring classroom lessons to life. Decades of research confirms that PBS’ premier children’s media service, PBS KIDS, helps children build critical literacy, math and social-emotional skills, enabling them to find success in school and life. Delivered through member stations, PBS KIDS offers high-quality educational content on TV – including a 24/7 channel, online at pbskids.org, via an array of mobile apps and in communities across America. More information about PBS is available at www.pbs.org, one of the leading dot-org websites on the internet, or by following PBS on Twitter, Facebook or through our apps for mobile and connected devices. Specific program information and updates for press are available by following PBS Pressroom on Twitter.

About Tiny Horse
Tiny Horse is an award-winning entertainment company that creates, amplifies and distributes highly engaging programming across streaming, linear and social channels. With a grounding in traditional editorial, production and marketing, they tell stories coordinated in a mosaic across many platforms to engage audiences whenever and wherever they may find themselves viewing and engaging with stories. For more information visit www.tinyhorse.com.