Posted by PBS on 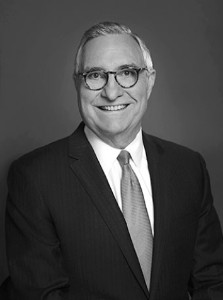 Galmiche served as a force for positive change for public media by focusing on new forms of community engagement and expanding the reach of the station's programming and content through four local channels and digital distribution. Galmiche passed at age 71 in April of 2019. His wife Rosemary, along with their children, accepted the award on his behalf from PBS President and CEO Paula Kerger during the PBS Annual Meeting in Nashville.

“Jack Galmiche was an extraordinary leader who believed passionately in the power of public media to enrich lives and uplift communities,” Kerger said. “He leaves an enduring legacy of impact, and his contributions to his community and country will be long felt.”

Galmiche took pride in his hometown of St. Louis and played professional soccer for the St. Louis Stars, followed by several leadership roles in sports management with the NHL’s St. Louis Blues and the United States Football League.

Galmiche liked to say that Channel 9 shaped his early learning as a child. His mother turned on Channel 9 for her four sons because it was a safe and trusted place for learning. Her passion for educational television, he said, is what drove his work.

While at the Nine Network, Galmiche championed the American Graduate initiative, early education for the youngest and most vulnerable learners, the local arts, science and technology, entrepreneurship, the environment, and more. He also spearheaded the Nine Center for Public Engagement, a first of its kind community engagement center in the Nine Network.

The Daniel K. Miller Station Leadership Award is named in honor of Dan Miller, a longtime executive director and general manager of Iowa Public Television who passed away in February 2018. Receiving the inaugural PBS Station Leadership Award in 2016, Miller was recognized for his outstanding contributions to public media as a leader at the local level as well as across the system as a whole. Previous honorees include late executive director of Arkansas Educational Television Network Allen Weatherly (2017) and Wisconsin Public Media director Malcom Brett (2018).

About PBS
PBS, with more than 330 member stations, offers all Americans the opportunity to explore new ideas and new worlds through television and digital content. Each month, PBS reaches over 120 million people through television and 26 million people online, inviting them to experience the worlds of science, history, nature and public affairs; to hear diverse viewpoints; and to take front row seats to world-class drama and performances. PBS’ broad array of programs has been consistently honored by the industry’s most coveted award competitions. Teachers of children from pre-K through 12th grade turn to PBS for digital content and services that help bring classroom lessons to life. Decades of research confirms that PBS’ premier children’s media service, PBS KIDS, helps children build critical literacy, math and social-emotional skills, enabling them to find success in school and life. Delivered through member stations, PBS KIDS offers high-quality educational content on TV— including a 24/7 channel, online at pbskids.org, via an array of mobile apps and in communities across America. More information about PBS is available at www.pbs.org, one of the leading dot-org websites on the internet, or by following PBS on Twitter, Facebook or through our apps for mobile and connected devices. Specific program information and updates for press are available at pbs.org/pressroom or by following PBS Pressroom on Twitter.