ARLINGTON, VA; APRIL 24, 2014 (UPDATED) -- PBS will present a lineup of programming timed to Memorial Day 2014, as well as this year’s 70th anniversary of D-Day. The centerpiece of PBS’ salute to veterans is the 25th installment of the live broadcast of the NATIONAL MEMORIAL DAY CONCERT, co-hosted for the ninth consecutive year by Joe Mantegna and Gary Sinise. PBS also pays tribute to veterans and their families with COMING BACK WITH WES MOORE, Moore’s search for answers to some of the most difficult questions facing returning vets.

Honoring the anniversary of one of the greatest invasions in history, new special D-DAY 360 uses cutting-edge technology to bring the battlefield to life as never before. PBS’ premier science series NOVA will present “D-Day’s Sunken Secrets,” which follows the collaboration among military historians, archaeologists and specialist divers to survey the underwater wreck sites bordering the D-Day beachheads.

“The history of our country is very much the history of the brave men and women who have fought to protect our rights and our safety, and PBS is proud to share their stories with fellow veterans and the larger public,” said Beth Hoppe, PBS Chief Programming Executive and General Manager, General Audience Programming.  “In the coming months, PBS and CPB will unveil additional programming and resources to serve veterans and their families.”

COMING BACK WITH WES MOORE, a new three-episode series executive produced by best-selling author and U.S. army veteran Wes Moore, tells the story of his search for answers to some of the most difficult questions facing vets returning from war. Moore’s journey, spurred by the suicide of one of his oldest friends and a fellow officer, takes him into the personal lives of different soldiers as they attempt to reintegrate into society, establish new identities and — for many — find a new mission. Each episode focuses on a different stage of coming home: “Coming Back” (May 13), “Fitting In” (May 20) and “Moving Forward” (May 27).

Joe Mantegna and Gary Sinise co-host the 25th anniversary broadcast of this night of remembrance honoring the service and sacrifice of our men and women in uniform, their families at home and all those who have given their lives for our country. They will be joined by Colin L. Powell, Dianne Wiest, Danielle Bradbery, Megan Hilty, Jackie Evancho, Doc Severinsen and Anthony Kearns in performance with the National Symphony Orchestra under the direction of top pops conductor Jack Everly. Featuring a unique blend of uplifting musical performances and dramatic readings, the multi- award-winning program airs from the West Lawn of the U.S. Capitol before a concert audience of hundreds of thousands, millions more at home, as well as to our troops serving around the world on the American Forces Network. Mantegna and Sinise are co-hosting for the ninth consecutive year.

D-Day was a logistical effort on a scale never seen before or since. On the day itself, 3,000 planes dropped 23,000 airborne troops behind German lines, and 7,000 ships delivered around 20,000 military vehicles and 130,000 soldiers onto the beaches. Once on the shore, the troops had to negotiate two million mines buried in the sand, 46,000 fearsome beach obstacles and hundreds of miles of barbed wire, while dodging the shells and bullets fired by 40,000 German defenders. This film takes advantage of LiDAR technology to re-create the landscape and allow viewers to switch effortlessly between the macro and the micro — pulling back for the big picture and zooming in to a close-up of a single soldier on the battlefield.

On June 6, 1944, the Allies launched the D-Day invasion against the heavily defended Normandy beaches to liberate Europe from the Nazis. Throughout the operation, hundreds of ships sank while running the gauntlet of mines and bunkers, creating one of the world’s largest underwater archaeological sites. Now, 70 years later, teams of historians, archaeologists and specialist use submersibles, underwater robots and the latest 3D mapping tools to discover, identify and plot the relics on the sea floor. “D-Day’s Sunken Secrets” also highlights the story of an often neglected group of heroes essential to the success of the D-Day invasion and to winning the war: the engineers.

Major funding for COMING BACK WITH WES MOORE is provided by the Corporation for Public Broadcasting’s (CPB) Diversity and Innovation Fund, which supports content that engages diverse viewers and encourages the use of emerging technologies to reach new audiences, and PBS. 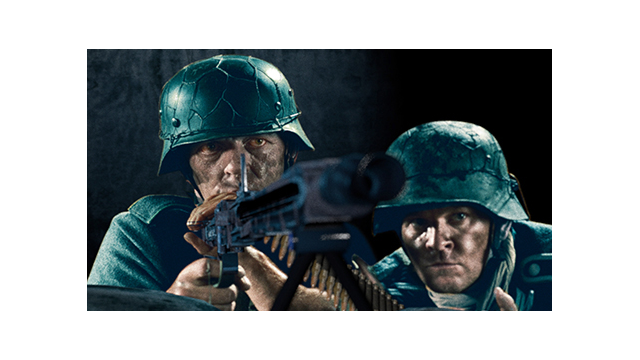