WASHINGTON — If saying things 100 times could make them true, President Donald Trump’s account of how the U.S. is doing with the coronavirus would be true.

COVID-19 testing would be the envy of the world, the economy would be on the cusp of roaring back, the threat would be receding in a pandemic that has sickened more than 3.1 million Americans and killed more than 134,000.

But repetition doesn’t make for reality. The U.S. is taking a disproportionate hit from the coronavirus globally and does not have it under control.

A look at how rhetoric from the past week compares with the facts on various fronts:

TRUMP: “Deaths in the U.S. are way down.” — tweet Monday, one of at least a half dozen heralding a drop in daily deaths from the virus.

THE FACTS: It’s true that deaths dipped as infections spiked in many parts of the country. But deaths lag sickness. And now, the widely expected upturn in U.S. deaths has begun, driven by fatalities in states in the South and West, according to data analyzed by The Associated Press. 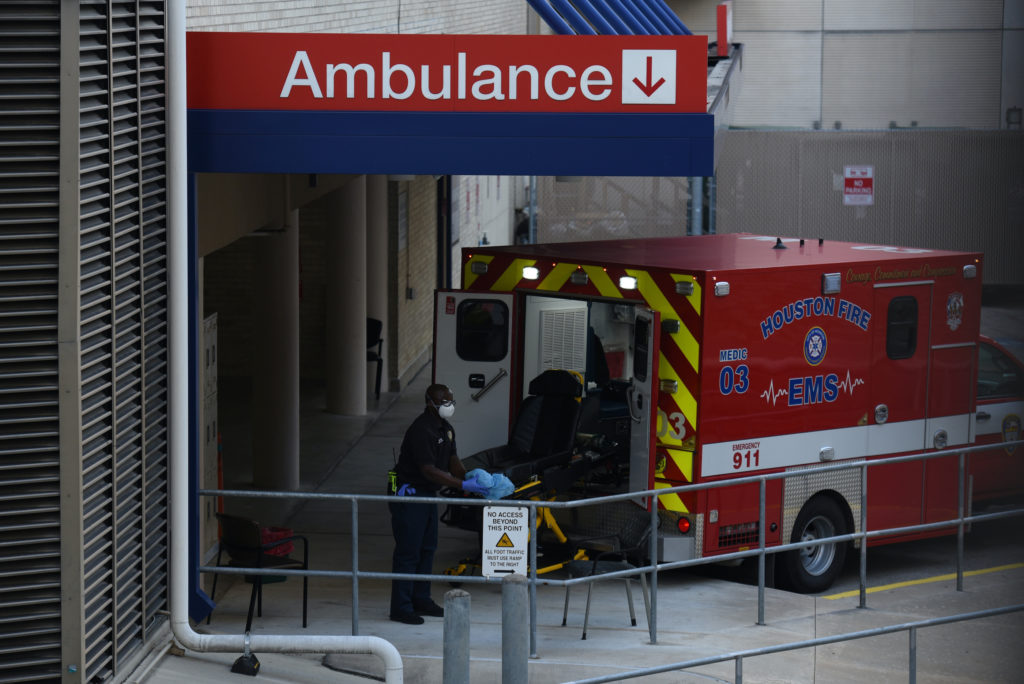 A healthcare worker places a stretcher inside of an ambulance at the emergency room entrance of Houston Methodist Hospital in the Texas Medical Center as cases of the coronavirus disease (COVID-19) spike in Houston, Texas, U.S., July 8, 2020. Photo by Callaghan O’Hare/ Reuters.

“It’s a false narrative to take comfort in a lower rate of death,” Dr. Anthony Fauci, director of the National Institute of Allergy and Infectious Diseases, said Tuesday. He advised Americans: “Don’t get yourself into false complacency.”

The new AP analysis of data from Johns Hopkins University shows the seven-day rolling average for daily reported deaths in the U.S. increased to 664 on Friday from 578 two weeks ago, as deaths rose in more than half the states. That’s still well below the lethal numbers of April.

“It’s consistently picking up,” said William Hanage, a Harvard University infectious diseases researcher. “And it’s picking up at the time you’d expect it to.”

THE FACTS: His notion that infections are high only because the U.S. diagnostic testing has increased is false. His own top public health officials have shot down this line of thinking. Infections are rising because people are infecting each other more than they were when most everyone was hunkered down.

It’s true that increased testing also contributes to the higher numbers. When you look harder, you’re going to see more. But the testing has uncovered a worrisome trend: The percentage of tests coming back positive for the virus is on the rise across nearly the entire country.

That’s a clear demonstration that sickness is spreading and that the U.S. testing system is falling short.

“A high rate of positive tests indicates a government is only testing the sickest patients who seek out medical attention and is not casting a wide enough net,” says the Johns Hopkins University Coronavirus Resource Center, a primary source of updated information on the pandemic.

Americans are being confronted with long lines at testing sites, often disqualified if they are not showing symptoms and, if tested, forced to wait many days for results.

TRUMP on the coronavirus: “We have the lowest Mortality Rate in the World.” – tweet Tuesday.

THE FACTS: This statement is wholly unsupported.

An accurate death rate is impossible to know. Every country tests and counts people differently, and some are unreliable in reporting cases. Without knowing the true number of people who become infected, it cannot be determined what portion of them die. 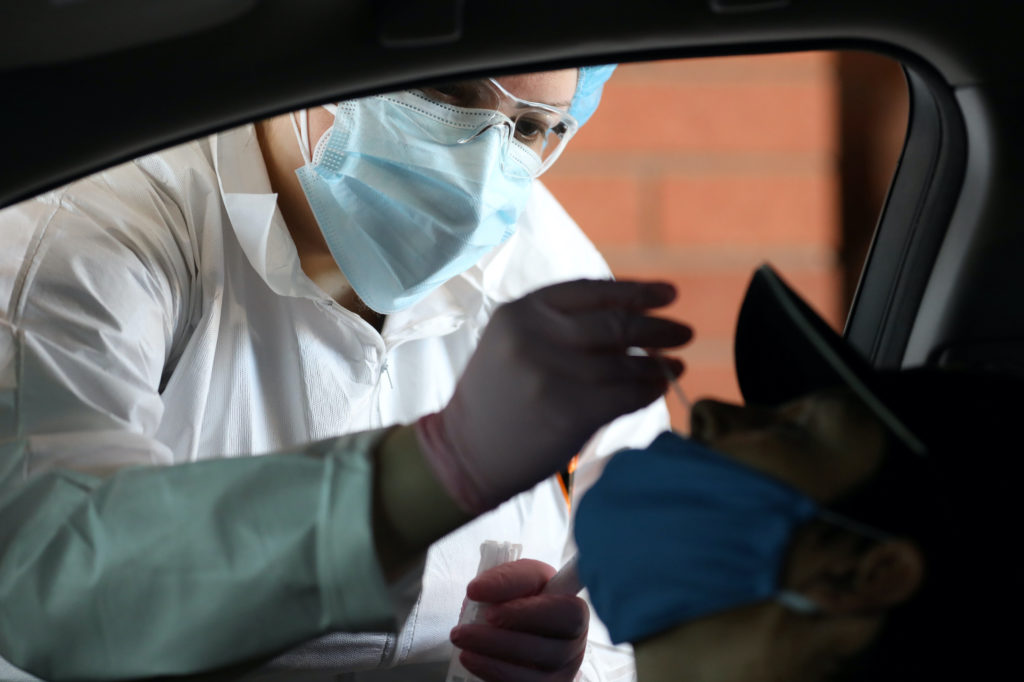 Using a count kept by Johns Hopkins University, you can compare the number of recorded deaths with the number of reported cases. That count shows the U.S. experiencing more deaths as a percentage of cases than most other countries now being hit hard with the pandemic. The statistics look better for the U.S. when the list is expanded to include European countries that were slammed early on by the virus but now appear to have it under control. Even then, the U.S. is not shown to be among the best in avoiding death.

Such calculations, though, do not provide a reliable measurement of actual death rates, because of the variations in testing and reporting, and the Johns Hopkins tally is not meant to be such a measure.

The only way to tell how many cases have gone uncounted, and therefore what percentage of infected people have died from the disease, is to do another kind of test comprehensively, of people’s blood, to find how many people bear immune system antibodies to the virus. Globally, that is only being done in select places.

THE FACTS: Yes, but only because it is following the greatest job losses in history, by far.

The U.S. economy shed more than 22 million jobs in March and April, wiping out nearly a decade of job growth in just two months, as the viral outbreak intensified and nearly all states shut down nonessential businesses. Since then, 7.5 million, or about one-third, of those jobs have been recovered as businesses reopened. Even after those gains, the unemployment rate is 11.1%, down from April and May but otherwise higher than at any point since the Depression. 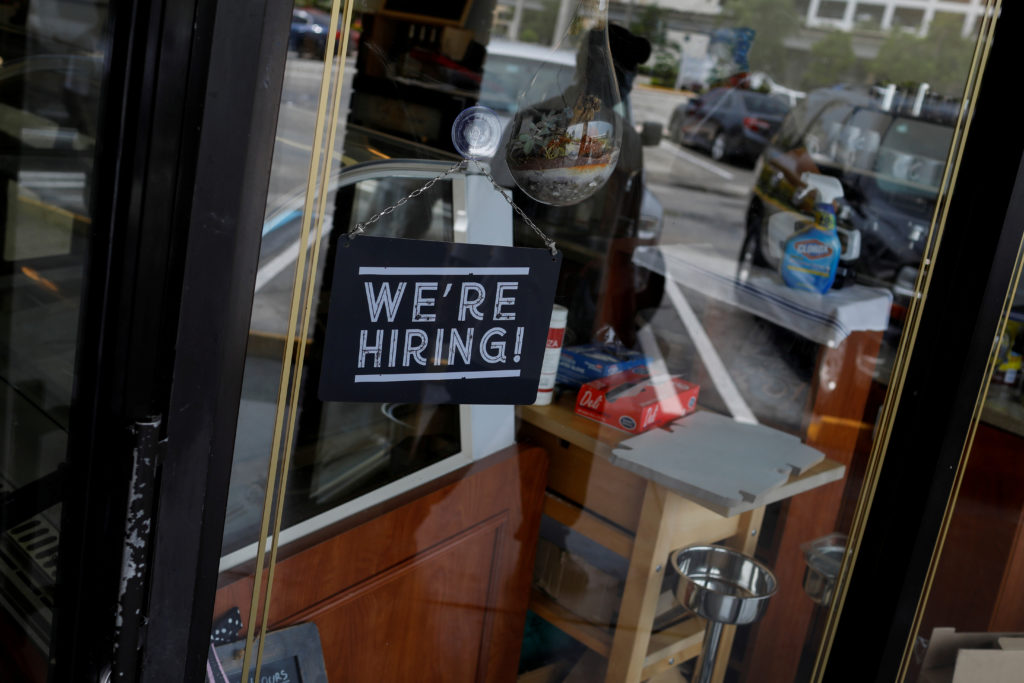 FILE PHOTO: A “We’re Hiring” sign advertising jobs is seen at the entrance of a restaurant, as Miami-Dade County eases some of the lockdown measures put in place during the coronavirus disease (COVID-19) outbreak, in Miami, Florida, U.S., May 18, 2020. Photo by Marco Bello, Reuters.

TRUMP: “Economy and Jobs are growing MUCH faster than anyone (except me!) expected.” — tweet Wednesday.

THE FACTS: Not really. It’s true that May’s gain of 2.7 million jobs was unexpected. Economists had forecast another month of job losses. But most economists projected hiring would sharply rebound by June or at the latest July, once businesses began to reopen. The gains kicked in a month earlier than forecast.

Now, though, coronavirus cases are rising in most states, imperiling the climb back. In six states representing one-third of the economy — Arizona, California, Colorado, Florida, Michigan, and Texas — governors are reversing their reopening plans, and the restart is on pause in 15 other states. Such reversals are keeping layoffs elevated and threatening to weaken hiring.

TRUMP campaign ad, playing out a scenario where a person needing help calls the police in a Biden presidency and gets a voice recording: “You have reached the 911 police emergency line. Due to defunding of the police department, we’re sorry but no one is here to take your call.” The ad closes with the message: “You won’t be safe in Joe Biden’s America.”

THE FACTS: Biden has not joined the call of protesters who demanded “defund the police” after Floyd’s killing. He’s proposed more money for police, conditioned to improvements in their practices.

“I don’t support defunding the police,“ Biden said last month in a CBS interview. But he said he would support tying federal aid to police based on whether “they meet certain basic standards of decency, honorableness and, in fact, are able to demonstrate they can protect the community, everybody in the community.”

Biden’s criminal justice agenda, released long before he became the Democrats’ presumptive presidential nominee, proposes more federal money for “training that is needed to avert tragic, unjustifiable deaths” and hiring more officers to ensure that departments are racially and ethnically reflective of the populations they serve.

That adds up to more money for police, not defunding law enforcement. 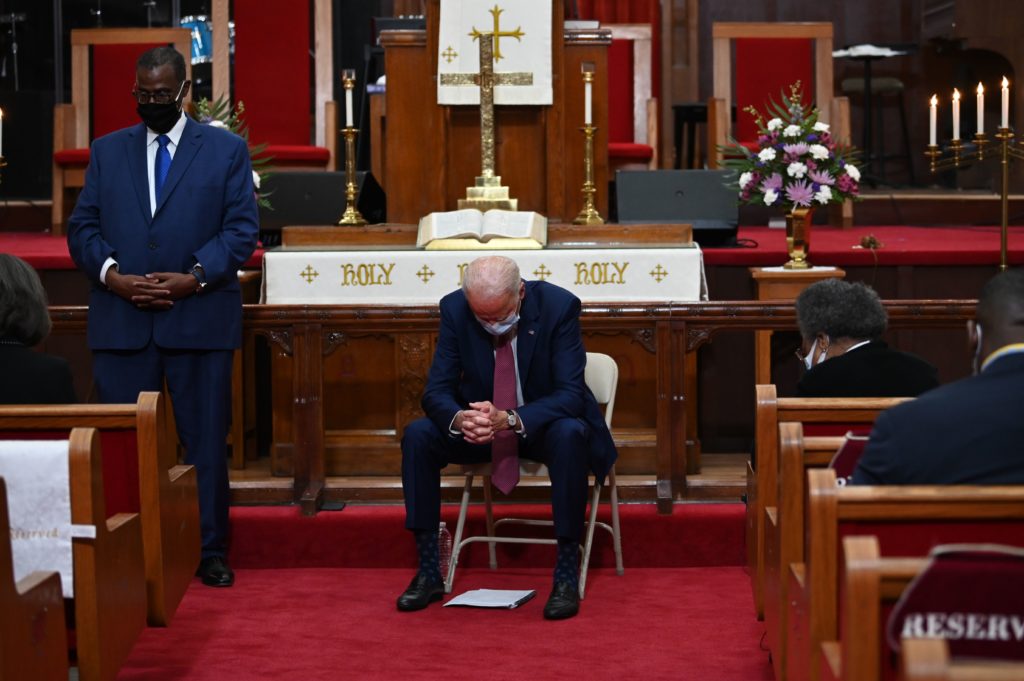 Former vice president and Democratic presidential candidate Joe Biden(C) prays as he meets religious leaders at Bethel AME Church in Wilmington, Delaware on June 1, 2020. – Democratic presidential candidate Joe Biden visited the scene of an anti-racism protest in the state of Delaware on May 31, 2020, saying that the United States was “in pain”. “We are a nation in pain right now, but we must not allow this pain to destroy us,” Biden wrote in Twitter, posting a picture of him speaking with a black family at the cordoned-off site where a protesters had gathered on Saturday night. Photo by Jim Watson, AFP.

Democrats, meanwhile, have pointed to Trump’s repeated proposals in the administration’s budget to cut community policing and mediation programs at the Justice Department. Congressional Republicans say the program can be effectively merged with other divisions, but Democrats have repeatedly blocked the effort. The program has been used to help provide federal oversight of local police departments.

Despite proposed cuts, Attorney General William Barr last month said that the department would use the COPS program funding to hire over 2,700 police officers at nearly 600 departments across the country.

THE FACTS: That’s misleading, a selective use of Biden’s words on the subject.

The email links to an excerpted video clip of Biden’s conversation with liberal activist Ady Barkan, who endorsed Biden on Wednesday after supporting Elizabeth Warren and Bernie Sanders during the Democratic primaries. A full recording of that conversation, provided by the Biden campaign to The Associated Press, shows he again declined to support defunding police,

Barkan raises the issue of police reform and asks whether Biden would funnel money into social services, mental health counseling and affordable housing to help reduce civilian interactions with police.

Biden responds that he is calling for increased funding for mental health providers but “that’s not the same as getting rid of or defunding all the police” and that both approaches are needed, including more money for community police.

Asked again by Barkan, “so we agree that we can redirect some of the funding,” Biden then answers “absolutely yes.”

Biden then gives the caveat that he means “not just redirect” federal money potentially but “condition” it on police improvements.

BIDEN: “President Trump claimed to the American people that he was a wartime leader, but instead of taking responsibility, Trump has waved a white flag, revealing that he ordered the slowing of testing and having his administration tell Americans that they simply need to ‘live with it.’’ – statement Wednesday marking the rise in U.S. coronavirus infections to more than 3 million.

THE FACTS: To be clear, the government did not slow testing on the orders of the president.

Trump at first denied he was joking when he told a Tulsa, Oklahoma, rally on June 20 that he said “to my people, ‘Slow the testing down, please'” because “they test and they test.” Days later he said he didn’t really mean it.

In any event, a succession of his public-health officials testified to Congress that the president never asked them to slow testing and that they were doing all they could to increase it. But testing remains markedly insufficient.