At Women’s Marches, a spotlight on missing and murdered Indigenous women

PHOENIX — In a sea of pink “pussyhats” worn at Women’s March events nationwide, it was the color red that stood out most for Native Americans and their allies this weekend. In cities across the country, families and friends marked the occasion by spotlighting the scores of missing and murdered Indigenous women, girls, and transgender people — cases that, for decades, have mostly gone unsolved.

“My heart is heavy today,” said Sarafina Joe, a tribal citizen of the Navajo Nation. “I had no idea there were so many victims.”

In Phoenix, Arizona, Joe marched among tall red banners marked with the name of her sister Nicole. She died in a domestic violence dispute on Christmas Day, and so far, her accused killer has not been charged with murder, but a lesser crime: aggravated assault.

“It angers me,” Joe said, as she described her sister’s struggle with alcohol addiction. “We live in a border town and a large part of alcoholism is in that city,” she said, referring to the nearby community of Flagstaff, Arizona. “There’s lot of stereotyping there.”

A steady drumbeat kept pace against a backdrop of anti-Trump chants. But for Joe, her cause for marching on this morning gripped at an issue that goes generations deep. A pattern of Indigenous women and girls disappearing, often without resolution, has been happening for decades.

“I have no faith in the justice system, but justice is what needs to be served,” said Joe. 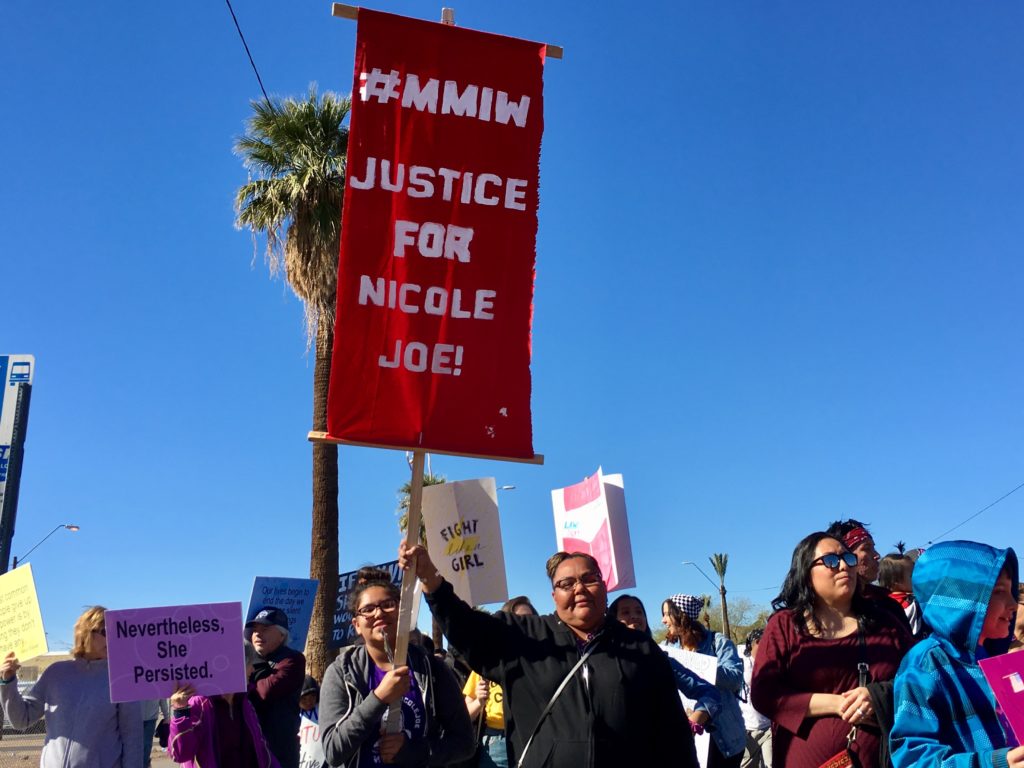 At a Women’s March in Phoenix, AZ, Sarafina Joe, right, and her niece, Kyra Joe, left, wave a sign in honor of their relative, Nicole, who was killed on Christmas Day in a domestic violence dispute. Nicole was Sarafina’s sister and Kyra’s mother. Photo by Jenni Monet

The death of Nicole Joe is the latest in a series of cases that have been unevenly addressed by the criminal justice system in America. The statistics are stark: 4 out of 5 Native American women are expected to encounter violence in their lifetime; more than half will be victimized by domestic violence or sexual assault; and murder rates against Native American women exceed ten times the national average in some tribal and urban communities.

Perhaps the most alarming data come from the Center for Disease Control and Prevention, which claimed in 2016 that the third-leading cause of death for Native American and Alaska Native females, aged 10-24, is murder.

While it’s unclear just how many women, girls, and transgendered victims exist (the National Crime Information Database reports there were 5,712 known incidents of missing and murdered Indigenous women as of 2016), there’s a unifying sense that these are cases that have simply fallen through the cracks. Data is disparate and policing is poor.

In San Francisco, Pennie Opal Plant, an organizer with the Indigenous rights group Idle No More, asked a crowd, “Is this okay?”

“No!” shouted the spirited bunch.

Further north, in Seattle, the push for greater awareness was perhaps most amplified. There, Indigenous Peoples led the entire demonstration, beginning with opening prayers by Duwamish spiritual descendants of Chief Seattle. Dave Hoyapatubbi, a city resident, was among the group. A citizen of the Choctaw Nation in Oklahoma, he told a reporter with the Seattle Times that his purpose for marching was to get others to pay attention.

“I’m here as a Native person honoring Native women,” said Hoyaptubbi. “It’s kind of like no one sticks up for them.”

Dave Hoyopatubbi, 61, of Seattle, a member of the Choctaw Tribe, is here too honor murdered and missing indigenous women.
"I'm here as a native person honoring native women. It's kind of like no one sticks up for them." pic.twitter.com/zKoAKdNpzA

According to a recent poll, results suggest that when it comes to reporting relevant crimes, 36 percent of Native Americans living in majority Native areas say they avoid calling the police because of fear of discrimination. Fifty percent of those polled said they felt like Serafina Joe — treated unfairly by the courts.

“Aggravated assault is not enough for us,” said Joe, regarding the lesser charge handed down to her sister’s accused killer. “The public prosecutors say they are going to help us, but with the charges being dropped, I have feelings otherwise.”

As she marched next to her 12-year-old niece — a daughter who is now without a mother — Joe said she she would litigate, if only she had the money to hire attorneys.

“She was my best friend, someone I clung on to as much as I could,” said Joe of her “stolen sister,” a term of endearment for many families and friends who have lost an Indigenous loved one to violence.

“I now understand what that term means,” she said, walking strong in the morning light and fighting off tears.

Left: A red banner is waved in Phoenix, Arizona, Sunday, in honor of Navajo mother Nicole Joe, who died on Christmas Day in a domestic violence dispute in Flagstaff, Arizona. Photo by Jenni Monet