Saturday marked the last funeral for victims of a racist attack on Black people at a Buffalo supermarket, with a service that became a call to action and an emotional plea to end the hate and violence that has wracked the nation.

The funeral for 86-year-old Ruth Whitfield — the oldest of the 10 Black people who were killed — included a speech by Vice President Kamala Harris, who attended the service at Mount Olive Baptist Church in Buffalo, New York. She addressed mourners at the insistence of Rev. Al Sharpton, and said this is a moment in time for “all good people” to stand up to the injustice that happened at the Tops Friendly Market on May 14, as well as the Robb Elementary School in Uvalde, Texas, and other mass shootings.

“We will not allow small people to create fear in our community,” she said. “We will not be afraid to stand up for what’s right, to speak truth even when it may be difficult to hear and speak.”

Civil rights attorney Ben Crump, who delivered a fiery tribute to Whitfield at the beginning of the funeral service, called for all “accomplices” who aided and abetted “this monster” who opened fire in the supermarket to be held accountable, from the gun manufacturers and distributors to the parents of the suspect. 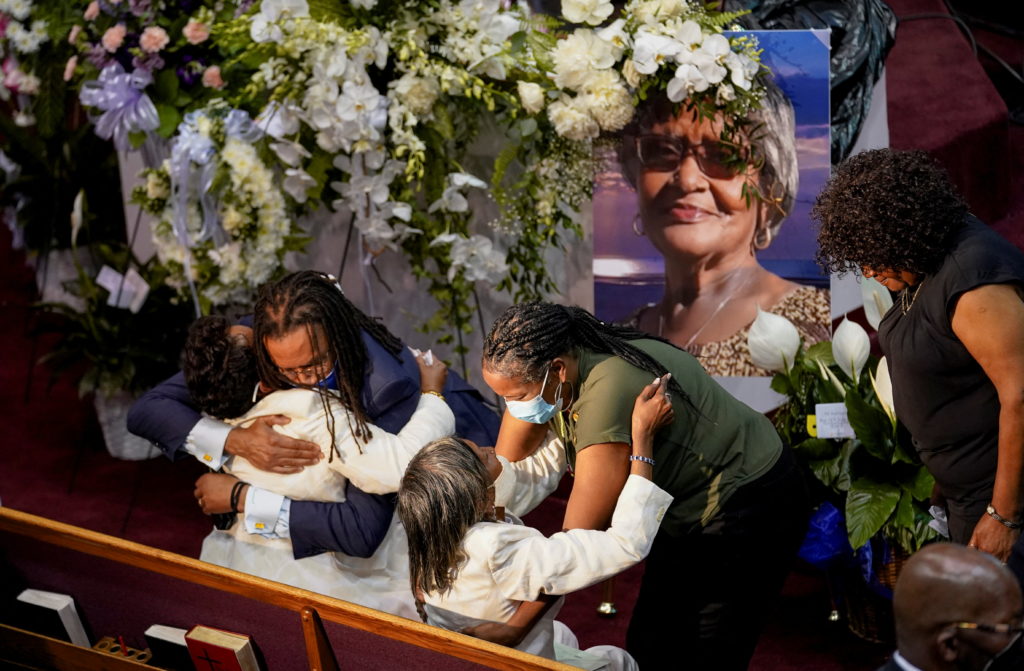 Angela Crawley and Robin Harris are embraced next to a portrait of their mother, Ruth Whitfield, an 86-year-old victim of the recent mass shooting in Buffalo, as they attend the funeral service for her at Mount Olive Baptist Church in Buffalo, New York, U.S., May 28, 2022. Photo by /Kevin Lamarque

Crump said those those who “instructed and radicalized this young, insecure individual” should also be held to account for taking Whitfield from her family, the Buffalo community and the planet. He called her “one of the most angelic figures that we have ever known.”

“It is a sin that this young depraved man, not a boy, went and killed Ruth Whitfield and the ‘Buffalo 10,’” Crump said, referring to the victims.

Whitfield had been inside the supermarket after visiting her husband of 68 years in a nursing home when a gunman identified by police as 18-year-old Payton Gendron began the deadly onslaught.

Authorities said Gendron, who is white, targeted the store three hours from his home in Conklin because it is in a predominantly Black neighborhood.

In all, 13 people were shot in the attack which federal authorities are investigating as a hate crime. Three people survived.

Gendron is charged with first-degree murder and is being held without bail. His attorney has entered a plea of not guilty on his behalf.

Harris and second gentleman Doug Emhoff visited a memorial outside the Tops Friendly Market after the funeral. The vice president laid flowers, and the pair paused to pray for several minutes.

Left: U.S. Vice President Kamala Harris lays flowers at a memorial at the scene of a mass shooting at a Tops supermarket, next to her husband Douglas Emhoff, following the memorial service for Ruth Whitfield, an 86-year-old victim of the shooting, in Buffalo, New York, U.S., May 28, 2022. Photo by Kevin Lamarque/Reuters.