A quick guide to Election Day

After months of primary and general election campaigning, the 2018 midterm elections are here. Voters in many early-voting states have already cast their ballots, but millions of others will head to the polls Tuesday. The results on Election Day will be a referendum on President Donald Trump and the Republican-controlled Congress. The election is also a test for Democrats, who are under pressure to make big gains in the House and defend seats in the Senate.

Here is a guide of key issues and races to watch in the final hours of the election.

The first races to watch

As the night begins, turn your eyes to a handful of critical Eastern time zone contests.

6 p.m. ET: Look to Kentucky, where its 6th Congressional District will be the first competitive House race in the nation to close polls. Republican Rep. Andy Barr is facing Democratic challenger Amy McGrath, whose ad depicting her past life as a fighter pilot went viral. Senate Republican Leader Mitch McConnell, also of Kentucky, is also personally watching this race. The outcome may indicate how the slew of veterans running as Democrats can do in moderate-to-conservative districts.

7 p.m. ET: Watch Georgia, Indiana and Virginia. Home in on the Georgia governor’s race, which pits progressive Democrat Stacey Abrams against staunchly conservative Republican Secretary of State Brian Kemp. At the same time, we should be getting a good idea about the Indiana U.S. Senate race. Sen. Joe Donnelly is one of 10 Democratic senators across the country who are running for re-election in states that voted for Trump. Thanks to a time zone split in the Hoosier State, some counties could report results before 7 p.m. ET. Finally, pay attention to Virginia, where Democrats hope to flip two to three Republican House seats. In particular, outside of Richmond, Freedom Caucus member Rep. Dave Brat faces a formidable challenge from former CIA operative Abigail Spanberger. 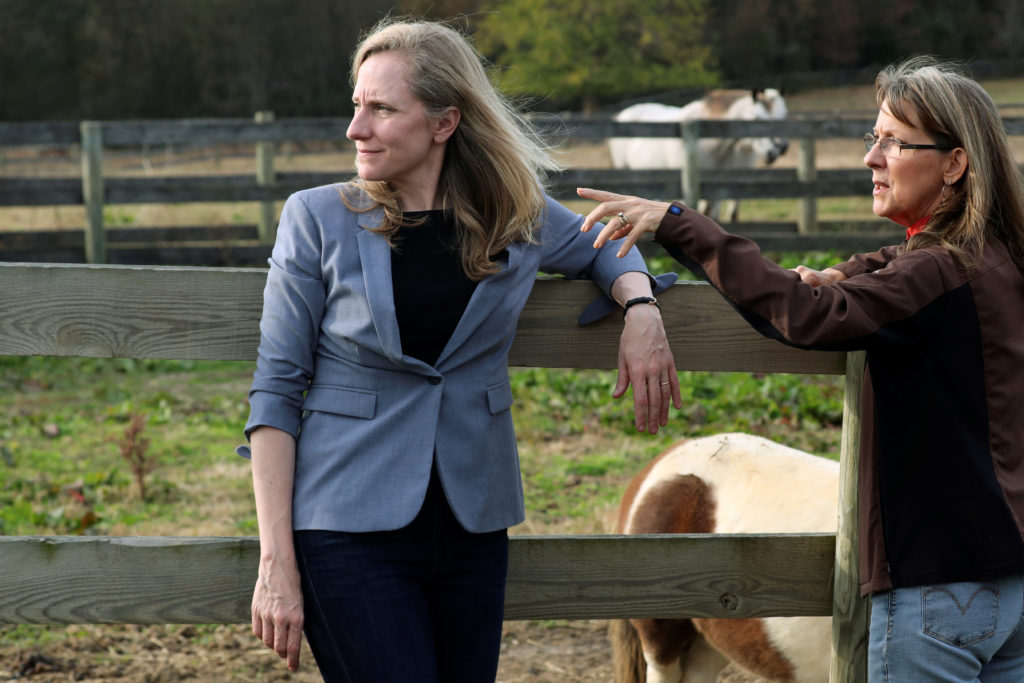 Abigail Spanberger, left, a Democratic House candidate in Virginia, visiting a horse rescue facility in Burkeville, Virginia, on October 31, 2018. Spanberger is competing for votes in the district’s suburbs and right-leaning rural areas. Photo by REUTERS/Jonathan Ernst

The early-to-close House races in Kentucky and Virginia are important for another reason. McGrath and Spanberger are part of a wave of first-time female candidates running in 2018. Most (though not all) of them are Democrats, and many — like McGrath and Spanberger — have military or national security or intelligence experience, a break from past elections when candidates with military backgrounds were more likely to be Republican (and male). Additionally, McGrath, Spanberger, and many other first-time female candidates are running in moderate House districts with large numbers of suburban and female voters, voting blocs that both parties are hoping will break in their favor.

READ MORE: This ex-CIA officer is making her first run for Congress. Can she push out a tea party star?

These political newcomers were motivated to run this year for a variety of reasons. Some were spurred to action by Trump’s victory in the 2016 election, participated in the Women’s March in Washington or joined local liberal groups and eventually decided to run for office. Others ran on issues like health care, vowing to protect the Affordable Care Act.

Whatever these candidates’ motivations, the trend could be one of the biggest storylines of the night. If early turnout is up for female Democratic candidates in places like Kentucky and Virginia, it could signal a wave of victories across the country and a big night for Democrats. If candidates like McGrath and Spanberger come up short, it could be a sign that Republicans held onto enough suburban and female voters in key swing districts to avoid major losses in the House.

Democrats have long relied on support from minority voters, young voters, women and college-educated liberals. This group came to be known as the Obama coalition after it helped the party win two straight presidential elections. Florida Democratic gubernatorial nominee Andrew Gillum and other liberal candidates are using the same playbook this year, while also trying to win over some of the largely white, middle class moderate and independent voters who backed Trump in 2016.

The question is, will it work? Relying on young voters in particular is a risk, given that the group turns out a lower rate than the rest of the electorate in midterms and general elections. In 2014, for example, just 16 percent of people aged 18 to 29 voted, according to an analysis by the Washington Post. In contrast, 43 percent of people aged 45 to 59 voted, and the turnout was even higher for people over 60 years old.

Despite the potential risks, Democrats didn’t have much of a choice in adopting this strategy — especially in an election year dominated by discussions about race, gender and immigration. Much of the activism and enthusiasm on the left has been driven by youth and minority voters and liberal groups, which collectively make up the party’s progressive base. Now Democrats need them to vote. The exit polls will tell the story. Until they come out, watch for stories about turnout in majority-minority districts, as well as in places where young voters have been active this cycle, like the region around Parkland, Florida, where students have pushed for gun control reform after a school shooting in February. 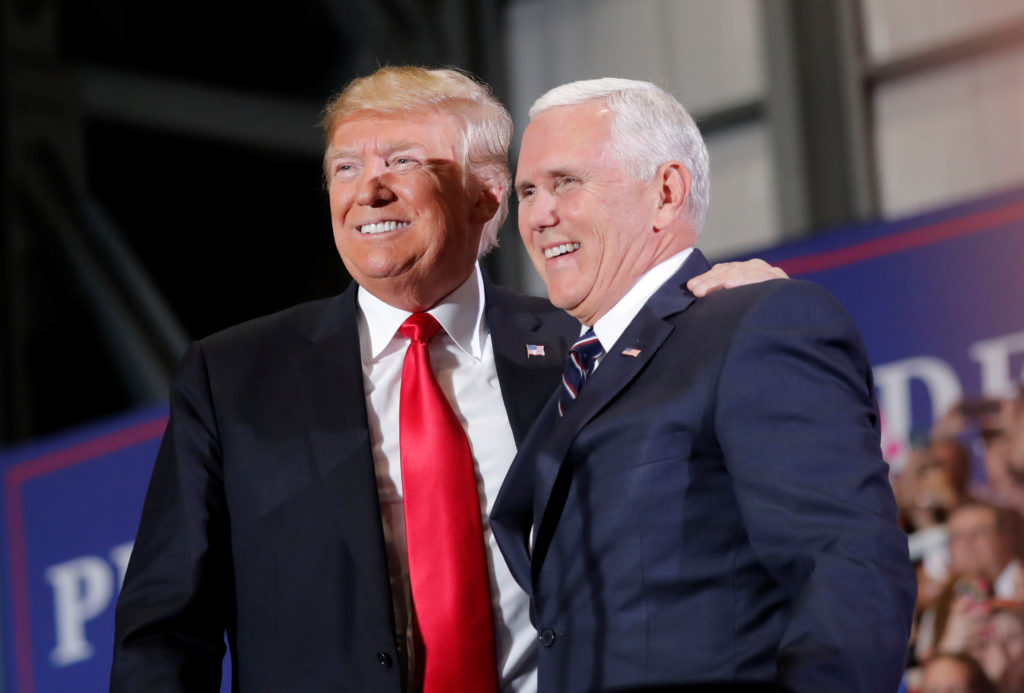 In the final week of campaigning, Trump has stumped as if he were personally on the ballot, with 11 rallies in just six days.

READ MORE: When Trump says ‘fake news,’ this is what supporters say they hear

As results come in, watch to see if his efforts to turn out the Trump base worked. His primary focus: U.S. Senate races. In the past two weeks, the president has stumped for Senate candidates in Indiana three times and made appearances in both Florida and Missouri twice.He has also rallied for Senate candidates in Montana, Ohio, Tennessee, Texas, West Virginia and Wisconsin. What else do those states have in common? Trump carried all of them in 2016. Senate Republicans, who have a two-seat margin going into this election, are counting on his 2016 voters to help them maintain their control of the Senate in 2018.

With record turnout expected in many states, and tense debates over alleged voter suppression and voter fraud underway, it is worth closely watching potential problems that arise at polling stations.

One place for keeping track of issues as they arise is ProPublica’s Electionland project.

How will the president and his allies spin it?

Trump is known for his focus on winning, rarely acknowledging personal mistakes or defeat. If Republicans lose control of either chamber of Congress, watch for how the White House and its allies characterize that loss, as well as who they blame. Conversely, if Republicans keep control of both the House and Senate, pay attention to where the Trump White House gives credit. This is a president in the midst of a re-election campaign, and his administration’s words about what happens today may indicate how they direct some of their messaging for 2020.

READ MORE: This Florida county went big for Trump. Will it help the GOP win 2018?

How will Democrats spin it? 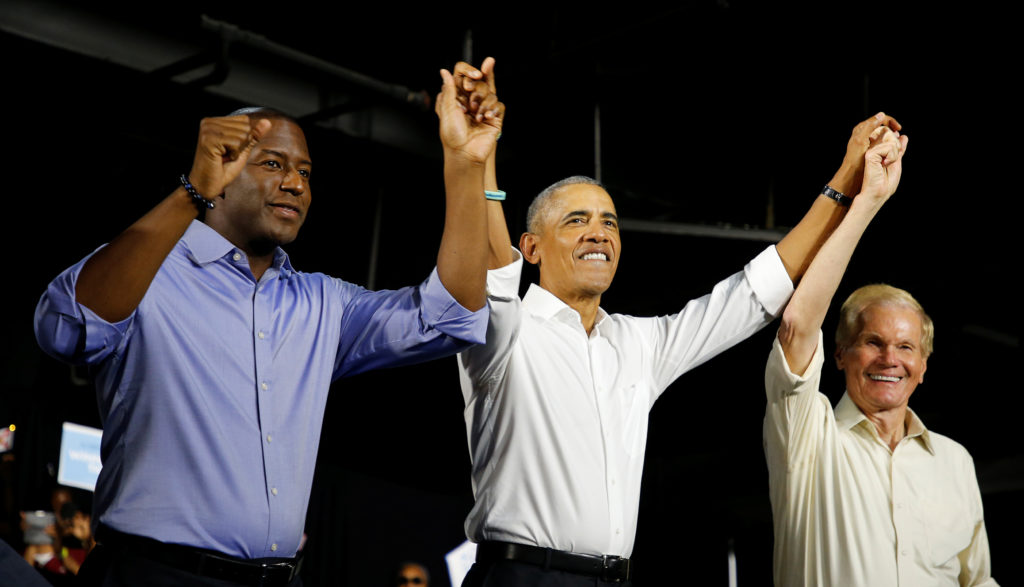 Just like Trump and Republicans, Democrats will seek to spin the results to their advantage regardless of the outcome. If they take back the House and do well in the Senate, Democrats will argue the midterms were a rejection of Trump and his policies. Democrats in that scenario would also offer their gains in the midterms as proof that the party is well-positioned to beat Trump in 2020.

Democrats would have a harder time claiming victory if they fail to win control of the House and lose more seats in the Senate. But that doesn’t mean they wouldn’t try. In that case, they’d focus on close races they lost, but where turnout was higher than it was in 2014. Democrats would argue those races show energy on the left is still building ahead of the next presidential election, just not as quickly as the party had hoped.