As Mueller steps aside, Democrats face pressure to tackle impeachment head on

Robert Mueller’s parting words as special counsel Wednesday marked a new phase in the political battle over his investigation, increasing pressure on House Democrats to decide whether to move forward with an impeachment inquiry against President Donald Trump.

Mueller announced he was shutting down his office and formally resigning Wednesday, in his first public remarks regarding his probe into Russian interference in the 2016 election and possible ties to Trump’s campaign. Reading from prepared remarks, Mueller said his conclusions in the report spoke for themselves, and he did not plan to testify before Congress on his findings.

He reiterated that his investigation showed multiple, systemic efforts to interfere in the 2016 election, but that he did not reach a determination on whether the president obstructed justice.

Mueller said he followed Justice Department legal memos that hold a sitting president can’t be indicted. Because of that, Mueller said, charging Trump with a crime was not an option. But Mueller noted that he was unable to say that Trump had not committed a crime, based on the evidence.

“The Constitution requires a process other than the criminal justice system to formally accuse a sitting president of wrongdoing,” Mueller said. He included a similar line in the report, which was widely interpreted as leaving the door open for Congress to launch impeachment proceedings.

Taken together, Mueller’s comments placed the onus on House Democrats to decide what to do next. With Mueller officially out of the picture, the party will have to confront the question many have been asking for months: to impeach, or not to impeach?

What Democrats are saying now

In a statement responding to Mueller’s remarks, House Judiciary Chairman Jerrold Nadler, D-N.Y., said the special counsel’s work left no doubt that Trump “sought to obstruct Mueller’s investigation over and over again.”

Later Wednesday, when asked whether he would pursue impeachment, Nadler said “at this point all options are on the table and nothing should be ruled out.” 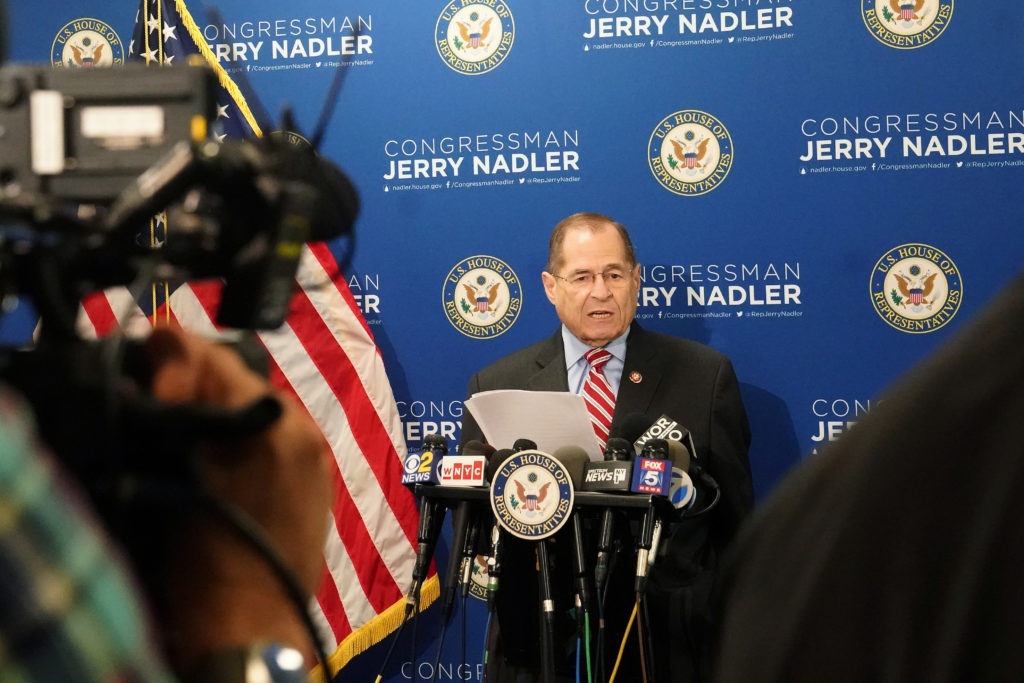 Congressman Jerry Nadler (D-NY) speaks to the media in the Manhattan borough of New York, New York, after Mueller made a statement about the Russia investigation on May 29, 2019. Photo by Carlo Allegri/Reuters

House Speaker Nancy Pelosi echoed Nadler in her own statement, but she did not offer any indication she was ready to take the irreversible step of pursuing impeachment, nor that she was ready to change her position that Democrats should continue investigating Trump.

“The Congress holds sacred its constitutional responsibility to investigate and hold the President accountable for his abuse of power. The Congress will continue to investigate and legislate to protect our elections and secure our democracy. The American people must have the truth,” Pelosi said in her statement.

While Mueller’s investigation was still in progress, Pelosi’s wait-and-see approach largely worked in keeping most House Democrats from calling for an impeachment inquiry.

But now, as the focus shifts away from the special counsel, Democrats will have to evaluate that strategy as they jockey with the White House to shape public opinion about Trump’s actions in office. And it’s unclear if a majority of Democrats will continue to follow Pelosi’s lead.

There were some signs Wednesday that more Democrats might start jumping on the impeachment bandwagon. 2020 presidential candidate Sen. Cory Booker, D-N.J., who had previously said he was reserving judgment until Mueller’s work was done, issued a statement Wednesday saying it was time for House Democrats to act.

“We have one remaining path to ensure justice is served. It is our legal and moral obligation to hold those who have committed crimes accountable. It’s clear that the House must begin impeachment proceedings,” Booker said.

Sen. Kirsten Gillibrand, D-N.Y., another 2020 presidential candidate who had not yet called for impeachment proceedings, also issued a statement Wednesday changing her position. “It’s time for Republicans and Democrats to begin impeachment hearings and follow the facts wherever they may lead,” Gillibrand said.

Sen. Elizabeth Warren, D-Mass., Sen. Kamala Harris, D-Calif., and Rep. Seth Moulton, D-Mass., among other 2020 Democrats, joined Booker and Gillibrand in calling for the House to begin or take steps towards impeachment.

Democrats will likely be following public opinion as they weigh their responses. Polls have consistently shown that Americans feel “the president lies more than previous presidents, they feel he’s lied to the American people, and he stood in the way of the investigation,” said Margie Omero, a Democratic pollster.

Earlier this month, 53 percent of Americans in a PBS NewsHour, NPR and Marist poll said Mueller’s report should not lead to impeachment hearings against Trump. However, 70 percent of Democrats did support impeachment.

But Omero said Democratic lawmakers would draw their own conclusions, and might not all agree on the right approach. “There is no one size fits all when it comes to this kind of thing,” she said.

The looming 2020 election has placed Democrats in a difficult position, exposing a divide within the party on how to handle the impeachment question. It has also created an opening for Trump and his allies to portray support for impeachment as a politically motivated effort by Democrats to drive the president from office.

Trump and his allies wasted no time Wednesday touting Mueller’s remarks as further proof that the president had done nothing wrong.

“Nothing changes from the Mueller Report. There was insufficient evidence and therefore, in our Country, a person is innocent. The case is closed! Thank you,” Trump wrote on Twitter. 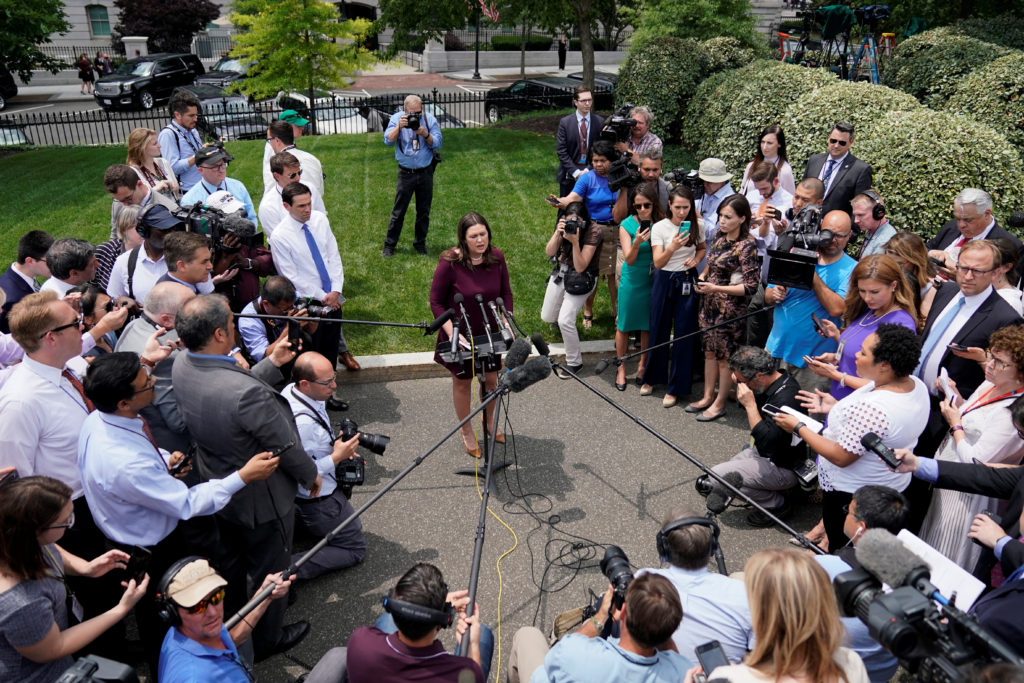 White House Press Secretary Sarah Sanders speaks on Special Counsel Robert Mueller’s statement about his report into Russia’s role in the 2016 U.S. election and any potential wrong doing by President Donald Trump at the White House in Washington, on May 29, 2019. Photo by Joshua Roberts/Reuters

“President Trump has been fully and completely exonerated. Mueller said his investigation is over. The case is closed,” Brad Parscale said in a statement.

Mueller has been widely praised for stepping into a political minefield and conducting a thorough, professional investigation that abided by strict Department of Justice rules.

Those rules — namely the legal opinion that a sitting president cannot be indicted — have sparked some of the biggest debates about how Mueller carried out the probe.

“He is a career DOJ chief. He is going to follow their rules whether he thinks they are right or not,” said Michael Conway, the former legal counsel for the House Judiciary Committee during the impeachment inquiry into President Richard Nixon.

Mueller stayed out of the public eye while serving as special counsel and during his rare public statement Wednesday he said he does not plan to provide any testimony beyond his report — a choice he said he made on his own. That attempt to remain outside of the political fray, which earned him praise in the past, is now earning him criticism.

Mueller “expressed himself carefully and precisely, but I do have a problem with him saying, ‘If you don’t get it, you’re out of luck,’” said Philip Bobbitt, former associate counsel to President Jimmy Carter.

Others pointed to the thoroughness of Mueller’s 440-page report and argued that speaking further would only add fuel to the political fire.

“The congressional search for truth is a lot of posing and soundbites without caring about the underlying merits of the investigation,” said Jim Trusty, a former Justice Department prosecutor.

Congress could still ask Mueller to appear on Capitol Hill. Nadler sidestepped the question Wednesday, but in a statement House Intelligence Committee Chairman Adam Schiff left open the possibility, saying “we look forward to Mueller’s testimony before Congress.” Given that he is no longer a Justice Department employee, Mueller is free to testify, although it is unclear whether the White House would still try to block his testimony.

Earlier this month, the White House directed former White House counsel Don McGahn to defy a subpoena from the House Judiciary Committee and made the argument that he was not legally compelled to testify.

Democrats will have to decide whether they think Mueller will provide valuable, new information or whether they already have enough evidence to begin impeachment proceedings.

But focusing on whether or not Mueller will testify at some future date misses the larger point he made in the report and again Wednesday, said Mike Murphy, a Republican strategist.

“I think what Mueller did today was preempt any testimony by saying, if he thought Trump was innocent, he would have put it in the report,” Murphy said. “If you step away from the theatrics of will he testify or not, that’s a pretty big statement and that’s bad news for the president.”

Between Mueller’s statement, his report and the witness testimony already presented to Congress, Conway said Democrats have more detailed evidence than lawmakers did when they initiated impeachment hearings against President Richard Nixon.

In Nixon’s case, lawmakers used the evidence to convince the American public that Nixon was unfit for office. It is far from clear whether today’s Democrats can do the same against Trump.

Left: Special counsel Robert Mueller departs after delivering a statement on his investigation into Russian interference in the 2016 U.S. presidential election at the Justice Department in Washington, on May 29, 2019. Photo by Jim Bourg/Reuters