More than half of Americans disapprove of Biden right now

This week may be remembered as the moment President Joe Biden’s honeymoon phase ended. For the first time since he took office in January, more than half of Americans disapprove of the job Biden is doing as president, including 41 percent who strongly disapprove, according to a new PBS NewsHour/NPR/Marist poll.

His job approval is now just 43 percent, a 6-point drop from two months ago and his lowest level of support so far, while the number who strongly disapprove has jumped 11 points since late June and 17 points since the start of his presidency.

Biden won the White House touting a core campaign message of experience, empathy and an ability to restore a sense of normalcy to Washington. “I know how to make government work,” Biden said to applause when he launched his presidential campaign in Philadelphia in May of 2019.

The number who strongly disapprove has jumped 11 points since late June and 17 points since the start of his presidency.

But a confluence of events in recent weeks — from the messy withdrawal from Afghanistan to surging COVID-19 cases at home — has soured many Americans on the president’s leadership.

In a speech marking the end of the U.S. mission in Afghanistan on Tuesday, Biden called the evacuation of more than 120,000 people an “extraordinary success” and rejected the criticism that the final weeks could have been handled in a “more orderly manner.”

Less than one-third of Americans agree with the president’s assessment, according to the poll, which was conducted from Aug. 26, when suicide bombings at the Kabul airport killed 169 Afghans and 13 U.S service members, through Aug. 31, the date Biden had set as the official end to the 20-year mission. Sixty-one percent of Americans, including one-third of those who voted for Biden in the 2020 election, disapprove of his handling of the withdrawal from Afghanistan.

That morass likely has contributed to a 9-point drop in Biden’s approval rating on foreign policy since the end of June (the results of that poll were published in July). For voters last year, Biden’s knowledge of foreign policy, including years serving on the Senate Foreign Relations Committee, and personal relationships with world leaders was another selling point. But in this poll, just 38 percent of Americans approve of his handling of foreign policy; 56 percent disapprove, a 12-point increase since June. The number of Americans who disapprove of Biden on that topic now rivals his predecessor, former President Donald Trump, during his second month in office.

The president is feeling the pinch on domestic policy, too. Amid concerns of high inflation and the pandemic recovery, Americans are evenly split on Biden’s handling of the economy. Forty-eight percent of Americans approve; 48 percent disapprove. The number who disapprove has reached the highest level of his presidency, up from 41 percent in March.

Perhaps the brightest spot for the Biden administration in this poll is the president’s handling of the coronavirus pandemic. Fifty-five percent of Americans approve of Biden’s response to COVID-19; another 41 percent disapprove. But even on this issue, which has been the most pressing domestic crisis for the administration, the president’s approval has dropped 9 points since June, amid concerns about the delta variant fueling rising COVID infections as students return to classrooms. 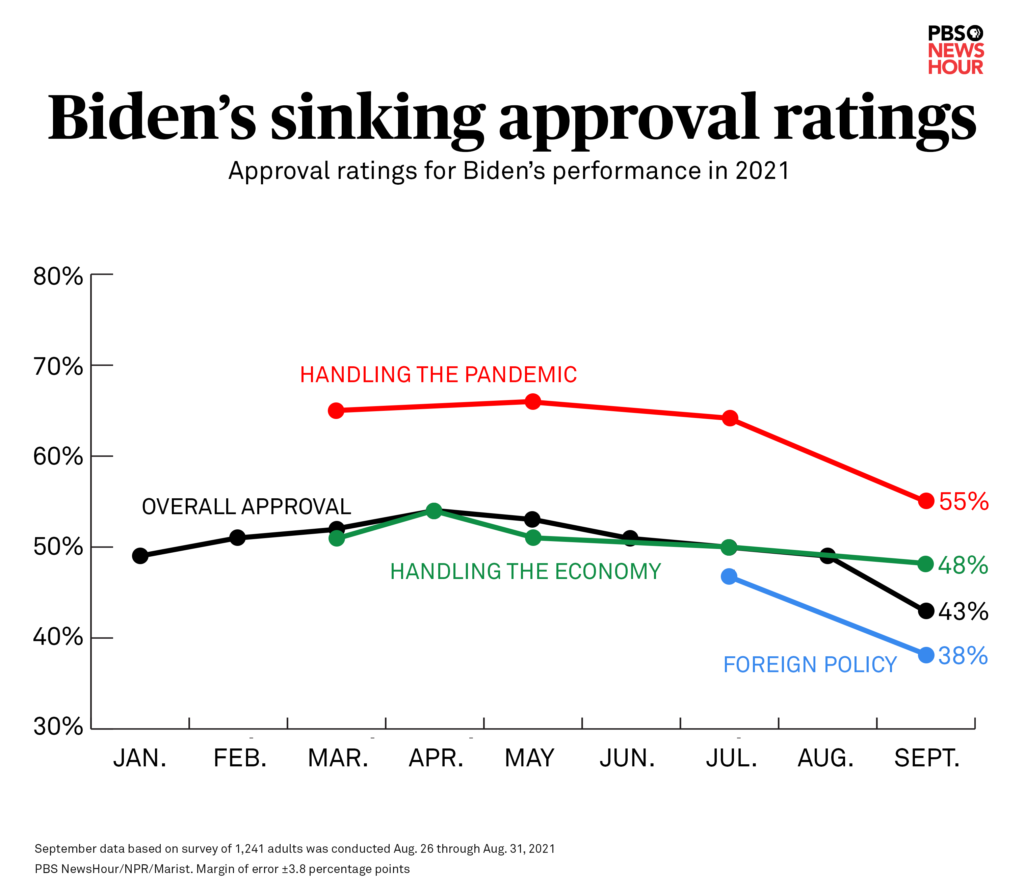 The president’s approval rating is about a lot more than his own ego — or, three years from now, his chances of reelection. It can also diminish the power of the bully pulpit.

“A popular president has a tremendous amount of power, both within his own party and to instill fear in the other party,” said Amy Walter, editor-in-chief of The Cook Political Report with Amy Walter. “An unpopular president is pretty hobbled among both groups.”

That’s potentially troubling for the White House as Congress is set to return from its summer recess later this month. Lawmakers have a long agenda of the president’s priority items to consider, including infrastructure, climate change mitigation, health care and education, among others.

The $3.5 trillion price tag on a budget resolution to tackle some of those issues has already raised alarm bells among some of the more centrist members of the president’s own party. West Virginia Sen. Joe Manchin called for a “strategic pause” on the budget bill in an op-ed in The Wall Street Journal on Thursday. “I can’t explain why my Democratic colleagues are rushing to spend $3.5 trillion,” Manchin wrote.

Biden’s sagging approval numbers could provide an opportunity for Democrats like Manchin during negotiations on these domestic issues, according to Walter. “There’s a lot of leverage now for moderate Democrats to distance themselves from some of these Democratic proposals,” she said.

“There’s a lot of leverage now for moderate Democrats to distance themselves from some of these Democratic proposals.”

There are also longer-term electoral consequences for the president and his party to worry about. Democrats hold a narrow majority in the House of Representatives and control an evenly divided Senate. Control of both chambers will be decided in next year’s midterm elections.

While the president’s approval and disapproval among party faithful has remained relatively stable, his support among independent voters has dropped considerably. For the first time since he took office, more independent voters disapprove of Biden than approve, according to the PBS NewsHour/NPR/Marist poll. Just 36 percent approve of his job performance, down 12 points since June. Fifty-five percent of independents disapprove.

That dip in support is something for the White House to watch and potentially worry about heading into the 2022 midterm elections, according to Walter.

“If your party controls all three branches of government and you are going into an election where independent voters are deeply soured on the president, that has led to pretty disastrous outcomes in the midterms,” she said.

Indeed, in every midterm election since 2006, the party that controlled the White House has lost more than a dozen seats in the U.S. House, driven in large part by independent voters. With the current makeup, flipping just five seats would cost Democrats control of the House and could put the brakes on Biden’s agenda during the final two years of his term.