In a post-Roe U.S., what’s next for the anti-abortion movement?

For nearly 50 years, anti-abortion protesters have congregated in Washington every January to walk to the steps of the Supreme Court in opposition of Roe v. Wade, the Jan. 1973 decision that affirmed the national, constitutional right to an abortion.

But the dynamics changed dramatically last summer, when the hopes of anti-abortion activists were realized in the court’s overturning of Roe, leaving the legality of abortion up to each state. With their highest-profile goal now a reality, organizers are reassessing how to move forward.

The March for Life will take place this year, but activists will be marching to the U.S. Capitol on Jan. 20 instead of the Supreme Court building. The venue change is a symbol of the anti-abortion movement’s shift in priorities, from a focus on the nation’s highest court to convincing legislators — and the public — to embrace their position.

WATCH: How anti-abortion activists laid the groundwork for rollback of Roe v. Wade

With the fall of Roe, 13 states, mostly in the South and Midwest, have made abortion illegal. Another, Georgia, has banned the medical procedure for those more than six weeks pregnant. Anti-abortion organizers (who often refer to themselves as pro-life activists) say they’ve seen elevated interest in community activism since Dobbs.

Yet they remain far off their ultimate goal – eliminating abortion in the United States. In November’s midterm elections, three states enshrined abortion rights in their constitutions and two rejected stricter abortion laws. Analysis suggests that abortion was a key motivator for turning out Democrats, who performed better in the elections than expected. Most Americans favor legal abortion access, polling finds, and donations to abortion rights groups increased in the immediate aftermath of the Dobbs decision.

Research has long shown that abortion is a common and medically safe procedure, and the American College of Obstetricians and Gynecologists calls it “an essential component of women’s health care.” But those who oppose it, often on religious grounds, believe it is tantamount to murder.

Some anti-abortion groups have already mapped out their plans for capitalizing on the fall of Roe while others are still figuring out what their next goals should be.

Anti-abortion activists’ greatest ambition is to shape public opinion on abortion regardless of whether the procedure is legal, several of them said in conversations with the PBS NewsHour. The same advocates are also concerned about people who face unexpected pregnancies, and said that they want to expand social safety nets to help parents and infants — though much of their vision of the safety net is centered around Christian religious community.

“Quite frankly, this is all kind of new and there’s so much up in the air,” said Carol Tobias, president of the National Right to Life Committee, of her organization’s plans. “It’s kind of like throwing darts at that board to see where it’s going to land. We’re certainly going to try to direct it, but there are just a lot of unknown possibilities out there yet.”

“Nothing begets success like success,” said Shawn Carney, co-founder, CEO and president of 40 Days for Life, an anti-abortion activist group that twice a year organizes simultaneous prayer campaigns outside of abortion facilities for 40 days.

Here are the three big areas that have drawn activists’ focus now.

Perhaps the broadest approach, and one that’s unlikely to be immediately successful, is the pursuit of national anti-abortion legislation. It’s the goal behind the March For Life taking its demonstration to the U.S. Capitol in January, said Jeanne Mancini, the organization’s president.

But national legislation permanently banning abortion or making it far less accessible has no chance in the current Democratically controlled Senate, and might even be a tough sell if Republicans control both houses of Congress in the future. Before Republicans won back control of the House, Democratic members passed legislation that would codify abortion rights, but the effort stalled in the Senate, where 60 votes are required to avoid a filibuster, and some Republican senators have expressed wariness of an abortion ban. On Wednesday, the GOP-led House approved two abortion-related measures that are seen as having no prospect of Senate passage. 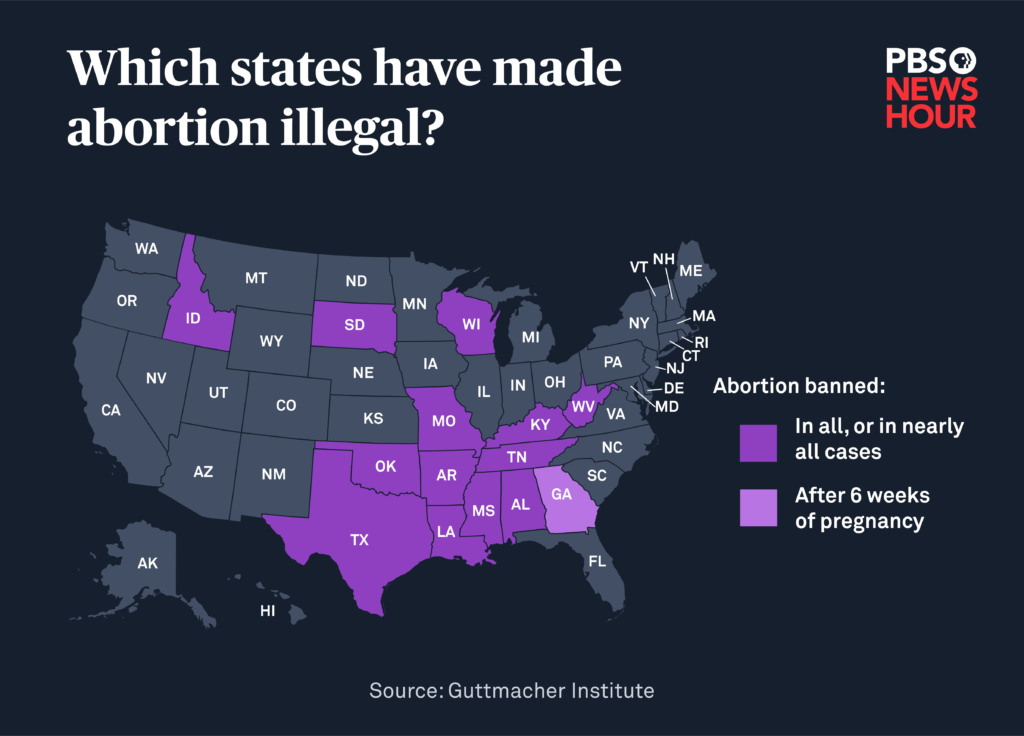 In states that might be friendly to passing restrictive abortion laws, advocates will continue to lobby legislators, as Mancini wrote in an October blog post for March for Life.

“We must also march in our state capitols, urging our state legislators to pass life-saving protections for the unborn,” Mancini wrote.

READ MORE: How the U.S. compares with the rest of the world on abortion rights

Medication abortion is among the next major fights for anti-abortion activists, Tobias said. Federal regulation allows medication abortion to be accessed via telehealth and pills can be mailed, making it difficult to restrict.

“It’s difficult to say that any state is solid and not going to be touched in any way,” she said.

Maintaining access to abortion is still popular in the U.S. overall, with 62 percent of Americans saying it should be legal in all or most cases, according to a July report by the Pew Research Center. Changing hearts and minds is crucial, Tobias, Mancini and Carney all said. Even in states like New York, Maryland and California, where abortion is likely to be legal for the foreseeable future, the goal is to change public sentiment so that people who can access abortions won’t want them.

“No one grows up wanting an abortion,” Carney said.

WATCH: An anti-abortion advocate on what comes after Roe

That’s where activists come in. In partnership with 40 Days for Life, churches organize activists to stand outside abortion clinics for 40 days and hold signs opposing abortion, typically in view of cars and other people passing by. Even in Tennessee, where abortions are now illegal, activists aligned with the organization protested — and prayed — outside of CHOICES clinic in Memphis throughout the month of October, holding anti-abortion signs and in opposition of the clinic’s second location in Illinois, where abortion is still legal. 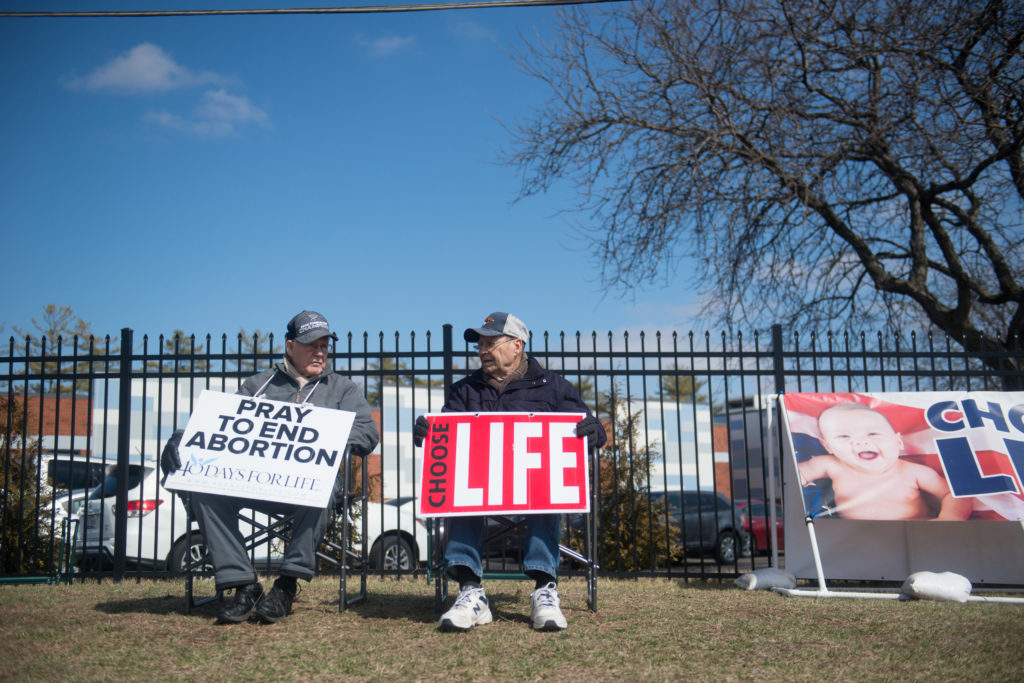 “40 Days for Life” protestors sit outside the Planned Parenthood clinic in Fairview Heights, Illinois, on March 8, 2022, before Roe v. Wade was overturned. Photo by Neeta Satam for The Washington Post via Getty Images

The goal of groups like Carney’s is to work to shut down abortion clinics. The ability of an abortion clinic to stay open is contingent on the public’s use of it — it’s a market-driven service, Carney argued, and one way to drive down demand is to open what they see as alternatives, such as crisis pregnancy centers that steer women away from abortions. Abortion rights advocates say those organizations can scare off or pressure people searching for abortions.

Carney said 40 Days for Life is “built for a post-Roe world,” in which legislation has been largely settled, he said. He sees much left for his organization to do in terms of changing personal opinions, building on what he sees as a “high tide” moment.

“We just had our largest campaign ever in 622 cities — the first campaign after Roe, and even I was surprised after that,” Carney said. In his experience, free crisis pregnancy centers offer alternatives that make it easier to pressure abortion facilities to close.

“We feel very good about where we are,” he said.

READ MORE: Inside a Memphis clinic during its final days of abortion care

March for Life’s reach has also expanded, Mancini said, with state marches in five capitals in 2022 and plans to double to 10 this year. She added that the organization hopes to have annual marches in every state within the next five to seven years.

“There’s just a fruitfulness to gathering the grassroots together. Whether that is to just buoy the spirits of pro-life elected officials to know that the people are there for them, or to actually campaign against a certain … bill, we’ve seen it’s very powerful,” she said.

One criticism of the drive to eliminate abortion is that the nation’s maternal and infant care is inadequate for many families, especially those with low incomes. States that have the most restrictive abortion laws also have the weakest safety nets, an NPR analysis found.

Nearly half of people who get abortions live below the federal poverty level, according to the Guttmacher Institute, a reproductive health and rights research organization. Nearly 60 percent of abortion patients already have children.

Expanding programs to aid vulnerable pregnant people and parents is the next step for the movement, said Kayla Kessinger, West Virginia coordinator for Her PLAN, an arm of the anti-abortion group the Susan B. Anthony List.

In West Virginia, pregnancy may collide with complications such as poverty, addiction or mental health struggles, she said.

The goal of Her PLAN is “to make sure that vulnerable women facing unexpected pregnancies have the resources and the support and the services that they need through pregnancy and beyond to really empower them to choose life for themselves and for their babies,” she said. Those resources can include health care assistance, child care, connections to foster and adoption services, legal support and mental health services.

After the Dobbs decision, Kessinger said, Her PLAN West Virginia was flooded with dozens of people wanting to contribute to the cause.

“What I’m seeing is this groundswell of support for women and children and families, at least in the Mountain State, from people across our communities.”

Some offering help “have been active in the traditional pro-life movement for the last 50 years. And some of them are seeing this need for moms and babies and are just now starting to recognize that they have a gift that they can bring to the table to help support moms,” Kessinger said. “What I’m seeing is this groundswell of support for women and children and families, at least in the Mountain State, from people across our communities.”

One West Virginia couple was motivated by the Dobbs decision to open a pantry at their church for expectant and recent mothers, Kessinger said. The pantry stocks most things new parents might need, including bottles, baby clothes, maternity clothes, diapers, formula and even cribs, if they’re available.

“It’s almost like a light has been turned on,” she said. “Now you have people who may have been sort of on the outside looking in for a very long time, who are starting to have this desire planted deep down inside of them to support moms in ways that they didn’t even realize they could.”

In addition to expanding those networks, “We also recognize the need for the private sector and faith-based programs to work with the government to help provide assistance to women, children, and their families. That will look different in every state,” said Mary Owens, communications director at the Susan B. Anthony List. Texas, where abortion is banned, has programs to improve maternal and infant health, Tobias said, like offering voluntary home nursing care for pregnant people and new parents. At the same time, about one in four women of childbearing age in that state lacks health insurance, which is about double the national percentage, according to the March of Dimes.

Kessinger takes issue with the belief that anti-abortion activists’ passion for life is limited to fetuses.

“For years, the pro-life movement has been painted as something that it’s not — we care about women. We care about their families,” Kessinger said.

The abruptness with which nationwide legal abortion fell was a surprise to many anti-abortion activists, Kessinger said, albeit a welcome one. As abortion has become more restricted, she added, those activists want to maintain the momentum.

Left: Anti-abortion activists hold a banner as they walk in front of the U.S. Supreme Court building during the annual March for Life on Jan. 21, 2022. Photo by Jim Bourg/ Reuters