McGahn was a no-show. What’s next for the Trump obstruction probe?

House Democrats’ hopes of securing a first-hand account of how President Donald Trump may have obstructed justice appeared to dwindle Tuesday, after Don McGahn followed through on a White House directive not to testify before Congress.

The former White House counsel was scheduled to testify before the House Judiciary Committee, but he did not appear. On Monday, the White House had directed McGahn to skip the hearing and issued a statement saying he was not legally compelled to testify.

The showdown came after House Judiciary Committee Chairman Jerry Nadler, D-N.Y., subpoenaed McGahn in the wake of special counsel Robert Mueller’s report. Mueller wrote that McGahn told investigators that Trump told him to fire Mueller, something Trump has denied. McGahn did not follow through with that order, but Democrats have pointed to Trump’s demand as evidence that he obstructed justice.

Without McGahn’s appearance, Democrats must decide whether to try to force him to testify at a later date, or focus their efforts on hearing from other key witnesses and obtaining documents that could provide convincing evidence Trump impeded the special counsel’s investigation.

Can Democrats compel McGahn to testify?

Democrats can choose to hold McGahn in contempt of Congress, a step they began to take against Attorney General William Barr when he refused to testify to a congressional committee. (The House Judiciary panel voted to hold Barr in contempt; Democrats haven’t held a House floor vote yet.)

But a contempt of Congress vote comes with few enforcement measures. Witnesses can be fined or even arrested, but that’s an extraordinary step that hasn’t been taken since 1935. Either option would carry significant political risk, which is one reason Democratic lawmakers have been reluctant to take further action against Barr.

Lawmakers could take McGahn to court, and object to the White House’s legal reasoning for not allowing current and former officials to testify. But even if a court could order McGahn to testify, the process could take several weeks or months. And if Democrats lose the court fight, it would be another political blow that could translate to more public support for Trump, and wariness with the continued investigations into the president. 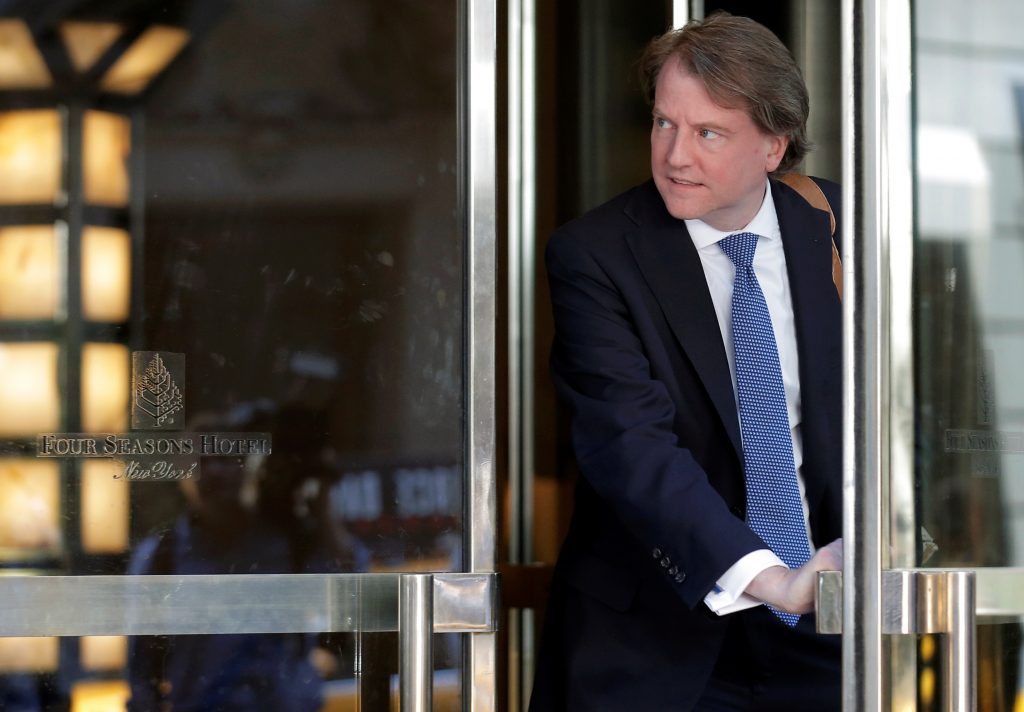 Democrats “are running out of options because they have played out the public relations game to its logical conclusion,” said Robert Ray, a former federal prosecutor who headed the Office of the Independent Counsel at the Justice Department from 1999 to 2002.

But Democrats got one boost Monday when a court ruled the accounting firm that prepared financial statements for Trump must comply with a House Judiciary Committee subpoena.

“That’s probably going to remove a little bit of the nihilism about that [court] process,” said Andy Wright, a partner at the law firm K&L Gates and a former associate White House counsel under President Barack Obama.

Still, Wright noted that the financial statements case concerns a private company, which typically have less leeway to avoid congressional subpoenas than officials within the Executive Branch. When it comes to compelling current and former administration officials to testify, Democrats have a limited range of options.

Who else could have a “smoking gun”?

McGahn is far from the only person lawmakers want to appear before Congress.

House and Senate Democrats are still hoping Mueller will testify. So far, lawmakers and the special counsel have not come to an agreement on when that will be or under what circumstances.

Because the special counsel’s office is still wrapping up the loose ends of its investigation, Mueller remains on the Justice Department payroll. As long as he is an employee there, the Justice Department, and ultimately Barr, appears to have the final say on any requests for him to appear before Congress.

The president and attorney general have not blocked Mueller from testifying, and Barr has said he has no problem with Mueller doing so. But Trump has said on Twitter that he thinks Mueller should not testify.

Once Mueller leaves his position, he is a private citizen and would be more free to speak to Congress, said Stephen Binhak, who served as an associate independent counsel in the Whitewater investigation on former President Bill Clinton.

Democrats have also threatened to subpoena Mueller. But lawmakers have seemed most interested in Mueller’s reaction to how Barr characterized his report, after the Department of Justice released a letter Mueller wrote expressing his concerns. On the obstruction question, former federal prosecutors say it’s unlikely Mueller would provide significant insights beyond what is already in the special counsel’s report.

In his 440-page report, Mueller “said what he meant,” Ray argued. “If he wanted to say more, he could have said more.”

In contrast, people who were in the room with Trump during critical moments on the campaign trail in 2016 and during his presidency could give Congress first-hand accounts that might include details that were not in the special counsel’s report. 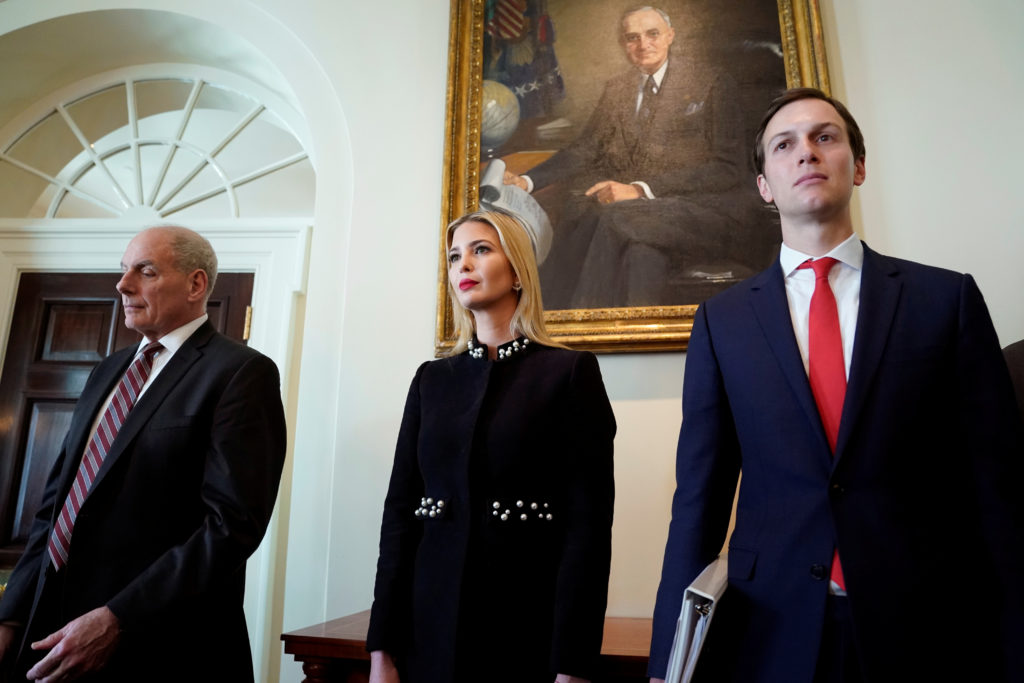 White House Chief of Staff John Kelly and White House senior advisers Ivanka Trump and Jared Kushner listen as U.S. President Donald Trump holds a cabinet meeting at the White House in Washington, on March 8, 2018. Democrats could subpoena other presidential advisers but the White House is certain to fight the orders. Photo by Kevin Lamarque/Reuters

But a number of key people close to the president, such as former national security adviser Michael Flynn and Trump’s former attorney, Michael Cohen, have already testified before Congress, so it’s unclear exactly who else Democrats would target.

Other potential witnesses include Donald Trump Jr., the president’s eldest son who has agreed to another interview with senators to discuss the June 2016 Trump Tower meeting, as well as other White House advisers, such as McGahn’s chief of staff, or other Trump family members such as Jared Kushner and Ivanka Trump, who both serve as White House advisers.

When it comes to McGahn, the White House is arguing a broad legal case that, it says, goes beyond executive privilege and indicates “the President’s immediate advisers are absolutely immune from compelled congressional testimony,” according to a legal memorandum released Monday.

If Congress subpoenaed other administration officials, they likely would also refuse to testify and lawmakers would again have to decide whether to take the cases to court or hold the potential witnesses in contempt.

Democrats could also subpoena other members of Mueller’s team, or other people near the president. Secret Service agents, for example, were ordered to testify in the scandal involving Clinton and Monica Lewinsky. But the White House would likely fight those subpoenas as well, and testimony from a Secret Service agent, while possibly intriguing, would likely not include the fireworks that would come from a hearing with someone of McGahn or Mueller’s stature.

Could documents hold the key?

House Democrats have subpoenaed the full, unredacted Mueller report as well as its underlying evidence. So far, the Justice Department has refused to comply, invoking executive privilege to block the release of the documents. The agency says grand jury information in particular — which was part of the redacted information in the report — is protected by law.

Congress could sue to compel the White House to comply, but past judges have only allowed grand jury information to be revealed during impeachment proceedings. McGahn’s refusal to testify has led some Democratic members of Congress to call for the start of impeachment hearings.

But even if lawmakers got the documents through court rulings, the evidence would still be subject to interpretation. “Even the most blockbuster document usually needs some explanation,” Binhak said.