When U.S. Attorney General William Barr appears before the House Appropriations Committee Tuesday, he doesn’t plan to mention special counsel Robert Mueller nor the investigation into Russian election interference, according to prepared remarks released by the committee.

Tuesday’s Department of Justice budget hearing will be Barr’s first time on Capitol Hill since Mueller filed his report on the Russia probe and possible ties to President Donald Trump’s 2016 campaign. On Wednesday, Barr will discuss his agency’s Fiscal Year 2020 budget request before the Senate Appropriations Committee. At both hearings he’s likely to face questioning over Mueller’s report.

Barr has faced scrutiny from Democratic lawmakers for his four-page summary of Mueller’s report, which took 22 months to complete, and is reportedly nearly 400 pages long. While Mueller and his team did not reach a conclusion on whether Trump obstructed justice, and reportedly laid out evidence on both sides of the question, Barr said in his summary that there is not enough evidence to establish the president obstructed justice — a conclusion some lawmakers felt was premature without the full report in hand.

Last week news reports suggested that members of Mueller’s team are frustrated with Barr’s letter, which they saw as oversimplifying their more complicated findings. Three-quarters of Americans think the full Mueller report should be made public, according to a PBS NewsHour-NPR-Marist poll conducted after the report was filed.

Barr has said he will release a redacted version of Mueller’s report by mid-April and has agreed to appear before Congress on the matter in early May.

At Tuesday’s hearing, Barr will instead focus on combating violent crime, enforcing and improving immigration laws, and the opioid crisis, according to his prepared remarks — all key priorities over the next year, he says.

Below, click the image to read Barr’s full remarks. 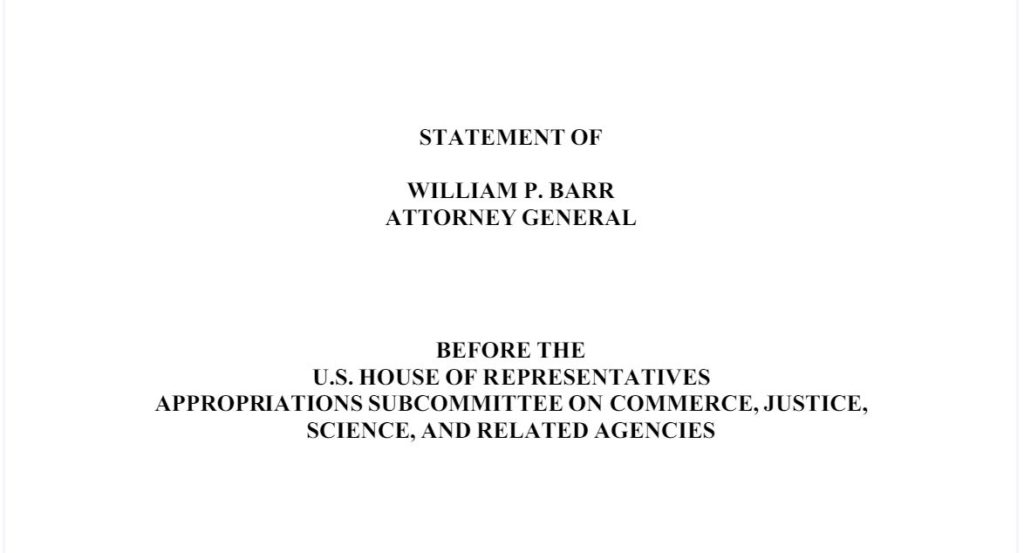