WASHINGTON (AP) — Bolstering its case for impeaching President Donald Trump, a House panel released a lengthy report Monday detailing its rationale for the charges and accusing Trump of betraying the nation for his own political gain.

Trump faces two articles of impeachment by House Democrats: abuse of power and obstruction of Congress. They point to Trump pressuring Ukraine to investigate 2020 political rival Joe Biden while withholding as leverage military aid the country relies to counter Russia as well as his efforts to block the House investigation.

The House will vote Wednesday on the impeachment articles approved last week by the House Judiciary panel. The vote is all but certain to result in Trump’s impeachment, though he’s expected to be acquitted in a Senate trial.

Detailing its case against the nation’s 45th president, the Judiciary panel released a 650-page report just after midnight. It said Trump “betrayed the nation by abusing his high office to enlist a foreign power in corrupting democratic elections.” 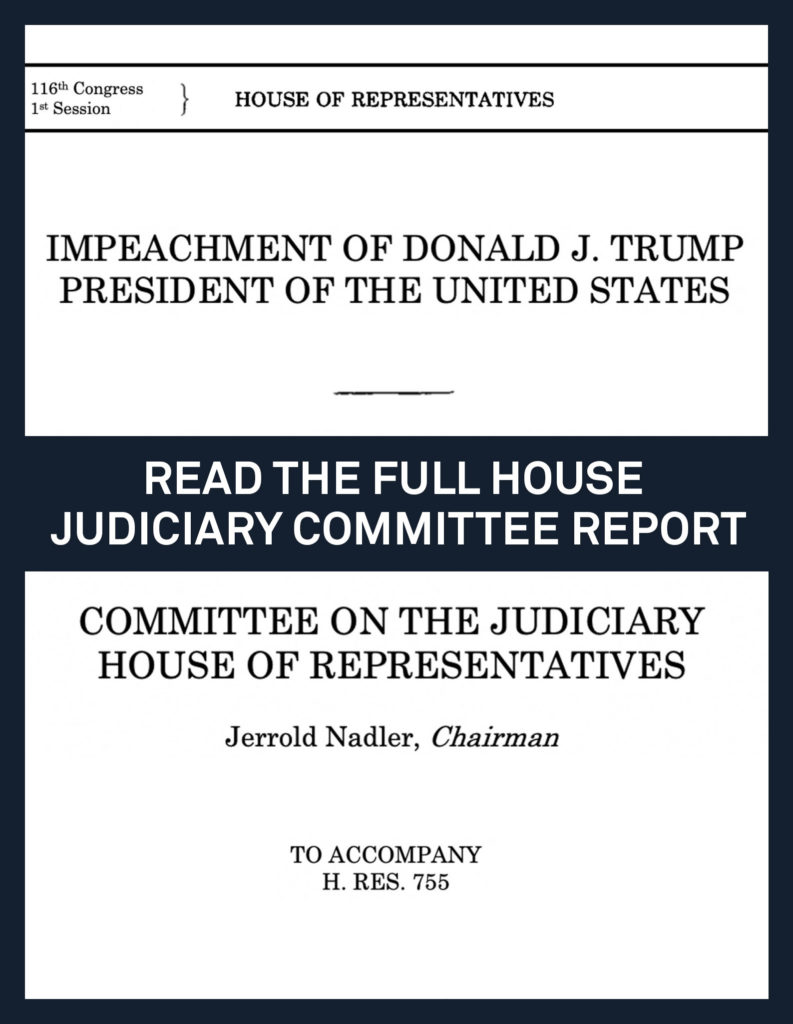 The panel summarized the evidence for impeachment compiled by the House intelligence committee, and said Trump “has demonstrated he will remain a threat to national security and the Constitution if allowed to remain in office.”

Trump, by refusing to cooperate with the House impeachment inquiry, violated the Constitution’s system of checks and balances, the report said.

In dissent, Republicans on the panel denounced the materials submitted by Democrats as “paltry.”

“The paltry record on which the majority relies is an affront to the constitutional process of impeachment and will have grave consequences for future presidents,” said Rep. Doug Collins of Georgia, the panel’s top Republican. “The quicker the majority report and the majority’s actions are forgotten, the better.”

And the White House press secretary tweeted Monday that the release of the impeachment report “in the middle of the night” underscored that impeachment effort was a “partisan sham.”

Only the fourth U.S. president to be charged in impeachment proceedings, Trump has insisted he has done nothing wrong. Votes are set for Wednesday in the House. But already attention is turning to the Senate trial, where the Republicans are expected to acquit Trump in January.

“There ought to be a fair trial where the whole truth comes out,” Senate Minority Leader Chuck Schumer told reporters Sunday in New York. “And I’m going to work to get that done.”

The top Senate Democrat called for new evidence and testimony from former national security adviser John Bolton, acting White House chief of staff Mick Mulvaney and two others as part of a detailed proposal outlined in a letter Sunday to Majority Leader Mitch McConnell to spur negotiations with the GOP.

Trump has expressed interest in a robust trial that would not only clear him of the charges in the Senate but also vindicate him, but his desire for a lengthy proceeding is something Senate Republicans are hoping to avoid.

McConnell and Schumer are expected to meet to discuss how to conduct the trial, much as the Democrats and Republicans did during Bill Clinton’s impeachment two decades ago.

The witness list will be key to the proceedings.

Despite Republican control in the Senate, McConnell’s slim 53-47 majority limits his ability to steer the impeachment trial. It takes 51 votes to approve most motions in the proceedings, even to set the rules, which means the leader can only afford to lose two Republican senators and still pass his preferred options.

Some Republican senators may feel pressure from Democrats to call additional witnesses or expand the proceedings, especially those up for reelection next year in swing states where voters are split in their views of Trump.

At the same time, Democrats face political risks if Republicans lean into Trump’s demands for a showier trial, summoning Biden or his son, Hunter Biden, or others to appear. Republicans claim without evidence that Hunter Biden’s work for a gas company in Ukraine merited the investigation Trump sought from that country’s officials.

In his letter, Schumer proposes a detailed structure and timeline for a trial to begin Jan. 7, with the swearing-in of Chief Justice John Roberts to oversee the proceedings and stretch for several weeks as Democrats subpoena witnesses and testimony, specifically around Trump’s decision to withhold military aid from Ukraine. A day of what Schumer calls “pretrial housekeeping measures” would take place Jan. 6.

Schumer additionally sets out a specific schedule that would allow for 24 hours of opening arguments by the House Democrats’ impeachment managers and then 24 hours for the White House lawyers to present their arguments, followed by days of witness testimony. He also sets time for questioning of House managers and Trump’s counsel by senators; final arguments by House managers and Trump’s counsel; and as many as 24 hours for deliberations by senators. All told, Schumer suggests as many as 126 hours of proceedings.

McConnell has indicated in recent days his preference for a swift trial without calling witnesses in what Republicans fear could become a spectacle. At the same time, the GOP leader has said he’s taking his “cues” from the White House and will conduct the proceedings as Trump wants them.

Democrats want to hear from Bolton, who labeled the alternative foreign policy being run by Trump lawyer Rudy Giuliani and others as a “drug deal’’ he wanted no part of. He left the White House in September.

They also want testimony from Mulvaney, who has acknowledged the military aid to Ukraine was being held up, as well as two other White House officials: Robert Blair, a top Mulvaney aide, and Michael Duffey, a budget official who was tasked with handling the Ukraine issue. Those officials defied House Democrats’ subpoenas to appear before the inquiry.

In the House, a group of freshmen lawmakers is urging leaders to make an unusual choice by naming Rep. Justin Amash of Michigan as an impeachment manager. A libertarian-leaning conservative, Amash left the GOP and is now an independent after becoming the rare Republican to call for the president’s impeachment. Rep. Dean Phillips, D-Minn., has been leading the effort, and talked with both the congressman and party leaders, his spokesman Bryan Doyle said.