Attorneys for Donald Trump said Tuesday the House’s impeachment of the former president “is facially and substantively flawed, and otherwise unconstitutional.”

In a response to House Democrats’ brief claiming Trump was responsible for the riots, attorneys Bruce Castor and David Schoen called for either the single article of impeachment against Trump to be dismissed “with prejudice,” meaning the case cannot be brought again, or for the Senate to acquit him.

Portions of the U.S. Constitution dealing with impeachment require “that a person actually hold office to be impeached,” they write in one of their answers to Democrats’ arguments. While Article II, as the attorneys reference, says the president “shall be removed from office on impeachment for, and conviction of, treason, bribery, or other high crimes and misdemeanors,” Article I also states that a judgment in an impeachment case “shall not extend further than to removal from office, and disqualification to hold and enjoy any office of honor, trust or profit” and other penalties under law.

A Congressional Research Service report published last month noted that while the Constitution does not directly answer the question of whether Congress can impeach and try a former president for their conduct in office, “it appears that most scholars who have closely examined the question have concluded that Congress has authority to extend the impeachment process to officials who are no longer in office.”

The House voted a week after the Jan. 6 attack on the Capitol to impeach then-President Trump for an unprecedented second time. In the 232-197 vote on Jan. 13, ten Republicans joined all of their Democratic colleagues to impeach Trump for incitement of insurrection, which came as then-Vice President Mike Pence sat in session to confirm the Electoral College vote that secured current President Joe Biden’s win in the 2020 presidential election.

In their response, Trump’s attorneys denied claims that the former president “incited the crowd to engage in destructive behavior” outside the White House as Congress convened to count the Electoral College votes. “It is denied that the phrase ‘if you don’t fight like hell, you’re not going to have a country anymore’ had anything to do with the action at the Capitol as it was clearly about the need to fight for election security in general, as evidenced by the recording of the speech. It is denied that President Trump intended to interfere with the counting of Electoral votes,” they wrote.

Castor, a former acting attorney general of Pennsylvania and district attorney who now works in private practice, and Schoen, an attorney in private practice, also denied that the former president endangered national security, Congress or the national tradition of a peaceful transition of power. “It is denied he betrayed his trust as president, to the manifest injury of the people of the United States,” they wrote. “Rather, the 45th president of the United States performed admirably in his role as president, at all times doing what he thought was in the best interests of the American people.”

The Senate acquitted Trump in his first impeachment early last year. His second impeachment trial gets underway on Feb. 9. Read the full response from the former president’s lawyers. 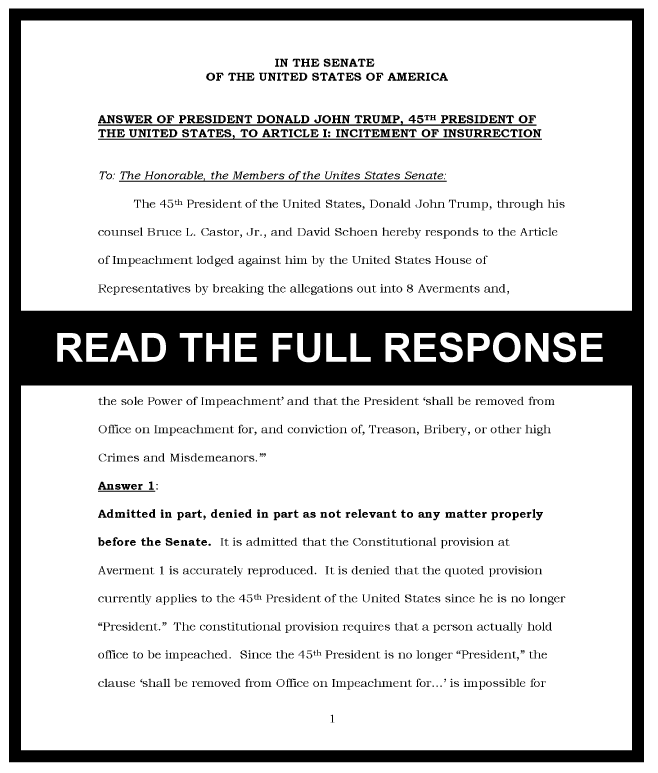 How Congress is addressing the Jan. 6 insurrection