Should Trump be removed? Poll shows Americans are divided equally

Despite an impending impeachment trial and a controversial move to kill a powerful Iranian military general, the partisan divides that have defined President Donald Trump’s tenure remain seemingly unmoved. When it comes to Trump’s approval rating, whether he should be removed from office, or if he has done a good job of handling Iran, Republicans and Democrats are falling along party lines, according to the latest PBS NewsHour/NPR/Marist poll.

With the House of Representatives preparing to vote to send the articles of impeachment to the Senate on Wednesday, Americans are split evenly about whether or not the Senate should remove Trump from office. An equal share — 47 percent — either support the U.S. Senate removing Trump from office, or oppose ousting him. An additional 6 percent of respondents said they were unsure. 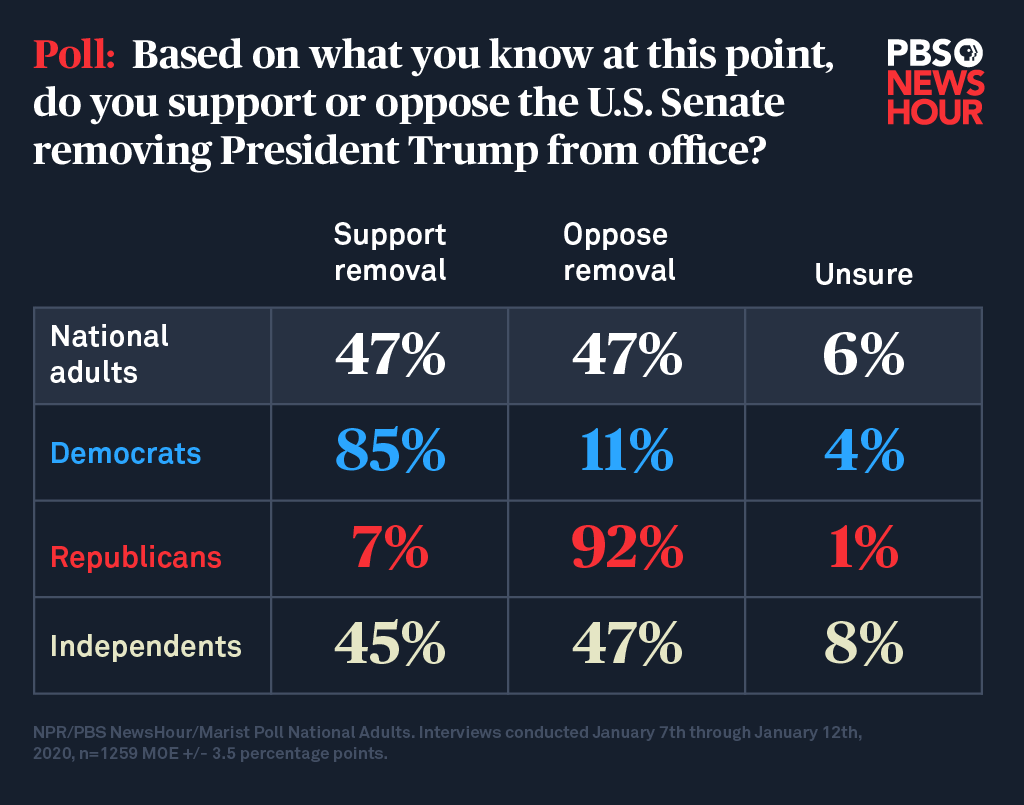 “There’s not a lot of movement” in public opinion about the fate of Trump’s presidency, said Lee Miringoff, who directs the Marist College Institute for Public Opinion. Dynamic day-to-day news about global tensions and impeachment are “reinforcing” people’s existing opinions about Trump, further hardening divisions.

On Dec. 18, the House voted to impeach Trump over abuse of power and obstruction of Congress tied to his dealings with Ukraine, making him the third president in U.S. history to carry that distinction. This week, the Senate is expected to start trial proceedings against Trump, who said lawmakers should dismiss his impeachment case without a trial.

Despite the historic implications of impeachment and possible ramifications for American democracy, this is “a Washington story,” said Democratic strategist Jennifer Holdsworth.

Democratic candidates campaigning to be the next president plan to steer clear of impeachment while on the trail, Holdsworth said, because for voters, the topic pales in importance to issues such as health care, education and cost of living. The nation is “deeply, deeply divided,” she said, and candidates will try to respond by pitching plans to unify the country during upcoming Democratic presidential debates, caucuses in Iowa and primaries in New Hampshire.

Some contenders cannot avoid impeachment, as the senate rules state that all senators, including 2020 candidates Sen. Elizabeth Warren, Sen. Amy Klobuchar and Sen. Bernie Sanders, must be sworn in as jurors for the trial.

On Jan. 3, a drone was used to kill Iranian Revolutionary Guard Gen. Qassem Soleimani at Baghdad International Airport. Trump defended the targeted killing of Soleimani, saying the U.S. “saved a lot of lives” and that “they were planning something.” 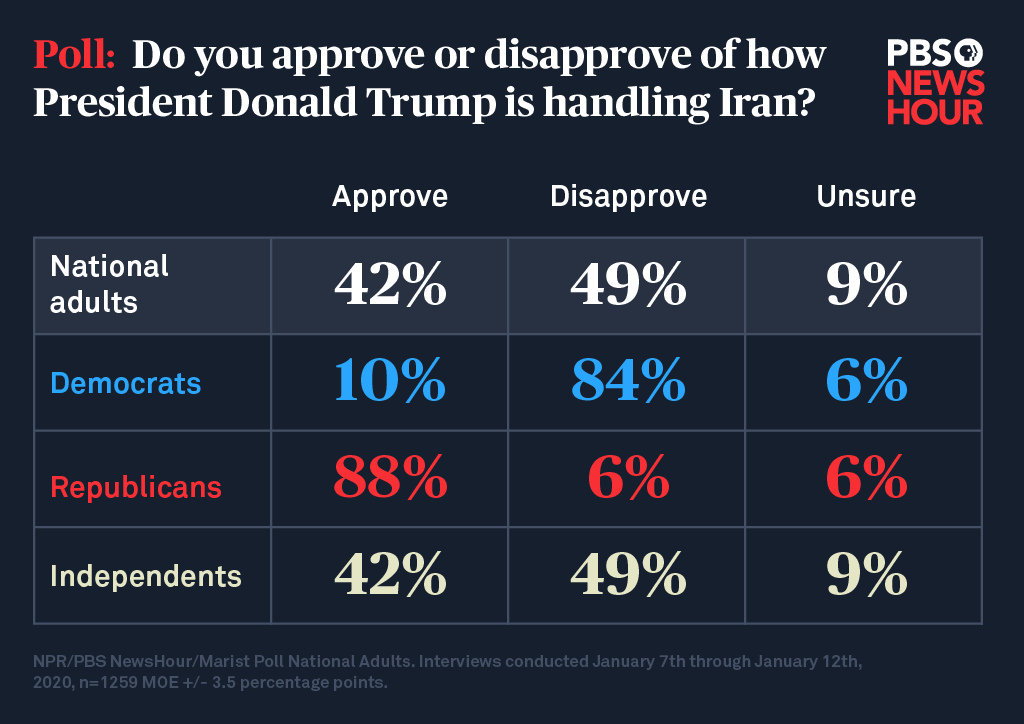 Critics pushed back on those remarks and said there was scant evidence that Soleimani and Iran planned any specific attacks, and that the White House had not been sufficiently transparent with Congress about its plans under the War Powers Act. House Speaker Nancy Pelosi said the killing of Soleimani “endangered our servicemembers, diplomats and others by risking a serious escalation of tensions with Iran.”

Beneath those numbers, a partisan divide quickly emerges, with 84 percent of Democrats, 49 percent of independents, and just 6 percent of Republicans disapproving of the president’s Iran moves.

Since his inauguration, Trump’s job approval numbers have hovered in roughly the same place — between the mid-30s and mid-40s, according to Marist’s polling data going back to February 2017.

In recent years, those partisan differences have worn away the ties that once bound Americans together during national tragedies, conservative strategist Rick Wilson said. A future national emergency could push the nation to the brink, he said, because “the divisions are so deep and the anger so profound, both sides are going to be so unwilling to work with each other.”

Everything in public life is now a partisan test, with both sides focused on figuring out whose side won, “no matter what the consequential underpinnings are,” Wilson said. “We’ve become so mired in partisan outcomes, there’s no national interest anymore.”

Left: Neither impeachment nor Iran have broken the public's deadlocked opinion over President Donald Trump's job performance while in office, according to the latest PBS NewsHour/NPR/Marist poll.