LAS VEGAS — For Erika Marquez, supporting Bernie Sanders ahead of the Nevada caucuses was deeply personal. The 32-year-old lives in Las Vegas with her husband, Daniel Capote, and their 13-month-old son. Marquez is pregnant with their second child, but the couple doesn’t have health insurance.

Marquez is undocumented, but is shielded for now from deportation by the Obama-era Deferred Action for Childhood Arrivals program, known as DACA. Sanders’ support for DACA and his “Medicare for All” proposal gives her hope for the future, Marquez said in an interview in the days leading up to the caucuses Saturday.

As a DACA recipient, Marquez could not participate in the caucuses. But her husband, who is a U.S. citizen, supported Sanders, joining thousands of other Latino voters who backed Sanders and helped give him a decisive victory in Nevada. The win established Sanders as the frontrunner for the Democratic presidential nomination.

Sanders’ dominant showing with Latino voters wasn’t a foregone conclusion in Nevada. Latinos make up nearly 30 percent of the Nevada population. In 2016, Sanders edged out Hillary Clinton with Latino voters in Nevada but still finished second in the state. The Nevada caucuses this cycle, which are the first nominating contest with a diverse electorate, offered the first test for Democratic candidates breaking through to Latinos.

Sanders entered Nevada as the projected favorite, coming off a narrow victory in the New Hampshire primary. But Sanders significantly outperformed the polls, overwhelmingly beating his competitors. As of Sunday evening, with roughly 71 percent of the caucuses results counted, Sanders — who was declared the winner early Saturday — led with 47.5 percent. Former Vice President Joe Biden was in second with 20.8 percent, followed by former South Bend, Indiana Mayor Pete Buttigieg with 13.7 percent and Sen. Elizabeth Warren with 9.4 percent. 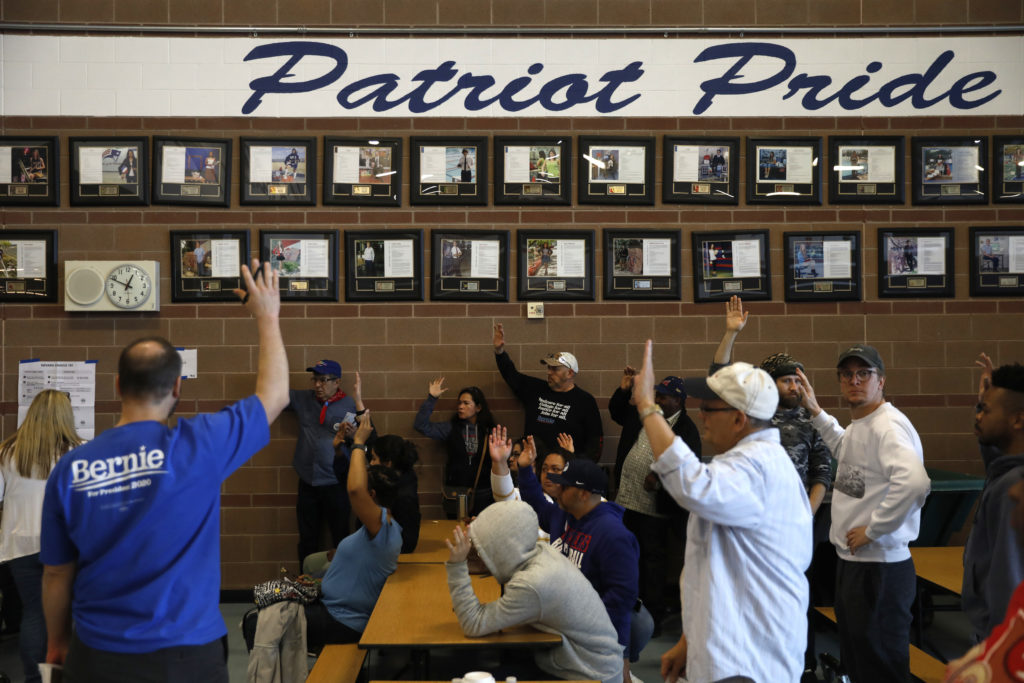 Sanders won 51 percent of Latino voters, according to entrance polls. Biden was a distant second, carrying 17 percent of the Latino vote. In the days leading up to the caucuses, interviews with more than two dozen Latino residents across Las Vegas illustrated how Sanders gained their trust.

Sanders’ win “makes a lot of sense given the demographics of the state and the message [he] has been focusing on: health care for everybody, free education, workers’ rights,” said Stephen Nuño-Perez, the director of communications and senior analyst at the polling firm Latino Decisions.

The Vermont senator’s calls for restructuring government systems that have disenfranchised people of color appeared to resonate with Latino residents, particularly during a time when many live in fear under the Trump administration.

“I am scared to go out and get attacked because of the color of my skin,” said Ruth Mantilla, 59, who lives in North Las Vegas.

Mantilla was born in El Paso, Texas, but grew up just across the border in Juárez, Mexico. She said she did not pay much attention to U.S. politics before Donald Trump’s victory in 2016. But Mantilla said she believed President Trump’s rhetoric around immigration was dangerous for the Latino community, and decided to become involved with the advocacy group Make the Road Nevada. This year, Mantilla participated in her first Nevada caucus, along with her son, Felipe Silva.

First-time caucus goers like Capote, Mantilla and Silva came out strong in 2020 for Sanders, who won 38 percent of first-time participants in the state and proved it’s possible to boost turnout among Latino voters.

About 415,000 of the more than 865,000 Latinos in Nevada are eligible to vote, according to Latino Decisions. More than half of these eligible Latino voters are under the age of 40, and many work in hospitality or in construction. Though the state’s Latino population has exploded over the last two decades, with growth mostly driven by immigration from Latin America, caucus turnout has remained low for a number of reasons.

For residents like Mantilla who speak little English, presidential caucusing in particular can be intimidating. When Nevada became an early caucus state in 2008, there wasn’t even an equivalent word in Spanish for caucus, said Andres Ramirez, a Nevada-based consultant and the former outreach director for the Nevada Democratic Party. Ramirez said part of his work at the time included developing Spanish-language explanations of the process.

Cultural ideas about politics have also long contributed to low turnout. Many Latinos in Nevada are newer immigrants, and some come from countries plagued by government corruption. “I’m from Mexico. We don’t like voting because we know that nothing changes,” said Maria Castro, 48, who lives in Las Vegas. “My family, they are [U.S.] citizens, but they don’t vote.”

Organizations like Make the Road Nevada and Mi Familia Vota are working to bridge these gaps among Latino voters. Ahead of the caucuses Saturday, canvassers from the organizations registered new voters outside grocery stores across Las Vegas and near the Department of Motor Vehicles. On Friday night, voters ate tacos, drank horchata and swayed to music before a bilingual caucus training session hosted by Mi Familia Vota and the Nevada Hispanic Legislative Caucus in East Las Vegas — the heart of the city’s Latino community.

Outreach campaigns like the ones on display this year appear to be paying off. Between 2014 and 2018, there was a 120 percent increase in ballots cast in Nevada’s Latino-heavy precincts, according to Latino Decisions.

Still, advocates said the Democratic Party and candidates themselves are responsible for making the effort to connect with Latino voters. It’s not enough to say Latino voters are important, said Astrid Silva, the executive director of Dream Big Nevada, campaigns also have to try harder to understand the diversity and differences within Latino communities. 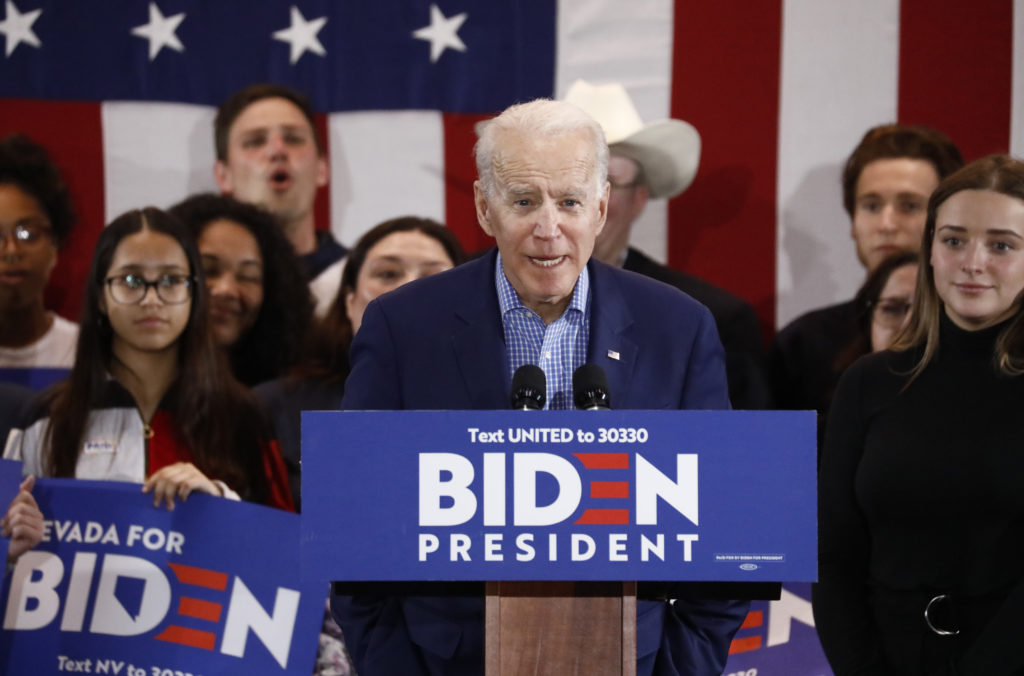 The Nevada Democratic Party tried to make the caucuses more accessible Saturday, amid increasing criticism that presidential caucuses are complicated, time-consuming and exclude large sections of the electorate.

The most notable change this year was a four-day early voting period, during which registered Democrats could cast their ranked preferences ahead of the official caucus day. An iPad app was then used to compile the early voting numbers with the caucus day totals.

The chaotic Iowa caucuses earlier this month raised concerns about the early voting period in Nevada, but the Saturday caucuses proceeded without any major mishaps.

When it came to reaching out to Latino voters in particular, “the effort over the past two weeks has been great,” Silva said. “But it shouldn’t have taken this long.”

Of all the candidates in the Democratic primary race Sanders appeared to understand Nevada’s complicated political dynamics best. His campaign invested in a monthslong grassroots effort to meet with Latino voters from a range of backgrounds — and about issues beyond just immigration.

“Senator Sanders not only listens, but understands the issues that our community deals with on [a] daily basis. He’s not scared to stand up for the voiceless,” said Felipe Silva, who caucused for Sanders along with his mother Ruth Mantilla.

Of course, roughly half of all Latino voters in Nevada backed other candidates, according to the entrance polls, an indication that Sanders still faces some competition.

At one caucusing location in North Las Vegas, several voters said they wanted a candidate with a proven track record on issues they care about. For some people, that person was Biden. Carlos Lainez, 18, said he was drawn to Biden because of his former role as vice president. Lainez said he also liked that Biden sponsored the 1994 Violence Against Women Act.

Others said electability was important. “I think [Tom] Steyer is the best choice to beat Trump,” said Rolando Cruz, 47, referring to the billionaire environmental activist. Like Trump, Steyer “is an outsider and a businessman,” Cruz said. “But he doesn’t have the baggage that Trump has.”

In the end, the rest of the field fell short in Nevada. Biden’s second-place finish was his strongest showing yet in 2020, and he claimed a comeback as the race turned to South Carolina. But the Nevada results further weakened the lock Biden seemingly had on minority voters early on in the race.

Sanders’ support among Latino voters could help him further distance himself from the rest of the primary field on Super Tuesday, which will include primaries in two other states with large Latino populations: Texas and California.

Still, some Latino voters said they remained torn between what they viewed as idealistic, versus realistic policy proposals.

Despite Sanders’ popularity, Robin Cruz, 58, said he prefers moderates like Biden and Buttigieg. Cruz said his main concern was how the more progressive policy plans pushed by Sanders could be financed and whether they could pass in Congress.

However the rest of the primary race turns out, Silva of Dream Big Nevada said she hopes the Democratic candidates learn the lesson that Latinos should be an ongoing part of their campaign strategy. “Latinos want to vote,” Silva said, “but it depends on which candidate is going to give them something to vote for.”

Left: Sen. Bernie Sanders won a majority of the Latino vote in the Nevada caucuses, helping him secure a decisive victory. File photo by REUTERS/Callaghan O'Hare