ABUJA, Nigeria (AP) — Ocheiga Enoch isn’t expecting much of a rice harvest from north-central Nigeria after floodwaters submerged his fields and those of so many other farmers this season.

Many in Benue state — known as the country’s “food basket” — now find themselves in the unusual position of looking for seedlings in preparation for next year’s farming season at a time when they should be harvesting the current crop.

“The kind of suffering we are passing through now is terrible,” Enoch said of the floods, now Nigeria’s worst in more than a decade after killing more than 600 people and forcing 1.3 million to flee their homes.

Above-average rainfall and devastating flooding have affected 5 million people this year in 19 countries across West and Central Africa, according to a new U.N. World Food Program situation report.

In Chad, the nation’s government this week declared a state of emergency after floods affected more than 1 million people there.

“This catastrophe resulting from climate change is one of the most severe the region has known for years, acting as a multiplier of misery for communities already struggling to keep their heads above water,” said Chad’s interim leader Mahamat Idriss Deby Itno.

The disaster has now worsened the fate of this Central African nation already going through a food crisis, said Mbaindangroa Djekornonde Adelph, an analyst in Chad.

Nigeria has recorded at least 600 deaths while authorities in neighboring Niger authorities say at least 192 people have died there as the result of storms, either from homes collapsing or from drowning in flood waters.

Already the floods have led to “a major increase in cholera cases and other preventable diseases in Nigeria,” the International Rescue Committee (IRC) warned in a statement on Friday, calling for more resources to scale up its response.

Experts point to unusual rainfalls and the failure of governments to set up early warning systems to better prepare for climate extremes.

The floods in West Africa are “majorly due to government negligence to environmental related issues like climate change over a period of time,” said Ibrahim Raji, a climate researcher focusing on the region. The situation “boils down to the government’s reluctance to address environmental issues,” Raji added.

Long before the floods and Russia’s war in Ukraine, West Africa already was facing its worst food crisis in 10 years with more than 27 million hungry people, according to a report released by international aid organizations in April.

Chi Lael, a spokeswoman for the U.N. World Food Program in Nigeria, is concerned about the “worrying harvest season ahead.” 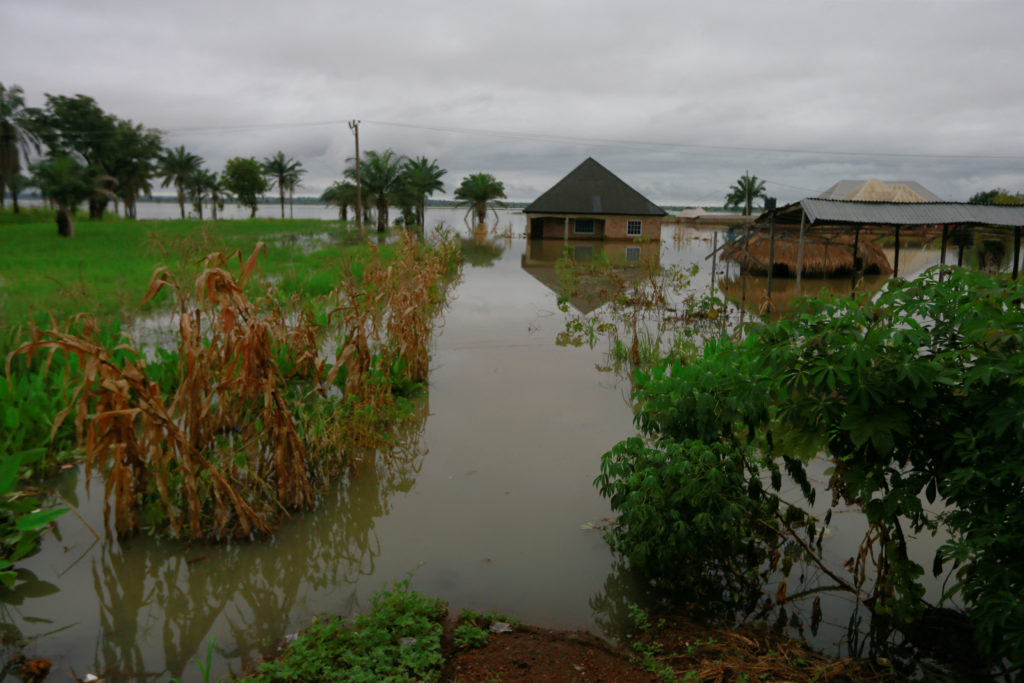 Maize and cassava crops are submerged in water as the Benue River floods in Makurdi, Nigeria, Oct. 1, 2022. Photo by Afolabi Sotunde/REUTERS

Some farmers have lost close to 75% of everything planted this year, said Kabir Ibrahim, national president of the local farmers association.

The damage caused by the floods in Nigeria also extends to livestock in areas like Bayelsa state, where Innocent Aluu said he lost nearly 10,000 fowl in his poultry farm to the floods, most of them dying from waterborne diseases.

“I feel like running away — nobody can think straight,” a devastated Aluu said by phone, estimating his losses at 30 million naira ($68,600).

In neighboring Niger, tens of thousands have also been displaced by the floods in the Maradi and Zinder regions, with many homes and farmlands damaged.

It is a similar tale in Cameroon where flood waters have caused significant damage in the northern region, destroying crops and houses.

“The rainfall this year is exceptional,” said Kousoumna Libaa, a climate specialist in Cameroon. “There have been sustained rains since the beginning of the season, since August, September and even until October now, it continues to rain.”

Experts fear that the damaged farmlands will further increase food prices at a time when inflation rates are already at record highs — Nigeria and Ghana at 20.7% and 37% respectively.

In Nigeria, WFP said it is providing emergency assistance in the state of Yobe, one of the hardest-hit places. But the agency urgently needs $129 million to support its operations in Nigeria over the next five months, its spokeswoman said.