Several thousand followers of Spain’s far-right Vox party gathered Saturday in their cars and on motorbikes in the center of Madrid and other Spanish cities to protest the Spanish government’s handling of the nation’s coronavirus crisis.

The party accuses the government of Socialist Prime Minister Pedro Sánchez of lying about the impact of the health crisis and for violating Spaniards’ rights by confining people to their homes and closing business during the lockdown.

Vox called for protesters to attend the protests in their vehicles and thus skirt the current prohibition on social gatherings in effect under the nation’s two-month long state of emergency designed to reduce contagion risks.

Vox called the protest the “Caravan for Spain and Liberty.”

“We will never forget what they have done,” Vox leader Santiago Abascal said from the open-top bus leading the car caravan as it inched down a Madrid boulevard.

“Do not doubt that we will make them face justice. They know it and fear our freedom. That is why they try to intimidate us.” 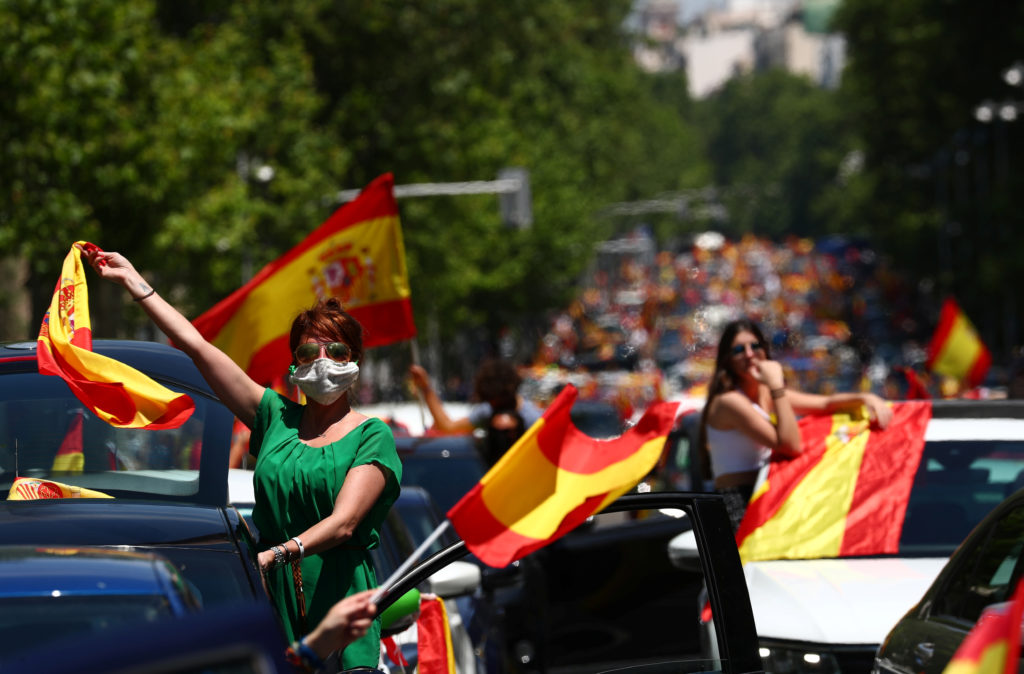 A demonstrator wearing a protective face mask waves a Spanish flag during a drive-in protest organised by Spain’s far-right party Vox against the government’s handling of the coronavirus disease (COVID-19) pandemic in Madrid, Spain, May 23, 2020. Photo by Sergio Perez/ Reuters.

Most cars and motorbikes were decked with Spanish flags. There were also small groups of people who participated on foot, with some not respecting the two-meter social distancing rules. More protests were held in Barcelona, Sevilla and other provincial capitals.

Spain’s government says that the confinement measures have been necessary to save the nation’s hospitals from collapse and thousands of more lives.

Over 28,000 Spaniards have been confirmed to have died from COVID-19. The government says that all the information it makes public on deaths and infections from the virus are provided by the regions, some of which are governed by opposition parties. No region has accused the government of relaying incorrect data.

Spain’s left-wing coalition government declared a state of emergency on March 14. The lockdown applied under the state of emergency, which has limited the right to free movement and assembly, has successfully reined in the outbreak.

Abascal and another leading Vox politician both fell ill with the virus after holding a massive party rally in early March. The party apologized for going ahead with the rally but blamed the government for not warning the nation of the danger. Abascal and his cohort have recovered. 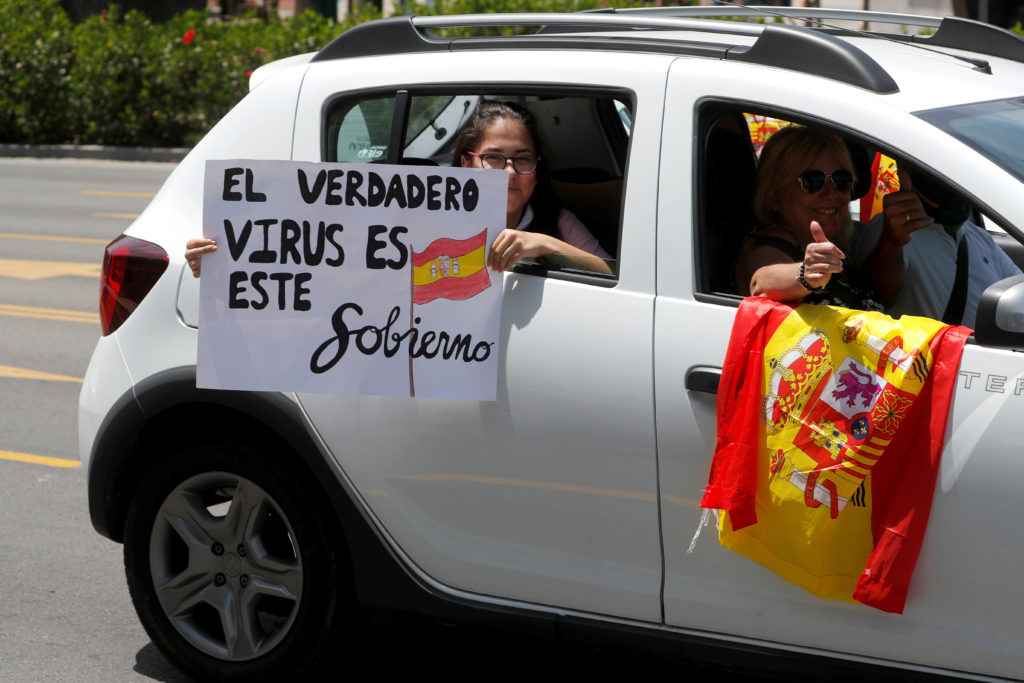 A girl holds a sign reading “The real virus is this government” during a drive-in protest organised by Spain’s far-right party Vox against the government’s handling of the coronavirus disease (COVID-19) outbreak, in Malaga, southern Spain, May 23, 2020. Photo by Jon Nazca/ Reuters.

Vox, which is strongly anti-migrant and anti-women’s rights, won its first seats in Spain’s Parliament in April 2019. It then made huge gains in a repeat election in November and is the third largest party in the national Parliament.

“I’m here to ask for the government to resign. We are tired of being kept in prison,” said 47-year-old bank employee Almudena Camara at the Madrid protest.

Saturday’s car protest follows a week of small protests in one of Madrid’s wealthiest neighborhoods and other cities that Vox has backed.

With its hospitals now able to handle the smaller load of cases, Spain is slowly moving toward gradually reactivating its economy and recovering social activities. On Monday, Madrid and Barcelona, the two hardest hit areas, will be able to join the rest of the country in reopening 50% of outdoor seating at bars and restaurants and gathering in groups of under 10 people.

Sánchez’s minority government of his Socialists and the left-wing United We Can party is under increasing pressure from opposition parties and some regional leaders to move forward with the rollback to reduce the already huge impact to the economy.

Spanish government spokeswoman María Jesús Montero said Friday that the right to protest “cannot be confused with a right to infect.”

“This is a country where people can protest freely, but we would like them to transmit the truth about what is happening in this country, where the right to expression is protected,” Montero said.