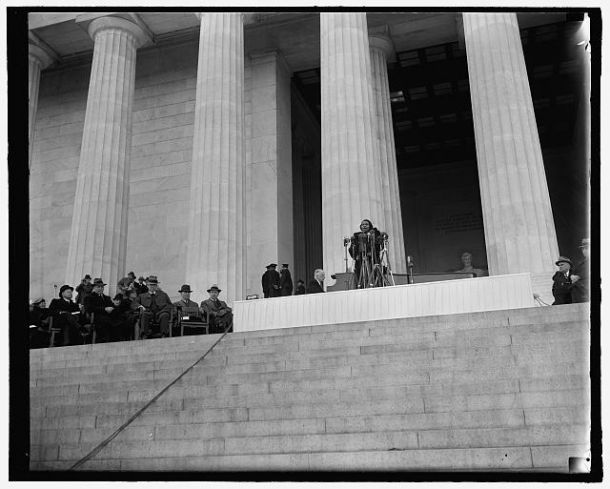 Washington’s prominent figures listen to Marian Anderson’s singing. Washington, D.C., April 9. Behind Marian Anderson, the heroic statue of Lincoln; beside her, Cabinet members and Senators; before her a crowd of 75,000 black and white listeners. Photo: Harris & Ewing

Marian Anderson’s rich contralto voice is one that will forever reverberate through the chronicles of American history. A trailblazer for Civil Rights, she remains a symbol of grace and courage in the face of prejudice. She famously performed at the Lincoln Memorial in 1939, after being barred from singing at Constitution Hall due to the color of her skin. Throughout her life, she sang as a way to uplift and unite people through music, with a voice that conductor Arturo Toscanini said comes once in a century. Whether you are new to Marian Anderson or a devoted fan, here are five songs you’ll love:

In her performance at the Lincoln Memorial, Marian Anderson slightly changes the words of the song. “Of thee I sing” to “Of thee we sing.” Known to be a modest person, she often used “we” to refer to herself and the many people she represented. Anderson was also aware that her concert would make a cultural impact by bringing awareness to the prejudice she and others faced at the time.

On a trip to Europe, Marian Anderson performed for the Finnish composer Jean Sibelius. “My roof is too low for you,” he said when welcoming her into his home. After hearing Anderson sing, he was so moved that he dedicated a version of “Solitude” just for her.

“My Soul’s Been Anchored in the Lord” (Florence Price)

Composed by the incredible Florence Price, this arrangement is also featured in the 1939 concert at the Lincoln Memorial. Price and Anderson faced considerable resistance to their talents as Black women artists. An important part of Anderson’s repertoire, presenting spirituals as a high art helped connect audiences to the depth of African American history.

Marian Anderson made her Metropolitan Opera debut when she was 58. She was the first African American to take the stage of the renowned opera house in 1955, and this is an aria that she sang in the role of Ulrica.

She had a diverse vocal repertoire spanning Italian, French, Russian, and in this case—German. Regardless if a listener understood the language Anderson performed, she could translate the meaning and emotion of a song to touch their soul.

Jasmine Wilson is a community engagement specialist at WNET. She is also a classically–trained vocalist, educator and media–maker.