Historian Raymond Arsenault recounts Marian Anderson’s bravery, from her record-breaking success in the music world to her influence on American democracy.

The date was October 24, 1964. President Lyndon Baines Johnson, the wily Texan who had overseen the recent passage of a landmark civil rights act, was in the White House. With the President’s declaration that the United States would soon overcome the seemingly intractable problems of racism and poverty, an ideal that he would later characterize as the “Great Society,” there was an air of expectation in Washington. But on that night there was also a reminder of how far the nation had come since the Great Depression of the 1930s, when Johnson had first entered the political arena. Five hundred yards southwest of the White House, a large auditorium known as Constitutional Hall was jammed with concert goers and on the stage a solitary figure held forth. 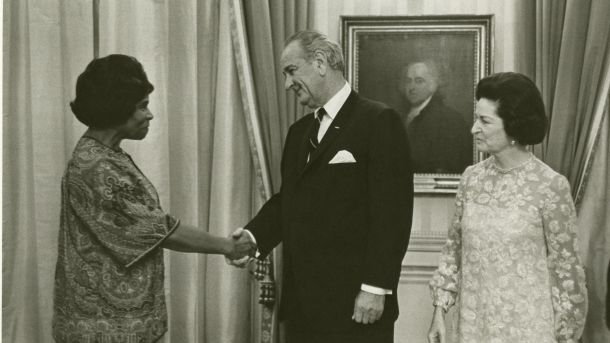 The woman standing in the spotlight, dressed in a floor-length satin gown, was the world-famous contralto Marian Anderson. The occasion was the opening concert of her long-awaited farewell tour. At the age of 67, after a half century of almost constant touring, Anderson had announced her retirement from the concert stage. The people seated in the front rows could see that she was no longer young, that her face was lined with wrinkles, her hair tinged with strands of gray. Her voice, though still beautiful, was no longer what it once was. Nearly fifty years of singing had taken its toll, and at the upper and lower ends of her incomparable three-octave range she now strained to deliver the perfect note. Yet no one seemed to care. Just seeing and hearing her perform on stage one more time was enough to send chills down the spine of almost everyone in the hall.

No one in the audience had to be told who she was or that this was a special occasion, a moment of sweet irony. They had come to bear witness to the glorious perseverance of a living legend. Year after year, polls had revealed that Marian Anderson was one of the most admired women in the world. Respected and beloved, she had no rival among Black women as an icon of racial pride and accomplishment. Part of her mystique was a magical voice, an assortment of sounds so haunting and ethereal that more than one maestro had judged her to be the greatest singer of the 20th century. But Anderson was more than a superbly gifted artist. She was also a symbol of resolute courage and human dignity.

Twenty-five years earlier, the proprietors of Constitution Hall–the Daughters of the American Revolution–had banned her from the hall, not because of anything she had done, but simply because she was Black. Thousands of Americans rushed to her defense, pleading with the Daughters to relax the Hall’s “white artists only” policy, but to no avail. When no other hall large enough to accommodate her many fans could be found, she had no choice but to sing in the open air. The concert, held at the Lincoln Memorial on Easter Sunday 1939, attracted no less than 75,000 people. Black and white, they came to hear the sound of freedom, and she did not disappoint them. Broadcast over a national radio network and memorialized in newsreels, her bravura performance represented an iconic moment in the history of American democracy. The Lincoln Memorial would be the scene of other such moments–most notably in August 1963, when Dr. Martin Luther King Jr. delivered his “I Have a Dream” speech at the March on Washington–but Anderson’s 1939 recital was the first time that the modern civil rights struggle invoked the symbolism of the Great Emancipator in a direct and compelling way.

As she stood on the stage of Constitution Hall 25 years later, Anderson represented a triumph of the human spirit. Yet one suspects that few members of the audience appreciated how difficult it had been for her to assume the mantel of leadership in a cause that transcended the world of music. Originating in the impoverished Black community of South Philadelphia, her story is one of struggle against self-doubt, racial prejudice and numerous other obstacles that would have vanquished a person of lesser resolve. During the 1930s, as the rising force of fascism promoted rank bigotry and racial oppression, her unprecedented conquest of the music world stood as a testament to the illegitimacy of racial typecasting. But this was only the beginning of a career that ultimately broke all barriers large and small, from the color bar at Constitution Hall to the all-white casting tradition at the famed Metropolitan Opera. Against adversity, Marian Anderson became one of the most extraordinary and influential figures of the 20th century thanks to her unbridled talent and tenacity.

Sweet Honey in The Rock: Raise Your Voice
Sarah Vaughan: The Divine One
Brian Wilson: Long Promised Road
Benny Goodman: Adventures in the Kingdom of Swing
Aaron Copland ~ About the Composer
Genius Within: The Inner Life of Glenn Gould