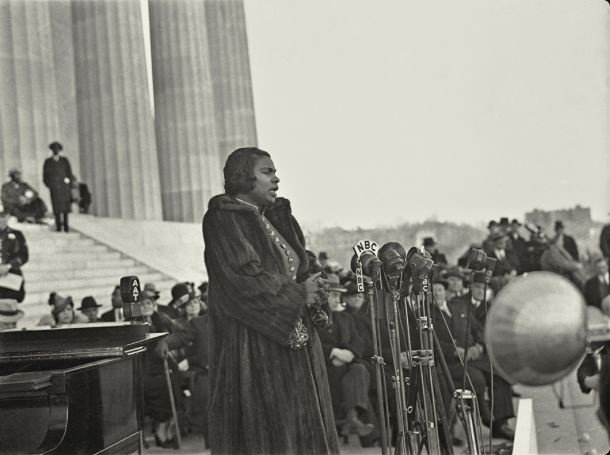 Marian Anderson, the legendary African American contralto, sang at the Lincoln Memorial on Easter Sunday in 1939 after she was refused a performance at Washington’s Constitution Hall by the Daughters of the American Revolution because she was black. Over 75,000 people attended the performance, which was broadcast live on the radio and arranged in part by First Lady Eleanor Roosevelt with the support of her husband, President Franklin D. Roosevelt, and the Secretary of the Interior, Harold Ickes, who introduced the broadcast.

It was a bold protest against racial intolerance, performed before a diverse crowd. In that moment, Anderson — despite being a fiercely private person — transformed into a symbol for the nascent civil rights movement, even inspiring a 10-year-old Martin Luther King, Jr., who listened on the radio.

Here’s Anderson’s Lincoln Memorial program. The final spiritual was cut off from the radio broadcast recording due to technological limitations at the time.

The original broadcast was restored and divided into tracks, available via this Spotify playlist:

And the final song from the Lincoln Memorial concert, cut off from the original broadcast recording, was arranged by the first African American woman to gain national prominence as a composer, Florence Price:

Genius Within: The Inner Life of Glenn Gould
Loretta Lynn: Still a Mountain Girl
A Duke Named Ellington
Patti Smith on Lou Reed and rock and roll
Yours For a Song: The Women of Tin Pan Alley
Sweet Honey in The Rock: Raise Your Voice