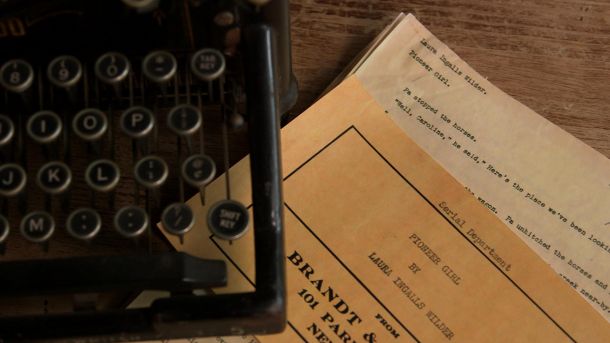 A Midwestern farm woman who published her first novel at age 65, Laura Ingalls Wilder transformed her frontier childhood into the best-selling “Little House” series. Wilder’s stories emphasized real life and celebrated stoicism and hard work. They continue to entertain and resonate with millions of readers today. Here’s a collection of favorite quotes and passages from the books to refresh your memories if you’ve read them, or to pique your curiosity if they’re still new to you: 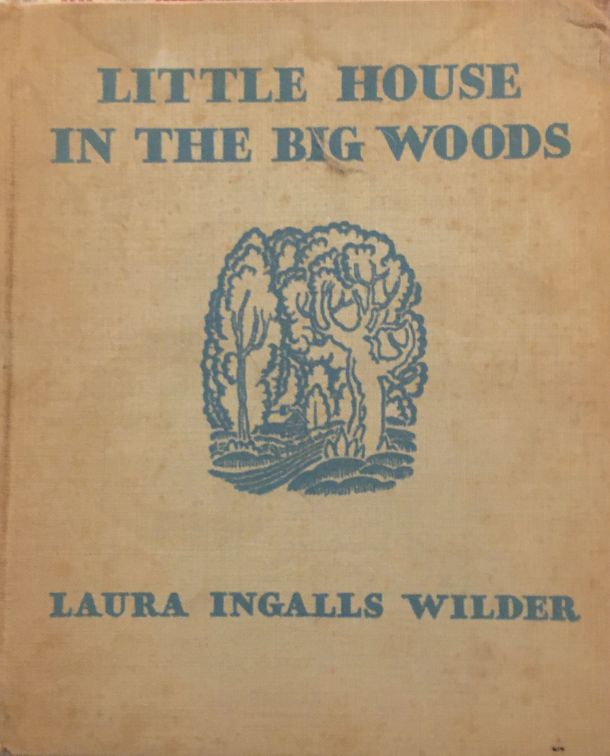 “When the fiddle had stopped singing Laura called out softly, ‘What are days of auld lang syne, Pa?’
‘They are the days of a long time ago, Laura,’ Pa said. ‘Go to sleep, now.’
But Laura lay awake a little while, listening to Pa’s fiddle softly playing and to the lonely sound of the wind in the Big Woods.
She was glad that the cozy house, and Pa and Ma and the firelight and the music, were now. They could not be forgotten, she thought, because now is now. It can never be a long time ago.”
Little House in the Big Woods

“They were cozy and comfortable in their little house made of logs, with the snow drifted around it and the wind crying because it could not get in by the fire.”
Little House in the Big Woods

“They had never thought of such a thing as having a penny. Think of having a whole penny for your very own. Think of 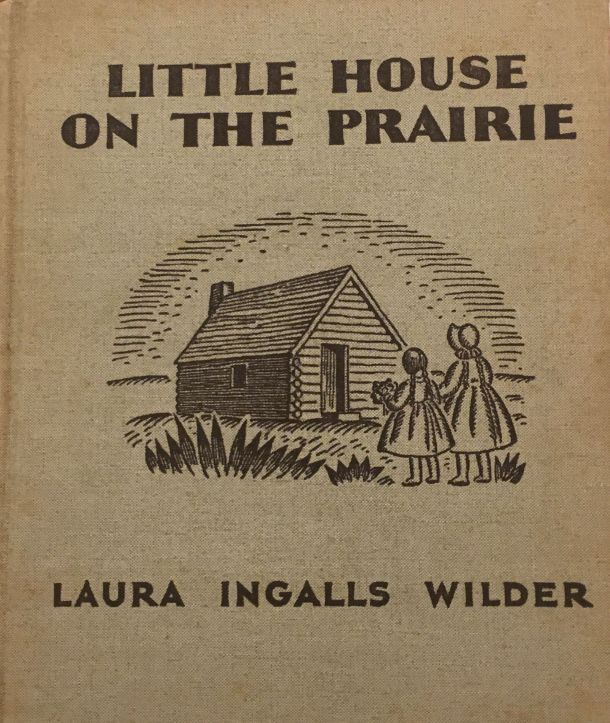 having a cup and a cake and a stick of candy and a penny.
There had never been such a Christmas.”
Little House on the Prairie

“Once you begin being naughty, it is easier to go on and on, and sooner or later something dreadful happens.”
On the Banks of Plum Creek

“‘Ma!’ she cried. ‘There is a Santa Claus, isn’t there?’
‘Of course there’s a Santa Claus,’ said Ma.
‘The older you are, the more you know about Santa Claus,’ she said. ‘You are so big now, you know he can’t be just one man, don’t you? You know he is everywhere on Christmas Eve. He is in the Big Woods, and in Indian Territory, and far away in York State, and here. He comes down all the chimneys at the same time. You know that, don’t you?’
Then Ma told them something else about Santa Claus. He was everywhere, and besides that, he was all the time. Whenever anyone was unselfish, that was Santa Claus. Christmas Eve was the time when everybody was unselfish. On that one night, Santa Claus was everywhere, because everybody, all together, stopped being selfish and wanted other people to be happy. And in the morning, you saw what that had done.”
On the Banks of Plum Creek 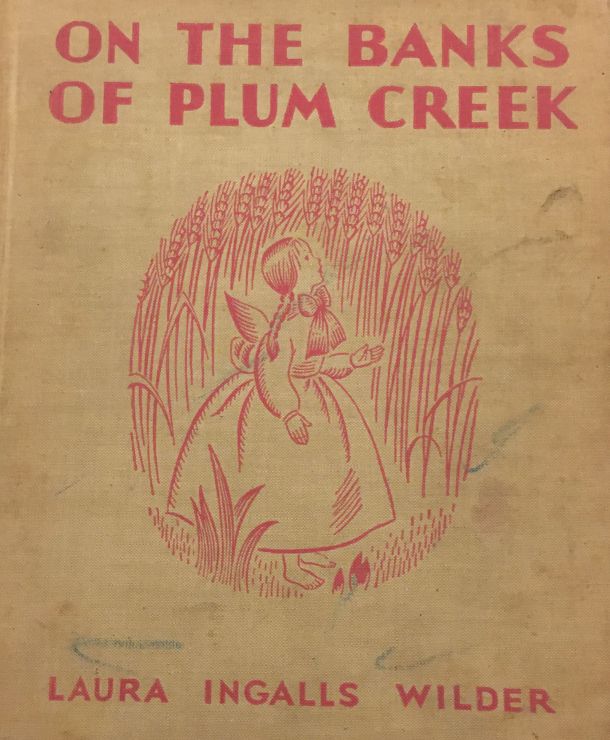 “Pa took her hand and comforted it in his big one. He said, ‘We must do the best we can, Laura, and not grumble. What must be done is best done cheerfully.'”
On the Banks of Plum Creek

“‘My goodness!’ Mary said. ‘I couldn’t be as mean as that Nellie Oleson.’
Laura thought: ‘I could. I could be meaner to her than she is to us, if Ma and Pa would let me.'”
On the Banks of Plum Creek

“‘These times are too progressive. Everything has changed too fast. Railroads and telegraphs and kerosene and coal stoves – they’re good to have but the trouble is, folks get to depend on ’em.’”
By the Shores of Silver Lake

“We’d never get anything fixed to suit us if we waited for things to suit us before we started.”
By the Shores of Silver Lake 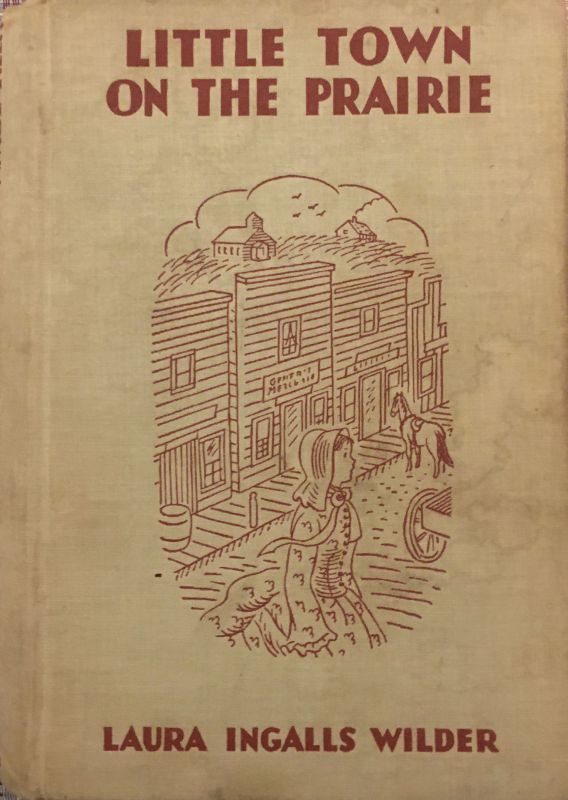 “Cold is not so cold, if you are not afraid of it.”
The Long Winter

“Laura felt a warmth inside her. It was very small, but it was strong. It was steady, like a tiny light in the dark, and it burned very low but no winds could make it flicker because it would not give up.”
The Long Winter

“Anybody knew that no two men were alike. You could measure cloth with a yardstick, or distance by miles, but you could not lump men together and measure them by any rule. Brains and character did not depend on anything but the man himself. Some men did not have the sense at sixty that some had at sixteen.”
The Long Winter

“‘This earthly life is a battle,’ said Ma. ‘If it isn’t one thing to contend with, it’s another. It always has been so, and it always will be. The sooner you make up your mind to that, the better off you are, and more thankful for your pleasures.’”
Little Town on the Prairie

“She had not known before that it takes two to make a smile.”
These Happy Golden Years

“‘Yes, and what good times we had when we were little,’ Laura answered. ‘But maybe the times that are coming will be even better. You never know.'”
These Happy Golden Years

“‘I, write a book?’ Laura hooted.  She said blithely, ‘I’m going to be an old maid schoolteacher, like Miss Wilder.  Write your own book!’”
These Happy Golden Years