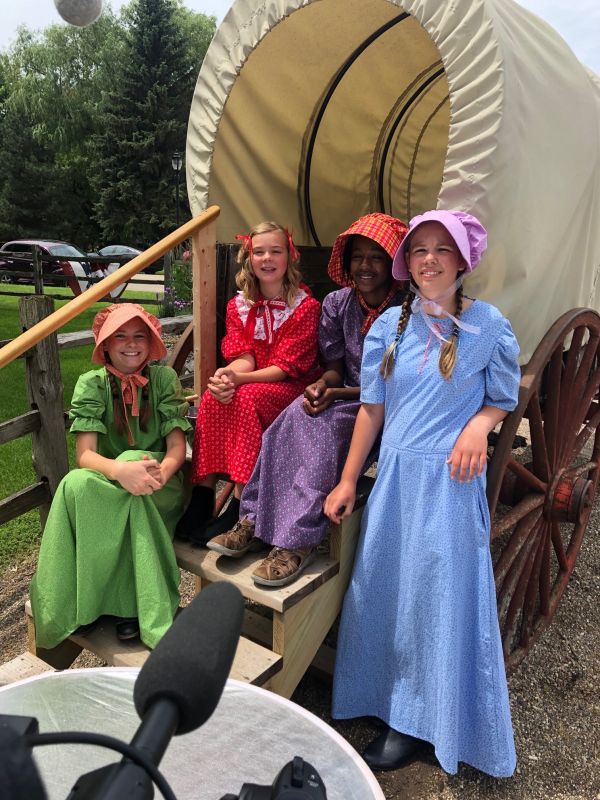 Some young “bonnetheads” pose for a photo during the taping of Laura Ingalls Wilder: Prairie to Page. Photo: Chris Czajka

The first time I stepped onto Ingalls Homestead in De Smet, South Dakota, the same plot of land Charles Ingalls farmed in the 1880s, a single thought overwhelmed me: Laura was here. Immediately, I wanted more. In the twenty years since that first visit, I’ve traveled to all of the places Laura Ingalls Wilder wrote about in her Little House series of books. More than once. (Okay, more than twice. Much more.)

We Wilder fans are an enthusiastic lot. Some, like me, are so enamored of the places she lived — “homesites” in the Little House vernacular — they channel their fandom into writing books that guide families who want to visit them. Others decorate their holiday trees with ornaments pulled from the pages of the book series: log cabins, covered wagons, tiny Charlotte rag dolls. They may bake gingerbread from Wilder’s own recipe, or stack their shelves with every book written about her.

Then there is the next level, where all one wants to do is learn more about Wilder. For those folks, we have Laurapalooza.

Launched in 2010 to provide an outlet for original research about Wilder’s life and work, Laurapalooza is the only conference dedicated solely to the pioneer author. It’s typically scheduled over two days, and in locations ideal for incorporating a homesite field trip: Minnesota, South Dakota, Missouri, Wisconsin. It’s hosted by the nonprofit Laura Ingalls Wilder Legacy and Research Association that I helped establish in 2009.

So what does one find at Laurapalooza? You’ll certainly see some sunbonnets. There’s likely to be a nine-patch or dove-in-the-window quilt display. You might hear a fiddler demonstrating the exact fiddling method Pa would have used, or a song from “By the Shores of Silver Lake” that you’ve previously heard only in your head. You may be asked to spell xanthophyll in a spelling bee.

But what you’ll primarily be doing is learning. Because there’s always more.

Like how to make the “’Long Winter’ bread” that kept the Ingalls family alive during the bleak and endless winter of 1880–1881, taught by none other than Barbara Walker, author of the “Little House Cookbook” that’s been in continuous print since 1979.

Or exactly what “grasshopper weather” means, and where the grasshoppers from “On the Banks of Plum Creek” actually came from, as presented by Barb Boustead, a meteorologist from the National Weather Service.

Perhaps you’ll shake with laughter as Eddie Higgins, who grew up reading the books in her native England, shares what was lost in translation — like how she could never figure out why Americans liked gravy on their cookies, which she knew as “biscuits.”

You may even get a lesson in physics. In the first of his many conference presentations, high school physics teacher Jim Hicks used data on speed, weight and weather to reconstruct Cap Garland and Almanzo Wilder’s alleged trip to buy seed wheat from a man named Anderson — “alleged,” because the only proof this trip happened was Wilder’s recounting in “The Long Winter.”

Because she was real, and because her ninety-year existence spanned kerosene lamps to color television, there is always more to learn. The world of Little House isn’t the made-up world of Harry Potter; it’s not even “Anne of Green Gables.” Laura Ingalls existed. Wilder’s books may have been labeled fiction, but that world is real enough that we still want to swim inside it today. As Wilder herself told an audience at the Detroit Book fair in 1937, “All I have told is true. But it is not the whole truth.” Laurapalooza blazes the perfect pioneer trail for chasing that whole truth.

Speaking of truth — or not quite — Laurapalooza has included rare but significant nods to the TV show that ran from 1974 to 1982, despite its loose relationship with the actual facts of Laura’s life. Dean Butler, who played Almanzo, debuted his documentary about his namesake at the conference, and Alison “Nellie Oleson” Arngrim, whose 2020 Facebook Live read-alouds from Wilder-related books were the Chinook wind of 2020, performed her stand-up comedy routine at Laurapalooza as well. Recent years have inspired both actors to investigate the historical side of Wilder’s life.

Since its inception, two events have become permanently engraved on the Laurapalooza slate. One is the silent auction fundraiser for the LIWLRA, where Little House–related trinkets, crafts and antiques go to the highest bidder. Interested in getting your hands on a copy of Pa’s “big green book” (called “The Polar and Tropical Worlds,” not “The Wonders of the Animal World” as Wilder mistakenly remembered), a piece of china from the pattern Wilder owned (Blue Willow), or a length of handmade lace reminiscent of Laura’s wedding gift from her friend Ida? Circle the silent auction a bit. And don’t forget to leave room in your suitcase, because you never know what you’ll find.

The second Laurapalooza hallmark is recognition of those who have supported her work and legacy all along. William Anderson, whose dedication to Wilder scholarship began with a correspondence with Wilder’s daughter Rose in the 1960s, was the first recipient of the LIWLRA’s Legacy Award in 2010. Since then, winners have included John Miller, whom the world sadly lost in 2020, a South Dakota native and university professor who wrote several books about Wilder and South Dakota; the aforementioned cookbook author Barbara Walker; and Jean Coday, a personal acquaintance of Wilder’s in their hometown of Mansfield, Missouri, who spearheaded the formation of the memorial society and museum after Wilder’s death in 1957. Coday passed on as well, in 2018.

Both Miller and Anderson have given keynote speeches at the conference, as has Pamela Smith Hill, who was tapped with editing “Pioneer Girl: The Annotated Autobiography,” Wilder’s original autobiographical manuscript that spawned the book series and became a surprise bestseller in 2014. And in 2019 keynote honors went to Caroline Fraser, whose book “Prairie Fires” won the Pulitzer Prize for Biography the previous year.

Another biography on Wilder? Well, of course. The more perspectives, the better. And the more truth we can unearth, the deeper our understanding — even if some of those are hard truths, like the Ingalls’ squatting on Native American land, or Rose Wilder Lane’s role in editing her mother’s books, or the ongoing controversies about the books’ overt racism. As Laurapalooza proves again and again, there’s always another homestead where we can sit down, get comfortable, and further share, discuss, and learn from the world of Laura Ingalls Wilder. The latch-string is always out.

Sandra Hume, a writer and editor from Colorado, is a founding board member of the Laura Ingalls Wilder Legacy and Research Association and author of the Land of Laura travel series.