To the untrained eye there are only trees and brambling shrubs, but Dr. Leslie Day’s eyes are seasoned experts, scanning Fort Tryon Park with the precision of a red-tailed hawk. “You see that, that’s whitewash from either an owl or a hawk, one of them was probably sitting right up above these stairs last night, and those nests high up in the trees are the summer nests of squirrels, see how high they are?” said Dr. Day, author of Field Guide to the Natural World of New York City, and retired New York City educator in ecology.

The park was no longer this static entity, but a complex ecosystem where the reverberating tapping of the woodpecker can be heard and nondescript trees and shrubs become northern hackberry trees, catalpa trees, and poison ivy, a plant feared by humans, but one whose berries are devoured by hungry migrating birds in autumn. These are the markers of a biologically diverse ecosystem in which we may not be able to see all flora and fauna outright, but they are there hiding in plain sight. 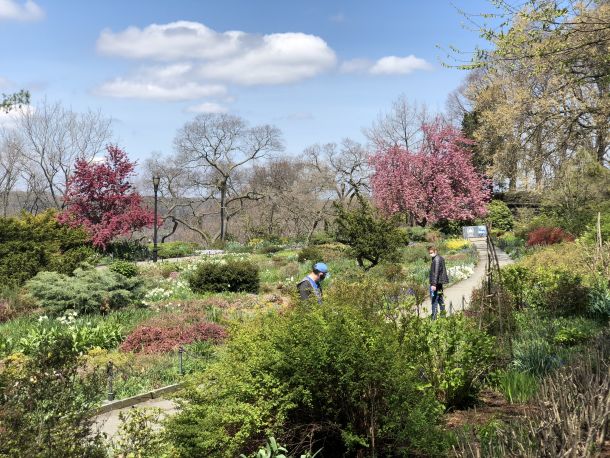 “There are many studies about the ability of the natural world to heal anxiety by focusing our attention on the beauty of our trees, birds and gardens,” Dr. Day said. “At this time of the coronavirus, when we are anxious about our health and the health of those we love, and whether we will have money for food and shelter, a walk in the park or the woods or down a tree-shaded road can help reduce some of the stress we are experiencing in this difficult time.”

Most Manhattanites are unaware of the tenacity of the native flora and fauna that is just a train ride away. Marielle Anzelone is a botanist and urban ecologist who studies the way that people engage with nature in the five boroughs. “With media attention often focused on global environmental concerns, people have become distanced from the abundant nature outside their window,” Anzelone said. “The local has become the new frontier, exotic and unknown to its residents,” she said. 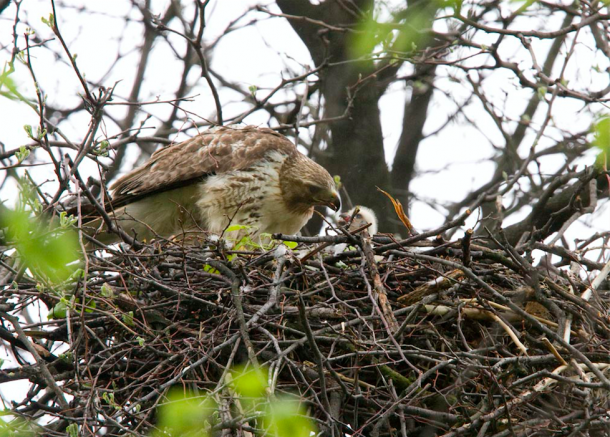 Cities are growing exponentially, with scientists projecting that by 2050, approximately 2/3 of the world’s population will be living in cities, according to The Nature Conservancy. This is an important feature when considering the fact that cities are places where manmade modernity and wildlife intersect.

New York City is home to more plant and animal species than Yellowstone National Park, and the world’s fastest animal—the Peregrine Falcon. Within New York City’s five boroughs exist lush urban jungles with many fruitful ecological surprises: red-tailed hawks keep dominion over the rodent population of Central Park, Monarch butterflies migrating north from Mexico are drawn to the fragrant wildflower beds of the Chelsea Highline Park, old growth forests can be found at Inwood Hill Park, native mussels thrive in the Hudson River estuary and even humpback whales have been spotted feeding off the Rockaway Peninsula.

This past August, scientists from the United States Forest Service identified a new species of beetle living in and around New York City. Preferring the European beach trees of Green-Wood Cemetery, the newly discovered jewel beetle has found a niche in one of the most densely populated, and developed regions in the world. Showing that even in areas that are heavily influenced by man, an abundance of ecological secrets can be hiding.

For the last decade, two major ecological studies have been conducted in Tucson, Arizona and Baltimore, Maryland to catalogue the various “hotspots” for biodiversity in urban ecosystems. 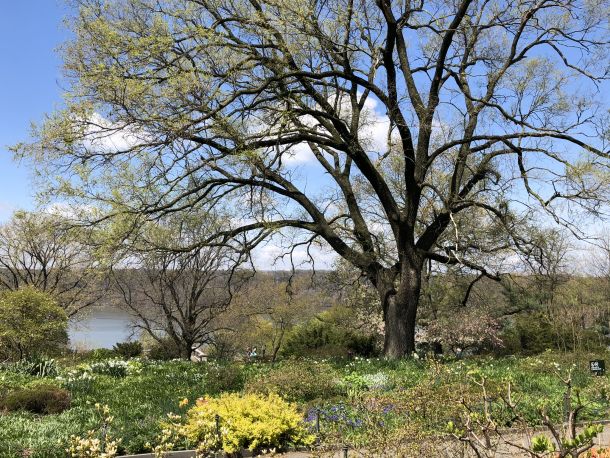 Similar research is being conducted in New York City. The New York Botanical Garden hosted the symposium: The Changing Nature of Nature in Cities, to explore the concept of novel ecosystems, largely the result of urban development. Panelists discussed if these stigmatized areas of unrestrained growth could be used to safeguard against environmental changes, as well as engaging urban dwellers about the wonders nature can hold.

Emma Marris, an environmental journalist and author of Rambunctious Garden: Saving Nature in a Post-Wild World, was a speaker at the symposium. Marris has experimented with the concept of “small nature,” focusing on micro-details of urban settings in her blog Everyday Nature to show the vitality that urban ecosystems can have. She urges us to expand our definition of nature to not only include pristine wilderness but also the spontaneous flora sprouting up in urban spaces.

“Ecosystems even without human intervention are not static…novel ecosystems in the city can exist by the sides of roads, and on top of abandoned railway lines, take Philadelphia’s partially elevated railway, the Redding Viaduct: the spontaneous vegetation up there was fantastically diverse, the colors were gorgeous, I saw a woodchuck, butterflies, and lots of pollination and exuberance,” Marris said. 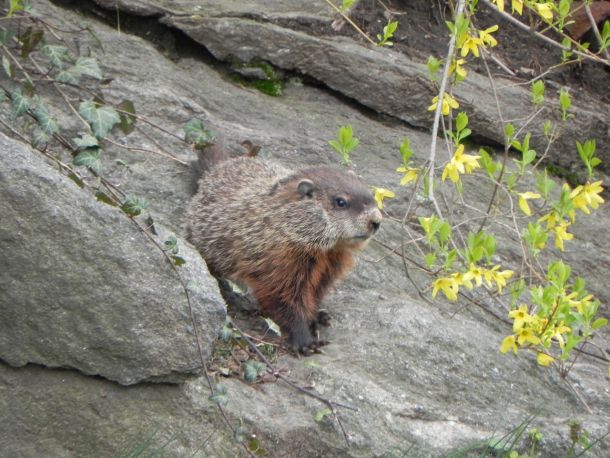 “I feel like we are getting to a place culturally where people can see spontaneous vegetation on an elevated abandoned railroad, and we are having less and less problems seeing that as beautiful and wild, and I think we should capitalize on that aesthetic shift and realize that on some level we may have more wilderness here around us in New York City than someone who is living in the heart of Yellowstone,” she said at the New York Botanical Garden symposium.

Urban jungle may seem like a contradictory turn of phrase, especially in a place like New York City where the cacophony of traffic, horns, and dense foot traffic is constant. However, to Dr. Leslie Day and Emma Marris, the parks and city streets of New York City are teeming with life. 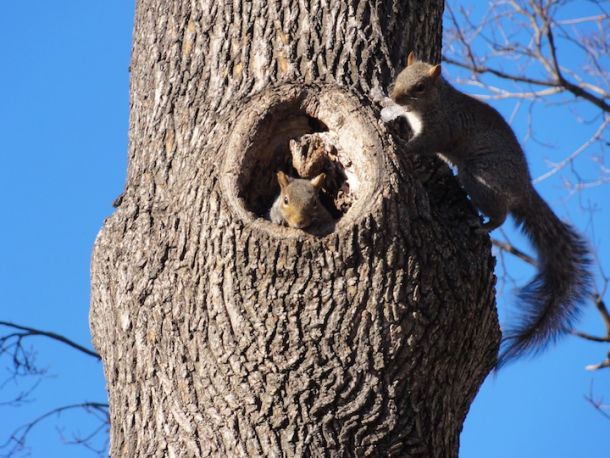 The California Academy of Sciences opened people’s eyes to the biodiversity that exists within their own hometowns and cities with the creation of iNaturalist. Accessible via website or mobile app, iNaturalist is a citizen science project and online social network of naturalists, citizen scientists, and biologists built on the concept of mapping and sharing observations of biodiversity across the globe. The “City Nature Challenge” was organized by iNaturalist, and has proven that there can be great concentrations of biodiversity hiding within a city.

In April 2017, as part of the City Nature Challenge held in New York City, iNaturalist users made thousands of new observations. “In just five days, we added 3,792 new observations to our city’s total, which was about a 28% increase over what had been added to NYC for the previous seven years,” wrote iNaturalist user Kelly O’Donnell. “We had an almost ten-fold increase in the number of people using iNaturalist compared to the same five days as last year (third highest increase for the 16 cities) and a sixty-fold increase in the number of observations made for the same time. New users and seasoned pros came together to enrich the list of NYC iNaturalist species. Together we added 163 new species to our list.” 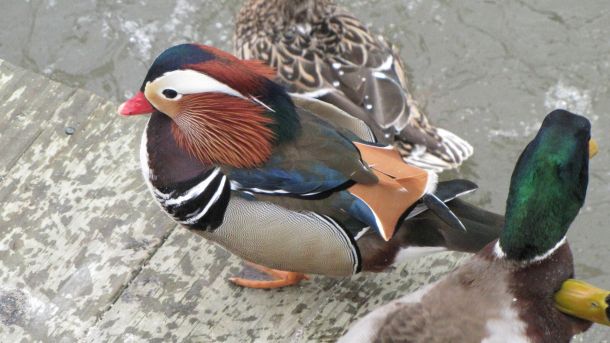 In light of the current COVID-19 epidemic, iNaturalist is urging users to work together on the City Nature Challenge while remaining apart. The CNC is no longer a competition between cities of the world. Instead, iNaturalist is focusing on the healing power of nature, encouraging users to observe nature in their backyards or outside their windows. 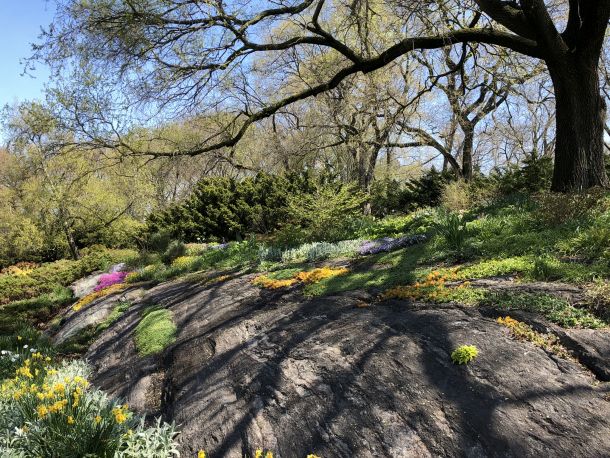 With more than 1,700 parks across New York City, there has never been a better time to observe and explore nature in your local neighborhood. When you are getting fresh air and communing with nature it is important to practice proper social distancing techniques and to be respectful of others. One park that blends the modern urban landscape with the natural world is the airy Highline Park in Chelsea.

Its planting design is inspired by the self-seeded landscape that overtook much of the railroad tracks after trains stopped running in the 1980s. The park today draws on these origins. There are 300 species of perennials, shrubs, grasses, and trees that have been incorporated into the design, as well as some of the previous species, which were present before the park was remodeled. These species were all chosen for their hardiness, adaptability, diversity, and seasonal variation in color and texture,” according to Friends of the Highline’s former Director of Horitculture, Andi Pettis. Since the park’s opening in 2009, millions of humans and non-humans alike have flocked to its walkways.

“When the park first opened, almost immediately the monarchs found us on their migration route south to Mexico, and we saw lots of butterflies and larvae,” said Pettis. “Other wildlife too, we saw praying mantis, aphids, and then of course the natural predators of aphids, so because the plant life is so diverse it really created habitat for a very diverse population of wildlife,” she said. 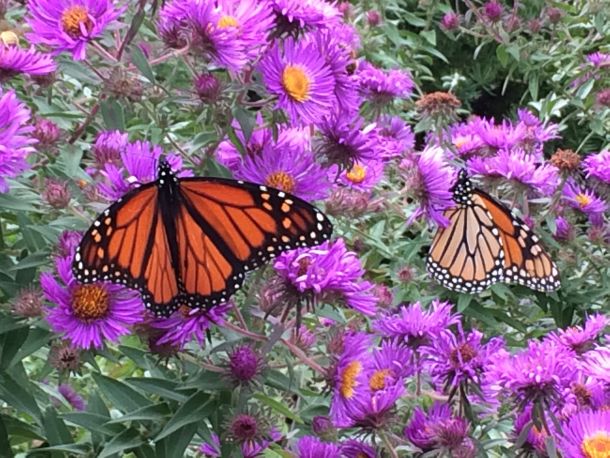 Like Central Park, the Highline is characterized as a “designer ecosystem,” a manmade system that could potentially perform better than purely natural systems, according to Marris.

“So the new thing here is maybe using the techniques of landscape architecture in places labeled as “nature” or “wilderness.” But it is all semantics, no? The plants and animals don’t know if they are in a park or an arboretum or a federal designated wilderness. They just live,” Marris said in an interview. 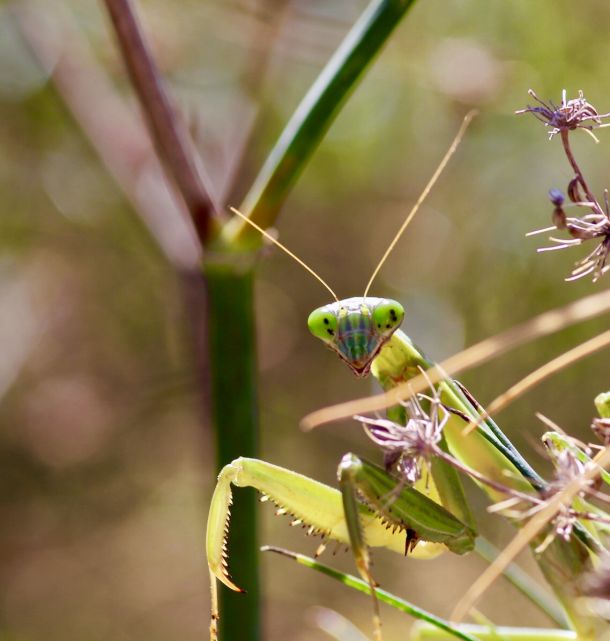 Eight miles uptown, at the northernmost part of Manhattan exists 500 acres of city parkland. “We attract so many birds because there is a cornucopia of food for them—so whether they are insectivores, fruit eaters or herbivores—there are tremendous amounts of berries and herbaceous plants for birds and all the insects that feed on them,” Day said. “Some invasive species, like the porcelain berry vine, smother and kill trees, but most plants, native, and non-native are of value to animal species. Humans built up this environment with concrete above ground and pipes below, and the plants that can survive are usually the ones that are the hardiest.” 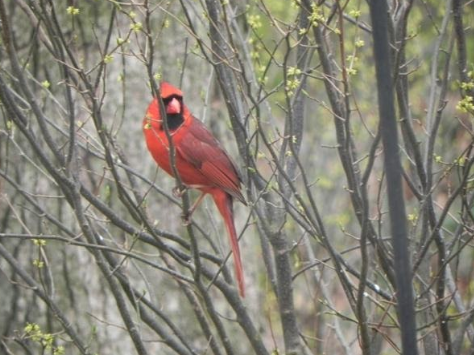 The Long Term Environmental Research Network sites in Baltimore, Maryland and Phoenix, Arizona have also been particularly fruitful in their research on urban ecosystems. In Baltimore, research indicates that levels of plant species diversity were similar among urban and rural areas. Suggesting that urban environments are not ecologically deserted places, but actually possess significant biodiversity. In Phoenix similar research is being conducted by the citizen science initiative, Salt River Project, to monitor the conservation of the McDowell Mountain Preserve. The Salt River Project hopes that the data collected will inform management decisions for the large, popular, and growing urban park.

“There is a great hope in this city, and cities in general,” Dr. Day said. “Cities in the past have been birthplaces for environmental movements. Starting in the late 1800s the City Beautiful Movement began in the major American cities, and the country’s first public park, Central Park, opened to all people as a place of beauty and recreation. The modern day Million Trees NYC movement and the conservationists in city neighborhoods since the mid 19th century collectively feel that they have the power to do something,” she said.