Jellyfish: Jellyfish and sea jellies are the informal common names given to the medusa-phase of certain gelatinous members of the subphylum Medusozoa, a major part of the phylum Cnidaria.

Jellyfish include any planktonic marine member of the class Scyphozoa (phylum Cnidaria), which is a group of invertebrate animals composed of about 200 described species, or of the class Cubozoa, which is approximately 20 species.

Are brains over-rated? After all, jellyfish lack them, yet carry out sophisticated functions and a complex reproductive cycle. Their lack of a nervous system control center even confers some advantages, such as the ability to lose a chunk here and there with little harm done. 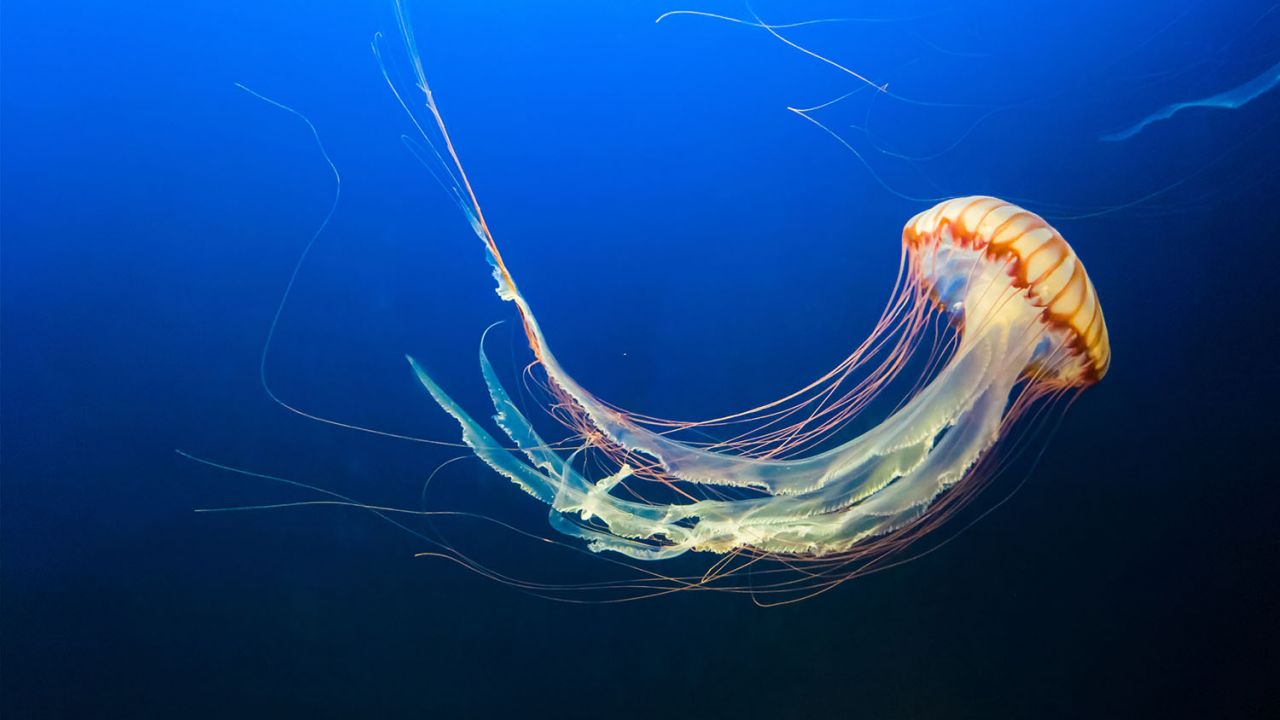 Most animals have some sort of centralized nerve center, aka a brain, although many have only simple versions called ganglia – concentrations of nerves that control other nerves around them. Jellyfish have no such central place; in fact, they have two nervous systems. A large nerve net controls swimming and a small nerve net controls all other behaviors, including feeding and spasm response (briefly curling into a ball). This body-wide network of small nerves somehow makes it possible for a jelly to figure out where the different parts of its body are and to act accordingly – for example, using a single tentacle to move prey to its mouth.

The large nerve net includes rhopalia, finger‐like structures on the edge of the jellyfish’s bell. These contain crystals that give jellies a sense of up and down, much like those in our inner ear, and a small pigment spot that may sense light, chemicals, or some combination of the two. Each rhopalium helps coordinate the pulsing motion of normal swimming and, not surprisingly, are mostly located near swimming muscles.

“Jellies are like the original computer networks, with little servers all along the margin of their body that they use cooperatively,” says Rebecca Helm, a researcher at Woods Hole Oceanographic Institute. “They have a net of cooperative nerve bundles that talk to each other and some pockets of centralized nerves, but no master controller. That’s nice when, say, a sea turtle bites off part of the bell. That isn’t the end of everything, because jellyfish can lose some of those servers. It can function with, say, seven rhopalia rather than eight.”

Scientists can only speculate why jellyfish didn’t evolve a central nerve center or brain. “Their ancestors branched off to one side of the tree of life, so it could be that evolution of a centralized nervous system occurred really early on the branch humans are on, but jellyfish kind of got stuck,” says Helm. She recently published a paper pulling together information on the evolution and development of Scyphozoans, the taxonomic class that includes jellyfish most familiar to beach-goers, including moon jellies, sea nettles and lion’s manes.

Their simple nervous system has served jellyfish just fine, Helm points out. Box jellies, for example, manage a courtship and mating behavior that includes a female catching a male in her tentacles and eating a sperm packet that the male spits up. Many jellyfish have circadian or daily rhythms, which mean they behave differently during day and night. “Fly one to Tokyo and it would get jet lag just like we do,” Helm says.

With this seemingly primitive nervous system, one part of a jellyfish body can be aware of, and respond to, the needs of another part.

“I think sometimes people use its lack of a brain to treat a jellyfish in ways we wouldn’t treat another animal,” Helm says. “There are robots in South Korea that drag around the bay and suck in jellyfish and shred them alive. I’m a biologist and sometimes sacrifice animals, but I try to be humane about it. We don’t know what they are feeling, but they certainly have aversion to things that cause them harm; try to snip a tentacle and they will swim away very vigorously. Sure, they don’t have brains, but I don’t think that is an excuse to put them through a blender.”

Perhaps brains are over-rated and it may be worth remembering that though they lack a brain, jellies still have nerves.