Philip Dalton and Matthew Gordon, the producers of “Spy in the Wild 2”, answered viewers’ questions in an Ask Me Anything (AMA) on Reddit. For the second series, the team created more than 50 realistic animatronic spy creatures and went around the world from the tropics to the poles to capture one-of-a-kind wildlife moments. They answered questions about how the robots work, what they discovered, and more.

The second episode of “Spy in the Wild 2” premieres on Wednesday, May 6, on PBS at 8/7c (check local listings). You can catch the first episode HERE or on the PBS Video app. 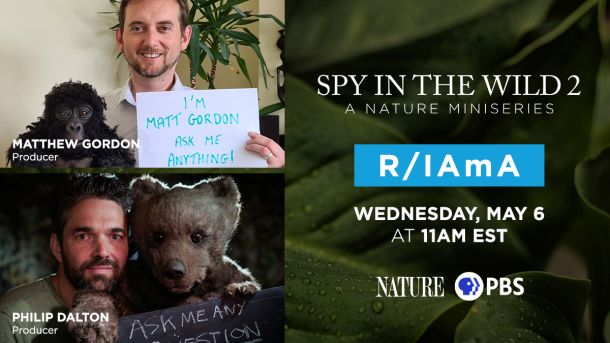 Q: So crazy that you created more than 50 of these things! How long does it take to create one? What’s the process?

Matt: This can vary depending on the complexity of each spy creature. However, I would say the average was about 2-3 months from the initial concept, drawings, talking about the specifications needed, then building the animatronics, putting the skin on it, and then finally punching the fur in.

Q: Did you name any of the robots!? What was the trickiest part of working with the robots in the wild?

Matt: Not this time, but in the previous series, we did name Spy Orangutan Dr. Birute after the scientist we worked with. Normally we call them by their official spy name.

To answer your other questions. Each environment brings its own difficulties as you can imagine. Walking through a hot, humid, dense jungle with a big spy creature makes filming a lot harder but at the same time animals that are difficult to find and are nervous about humans adds another complexity. So filming sea otters in Alaska was quite difficult as not only did our spy creature have to be waterproof, but we had to be sometimes over 1km away and we had to deal with small icebergs interfering with our transmitter signals.

Phil: Spy creatures need a lot of care and attention and keeping them in good working order can be hard work, especially after many weeks of filming in the wildness. The trickiest robot for me was spy polar bear. This was life-size, for every deployment into the frozen arctic sea we had to use the boats crane to lift in and out of the water. It was very heavy, especially when wet. The cold conditions made it more of a challenge to keep the electronics all working. 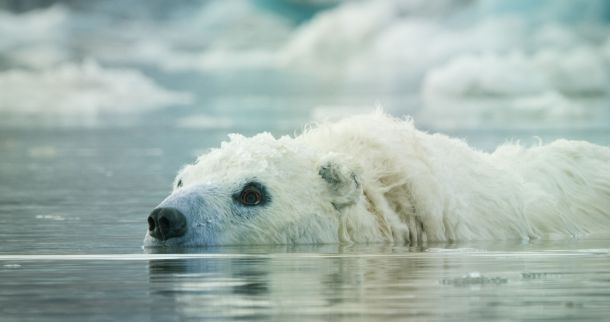 Q: How much do animals change their behavior around a “spy” cam vs. a normal camera? Is it really all that different?

The reaction of the animals to our spies does vary depending on the type of animal we are filming. But most animals are very curious at first, they will carefully inspect the spy, often sniffing first. But they quickly work out the spy is not a threat or food. That’s when they relax and the spy becomes very much part of the scenery. It’s at that point we get very interesting behavior, being so close to the animals means we end up filming extraordinary detailed behavior and sound. It’s very different from the long lens filming, spy creatures create a more intimate experience for the viewing. Of course, sometimes the animals will try to communicate with our spies, that’s when we often film quite unexpected behavior.

Q: Are you two involved in controlling the spy creatures? Which one is the most difficult to control? How do you position the shot?

Matt: Yes, on some shoots, we would control the spy creatures. Some of them are quite complex, like the Spy Gorilla, and so it needs 2 people to control it. But where possible we often like to have the animatronics engineer, who is far more experienced at puppeteering than us, to produce the most realistic movement and facial expressions.

Q: Have you ever lost any spy creatures in the wild?

Phil: We’ve always been able to retrieve our spy creatures after filming. There was one occasion in the series when our spy pig was dismantled by a fighting pair of male Komodo dragons. It came back home to the UK in many pieces.

Q: Was one environment harder or easier over others for the robots?

— Each environment brings its own difficulties as you can imagine. Walking through a hot, humid, dense jungle with a big spy creature makes filming a lot harder but at the same time animals that are difficult to find and are nervous about humans adds another complexity. So filming sea otters in Alaska was quite difficult as not only did our spy creature have to be waterproof, but we had to be sometimes over 1km away and we had to deal with small icebergs interfering with our transmitter signals.

— Probably the most challenging environment is operating on or in water. Spy creatures need extra design features to ensure they don’t spring a leak and malfunction. Problems can arise in strong currents in rivers and seas. But our design team are very inventive and are great at overcoming many of these problems. Spy salmon required many months of development to get it to swim upriver to film grizzly bears feeding on the salmon run. It moved and powered through the water just like a real fish. Fortunately, it did not taste like a real fish so it managed to survive intact.

Q: Is there a spy creature that you were most excited about using in the field? And is there an animal that you hope to build in the future?

Matt: My personal favorites were probably the Spy Gorilla and Spy Jaguar Cub. Both are very different animals and therefore could potentially react in very different ways. With jaguars you are filming an ultimate predator and so seeing how a jaguar in the wild was going to react to our Spy Jaguar cub was very exciting. When Spy Cub was deployed this great predator suddenly for a brief moment looked just like a domestic cat who was inquisitive about this novel Spy Jaguar Cub. At the same time, with mountain gorillas, there were many who wondered whether the silverback would accept our Spy Gorilla near the troop but as you saw in our footage, he did accept the Spy Gorilla and we got some incredible footage here:

Phil: Spy bear cub was exciting, we knew we were entering into risky territory with grizzly bears. Spy bear was designed to be able to roll away from trouble and had many facial movements to mimic the behaviour of a playful bear cub. Its teddy bear looks worked, the adult grizzly bears accepted Spybear and the younger cubs tried to play with him. Spy bear was able to sit shoulder to shoulder with grizzly bears without coming to harm while filming the bears feasting on the salmon run. Something no wildlife camera operator would dare to do. Working with spy bear was great fun!

Q: How many hours of footage do you capture to make an episode like this?

Phil: Over 8500 hours of material shot. For every hour-long program, 2,125 hours were actually shot as the many cameras waited for the elusive moments shown in the film.

Matt: Every series we often wonder this ourselves. We’ve got a new and exciting project which I think will definitely feature our biggest spy creature yet! Stay tuned!