In the aftermath of a hurricane where trees, earth and structures are swept away, it is hard to imagine an animal as small as an ant surviving. However, that’s just what fire ants were able to do in the wake of Hurricane Florence and Harvey. A single fire ant would easily drown in the flood waters, but clusters of 100,000 fire ants are capable of creating water-repellent life boats that can float for weeks on end without drowning the ants. Ants use “swarm intelligence” or collective intelligence that allows them to solve complex problems such as finding the closest food source, creating complex tunnel systems within their nests and even banding together to create rafts to ensure survival of the colony. Similar to human-designed infrastructure systems, insect systems must continue to operate in the face of a multitude of threats including natural disasters, breakdowns in the transportation network, and even outbreaks of disease.

In the natural world there are many species that are able to find broadly-useful solutions to difficult problems allowing them to adapt more readily to changing environments. Jamais Cascio is a futurist who covers the intersection of emerging technologies and cultural transformation, focusing on the importance of long-term, systemic thinking. He believes we can learn valuable lessons in resilience from nature as we move forward and adapt for the future. In ecology, resilience is defined as the capacity of an ecosystem to respond to a disturbance by resisting damage and recovering quickly. The takeaways from the natural world are relevant as humanity is faced with the unprecedented COVID-19 pandemic.

Over the past 100 years, the pace with which animal-borne pathogens have jumped from animals to humans has increased rapidly, leading some observers to call for drastic changes in the way humans interact with the natural environment.

“To prevent future outbreaks like COVID-19 or worse, we have to treat planetary, animal and human health as inseparable. This will require radical changes to business as usual. To date, we’ve operated under the fallacies that medicine and ecology can be understood independently and that the conditions that impact the animal kingdom are separate from those that impact humans,” wrote Viveca Morris, executive director of the Law, Ethics & Animals Program at Yale Law School.

The wildlife trade has been a source of emerging infectious diseases likely for as long as it has existed, according to wildlife criminologist, Monique Sosnowski. Researchers examining over 1400 human pathogens determined that approximately 60% were known to be zoonotic – or originating in animals. These include a number of well-known globally present diseases, such as HIV, which has been linked to the consumption of non-human primates; Ebola hemorrhagic fever, which was traced to great apes consumed for food; and SARS-associated coronavirus, which has been tied to the trade in carnivores.

Colin Poole, a Regional Director for WCS (Wildlife Conservation Society) called for an end to the consumption of wild animals: “To prevent future viral outbreaks such as COVID-19 that impact human health, well-being, economies, and security on a global scale, governments worldwide need to support policies that stop all commercial trade in wildlife for human consumption—particularly of birds and mammals—and close all such wildlife markets.”

In our present situation, Cascio began thinking about what a more resilient world might look like. Humans have built global systems that work best when everything is running with predictable regularity Cascio explained. Infrastructure is highly specialized for the economic and social environment, but when that environment changes, these specialized structures often do not have the capacity to easily adapt, said Cascio. However, resilient systems are optimized for uncharted waters with rogue waves. Further examples of resilience can be found in the natural world.

Cascio was reminded of population biology and the theory of r and K. Although r-and K-selection theory has been modified over time, the concept was one of the first predictive models for life-history evolution. The theory states that r strategists are categorized as generalists, which are fast-reproducing and able to change ecosystems without too much perturbation, said Cascio. Some examples of organisms that exhibit r-selected traits include ants, rats and frogs. K strategists on the other hand are specialists, are slow reproducing (with high investment in a small number or singular offspring), and are heavily adapted to their biome. Species that exhibit K-selected traits include gorillas, eagles and whales.

Many organisms fit into both r and K categories and adopt different strategies depending on local conditions at any one time. Some researchers believe that an organism capable of alternating between these two strategies may be the most successful organism in the long term because of its ability to adapt and survive under a much broader range of conditions. Humans seem to fall into both categories.

“Humans are great at adaptation. We’re the ultimate generalists. But we tend to build our economic and social structures in specialized ways, because that’s how they work best, when everything is okay,” said Cascio. “Simply put, when a particular biome flourishes, K strategists can dominate; when that biome changes or is disrupted, r strategists dominate and K strategists get hammered. We’ve built a very heavily K strategy society; when disruption hits, we’re hard-pressed to adapt quickly. We need to build more “r” back into our system.”

A dynamic “r” species that is able to adapt without too much upheaval are ants. As a collective, ant colonies are capable of forming highly efficient and complex networks, according to Jurgen Kurths a mathematician at Potsdam Institute for Climate Impact Research. These complex networks are something we find in many natural and social systems, yet ant colonies are capable of preserving their highly structured social networks despite potentially drastic changes in their environments. They are able to do this through swarm intelligence, a trait found throughout nature that is now being used to transform various fields including medicine. Ants are social animals that work together to make better decisions. A solitary ant can only perform a limited range of activities. However, an ant colony is capable of finding highly efficient solutions to difficult problems and can adapt automatically to changing environments, such as building a massive ant raft during hurricane flooding that ultimately saves the collective. During times of crisis and calm ants as a colony are capable of incredible feats.

One of the unexpected outcomes of the COVID-19 crisis has been the way the natural environment is benefitting from the pandemic. For instance, the Himalayas are now visible from more than 100 miles away due to the reduced air pollution caused by the country’s COVID-19 lockdown. However, one Twitter user who posted the photo believes the view is also representative of what humanity stands to lose. 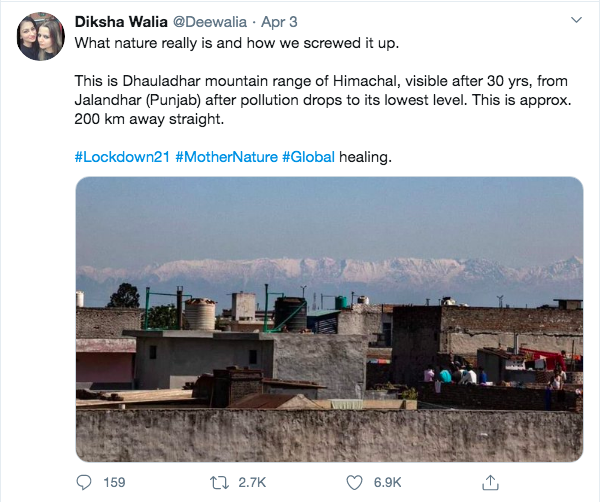 “Here’s an analogy: you get used to the smells of the kitchen when you’ve been cooking something with a lot of garlic, and your nose starts to ignore the odor,” explained Cascio. “But if you leave the house for a few hours, when you come back into the kitchen you’re overwhelmed by the garlic smell. I think we’ve all (to varying degrees) gotten used to what we’ve been doing to the planet, and a return to that stink will be shocking to a lot of people.”

After observing the NASA satellite images which showed a massive reduction in air pollution over China, Stanford Earth-system science professor, Marshall Burke decided to calculate the health benefits of air pollution changes wrought by economic disruption. His results revealed that a pandemic-related decrease in PM2.5—the most deadly of air pollutants—likely saved the lives of 4,000 children under 5 and 73,000 adults over 70 in China over the course of two months this year. Although Burke stated that these results do not account for the many other short or long term negative social and economic consequences of COVID-19, his calculations provide food for thought.

“The calculation is perhaps a useful reminder of the often-hidden health consequences of the status quo, i.e. the substantial costs that our current way of doing things exacts on our health and livelihood,” Burke concluded via his co-blog G-Feed. 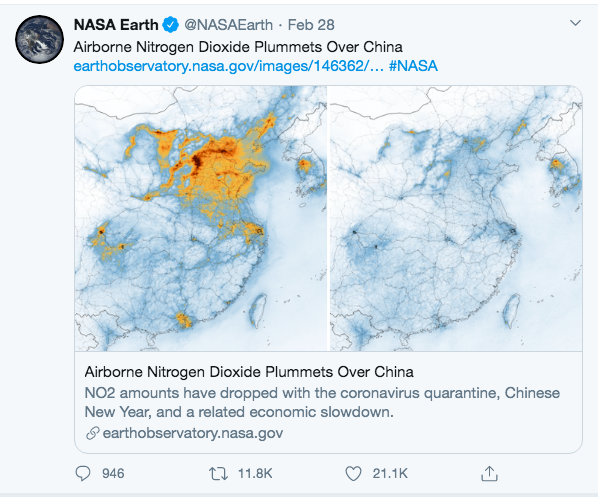 PM2.5 Plummets over China via NASA Earth on Twitter

“One unexpected consequence of this pandemic is that, in terms of the environment, we got a glimpse of what we could have, if we only try,” said Cascio.