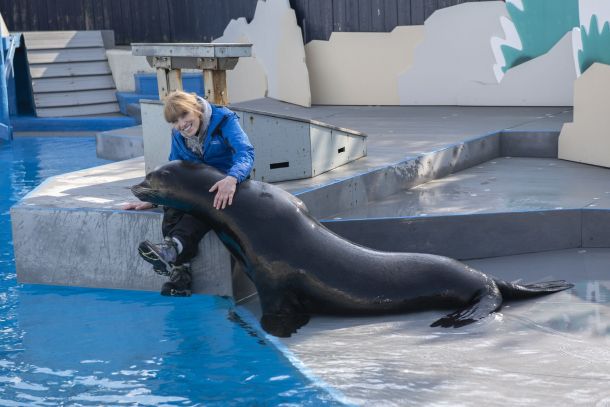 Martha and Bruiser, a 550-pound 11-year-old California sea lion, in a relaxed moment at the side of the pool. Photo credit: Julie Larsen Maher ©WCS.

On a recent evening as I was leaving my job, I stopped to check on the sea lions. Our 3-year olds were mock-fighting, a type of play essential for social animals who will one day need those skills to achieve dominance.

They chased and splashed, thrusting out their chests, and opening their mouths as if to roar—but they were silent. Nearby lay 600-pound Osborn. If the two juveniles vocalized, Osborn would open one eye—and they would be silent again.  It reminded me of when I was a child, fighting with my siblings. We knew our parents would not tolerate it, so we kept our squabbling at a whisper.

I try to avoid anthropomorphizing. It is one of the things I learned from my first mentor, Alysoun Seacat. In the 1980s, Alysoun was one of the few women in a leadership position in the marine mammal training profession. I had volunteered at the Aquarium for six months when she offered me a job. 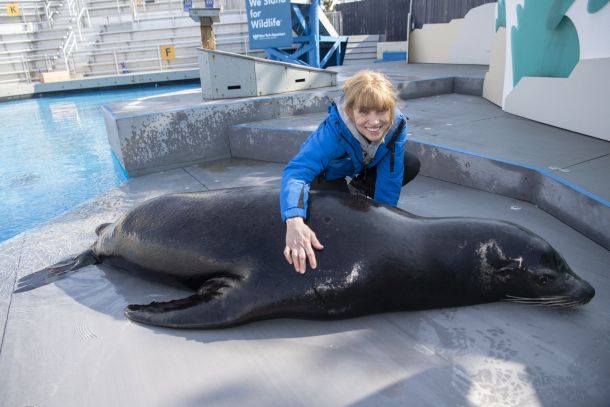 Bruiser getting a back rub. This kind of physical contact enables trainers and veterinarians to examine and treat animals at the aquarium. Photo credit: Julie Larsen Maher ©WCS.

Alysoun cautioned me, “Male trainers say women are emotional and physically weak, so you need to work twice as hard. The animals must always come first, no matter what. You are always on call. And you can never be emotional around the animals or talk about them as if they are human. Don’t blow it for other women.”

Ours is now a female-dominated profession, but I have kept that advice in mind for the last 35 years. My job has been exciting and filled with opportunity. I have worked with sea lions, fur seals, grey and harbor seals, walruses, and penguins. I have traveled around the world to help rescue wild animals or bring them into breeding populations. 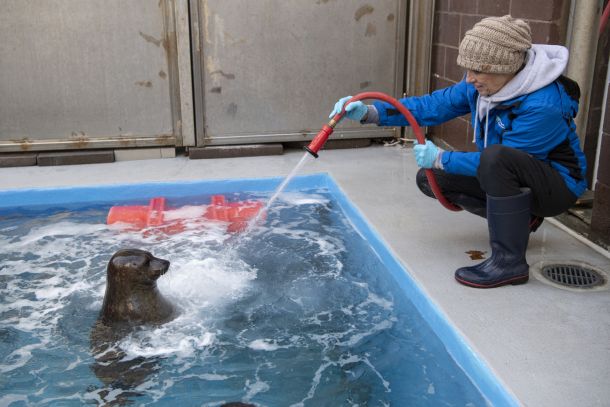 Martha uses toys and play as reward for trained behaviors. Here she plays with Sidney, a harbor seal that was orphaned on the West Coast and came to the New York Aquarium in 2020. Photo credit: Julie Larsen Maher ©WCS.

In 2012, I went to the Alaska Sea Life Center. They had recently rescued two walrus calves, both likely orphaned as a result of the devastating effects of climate change and human encroachment—a challenge WCS works to mitigate. There I met 12-week old Mitik. WCS veterinarian Dr. Robert Moore and I flew with him to New York.

We gave Mitik round-the-clock care, including a great deal of stimulating “enrichment.” Just as a walrus calf needs milk to stay healthy, he also needs activities to keep him engaged physically and mentally. Mitik’s preferred enrichment was a large plastic tube, with holes drilled into it.  He would maneuver it onto his head and walk around barking, creating an echo. I made sure he had it when I sat with him the night Superstorm Sandy devastated the Aquarium.

As the water rose and I started to wonder if we would need to abandon the room, I concentrated on keeping Mitik comfortable and masking the stress I was feeling. Between our playful interactions and perhaps because he had already faced so many changes in his world, he seemed to regard the flooded room as just one more type of enrichment! 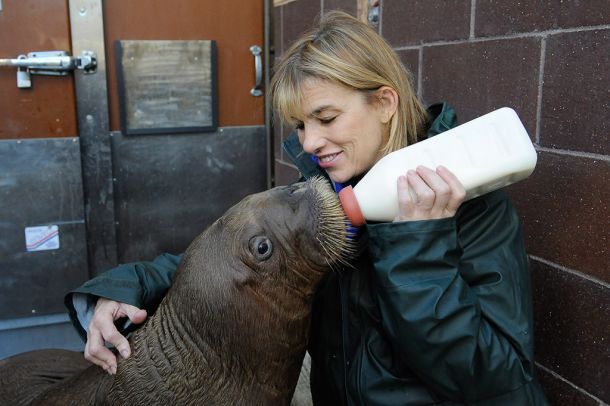 When the waters finally receded, two of my teammates, Kayla Jarnagin and Veronica Kolstadt, took over. A few hours later I returned, intending to begin restoring the room to pristine condition, but it was already spotless. Mitik was curled up with them. The months that followed were unforgettable, but that was the moment that will stay with me. We had put away emotion and done what that calf needed. The animals always come first—no matter what.

I have had the honor of working with extraordinary animals, in some cases knowing and loving them from the time they were babies until their last days.

There is a part of my work that is nearly impossible to convey and still gives me chills. When I look at one of our animals, they look back—not with the unconditional love of my dog, but as wild animals with lives of their own. I am just one part of their world. I hope that they view me as a significant part.