BOB ABERNETHY, anchor: We have a profile today of the great Irish flutist Sir James Galway, talking about what grounds his performances and his life. Bob Faw of NBC News has our report.

BOB FAW: In the sublime realm of the world’s premier flutist, from the rarefied excellence of the concert stage to a hip club on New York’s Lower East Side, in this stunning confluence of technical virtuosity and the dazzling, sometimes aching purity of sound, there is something more. 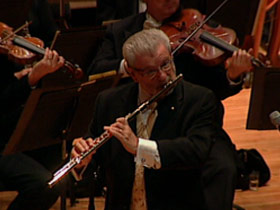 FAW: That reference to the biblical parable of the talents isn’t the only thing unusual about this artist who plays to packed houses throughout the world…

FAW: … whose master classes attract only the most gifted and who, wherever he goes, rarely fails to wear a cross. Galway insists it is not a fashion statement. 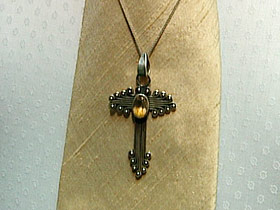 Sir JAMES: It’s a sign of what I believe in, and what — when I put it on every day I think about the crucifixion. I don’t just put it on. It’s not jewelry. It’s something that reminds me of what I should be doing and how I should be behaving.

FAW: Which helps explain why, before every performance, such as this one with his wife Jeannie, there is prayer.

Sir JAMES (praying with wife Jeannie): Heavenly Father, we thank you for this talent that you have given us, and we ask you to let us demonstrate it to the best of our abilities tonight with the orchestra. We ask you to bless our concert and bless our audience. In Jesus’ name. Amen.

FAW: Sir James Galway giving thanks not just for the talent he has been given, but also, he makes clear, to the giver of that gift.

Sir JAMES: I ask God to get me in the spirit, let me get into the spirit of the evening and to do the best, and to walk in His ways to make Him proud that I would be doing this. I mean, this is what I believe and what I do.

FAW: Now 68, Galway is a long way from the poor Belfast neighborhood where he grew up and turned his back on his local church because it wasn’t, he says, working class enough. A Protestant, these days he visits churches wherever he’s performing, making sure not to wander into one that is “informal.” 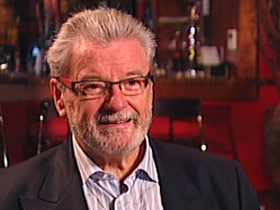 Sir JAMES: To this day, I don’t like a happy-clappy bit.

Sir JAMES: Yeah, bring a guitar, play in the band

FAW: But make no mistake, this is no hide-bound, strait-laced Puritan. For one thing, as he delightedly tells audiences, there are all those remarkable flutes.

Sir JAMES: (speaking to audience during performance) This one happens to be completely made of gold, keys and all.

FAW: There is also, in addition to all that virtuosity, an irrepressible sense of humor.

Sir JAMES: (speaking to audience during performance). The whole concerto opens up like this (plays flute) for about 10 minutes. So that’s the only reason I bought this flute, and it is for sale. 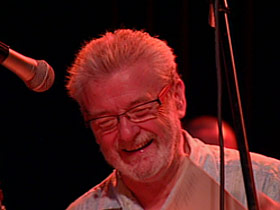 FAW: For Sir James Galway, there’s a time for merriment and a time, even in rehearsal, when the good times are put on hold, and the taskmaster takes over.

Sir JAMES (speaking to wife): Jeannie, I’d like to get my rehearsal done here. So if you could talk outside please, if you don’t mind.

FAW: It’s a steely determination tempered by his faith, revealed again when he and his wife talk to a young cancer patient.

FAW: All of it, the tenderness, the showmanship, the toughness — all part of the same fabric of a life lived, profoundly religious 24/7.

Sir JAMES: What do we do? We go to church once a week. That’s about it. I mean, we should be really on the ball, doing it all the time.

FAW: So there should be no surprise when, in most concerts, before Galway plays “Danny Boy” he urges listeners to do something different.

Sir JAMES (speaking to audience): To me, it is like a prayer, the music. So if you feel like praying, go ahead feel free to pray along. You know what happens if you don’t pray? Nothing. So don’t take the chance. And I think you’ve got plenty to pray for. 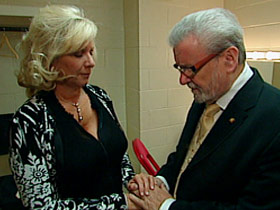 FAW: Praying, then, as he and his wife will do when the concert ends.

Sir JAMES: We always thank God after a concert. Maybe it’s the next day, because you get caught up in everything, you know. But it’s always something I’m very grateful that happened.

FAW: And you thank?

FAW: So the next time you hear this pied piper, remember there is more here than just music or talent.

Sir JAMES: I think personally that I play better now than I did before.

Sir JAMES: Well, because of my beliefs, and because of the way that I center things and what I do.

FAW: And if how he plays brings listeners happiness, even joy, James Galway will tell you there’s a reason for that.

(to Galway): Is the source of that the music? Or do you think it’s God?

Sir JAMES: I don’t know. I don’t know. I would think it’s because of my connection with a higher power that the people feel this, and I think that’s what the attraction is.

FAW: A connection with something greater in a life that has been a parable, indeed.

Sir JAMES: So I know that whatever we do, we are blessed anyway. I mean, look at me, this little guy from the working class of Belfast ending up like this. It’s quite a story.

FAW: Sir James Galway, in perfect harmony with his music, and within. For RELIGION & ETHICS NEWSWEEKLY, this is Bob Faw in New York.