A rare conviction, an upcoming murder trial and other major updates in police shooting cases this week

There were developments in three prominent fatal police shooting cases this week. Here’s a rundown of what happened, and what’s next for the families and officers involved.

A rare conviction in the shooting of Jordan Edwards 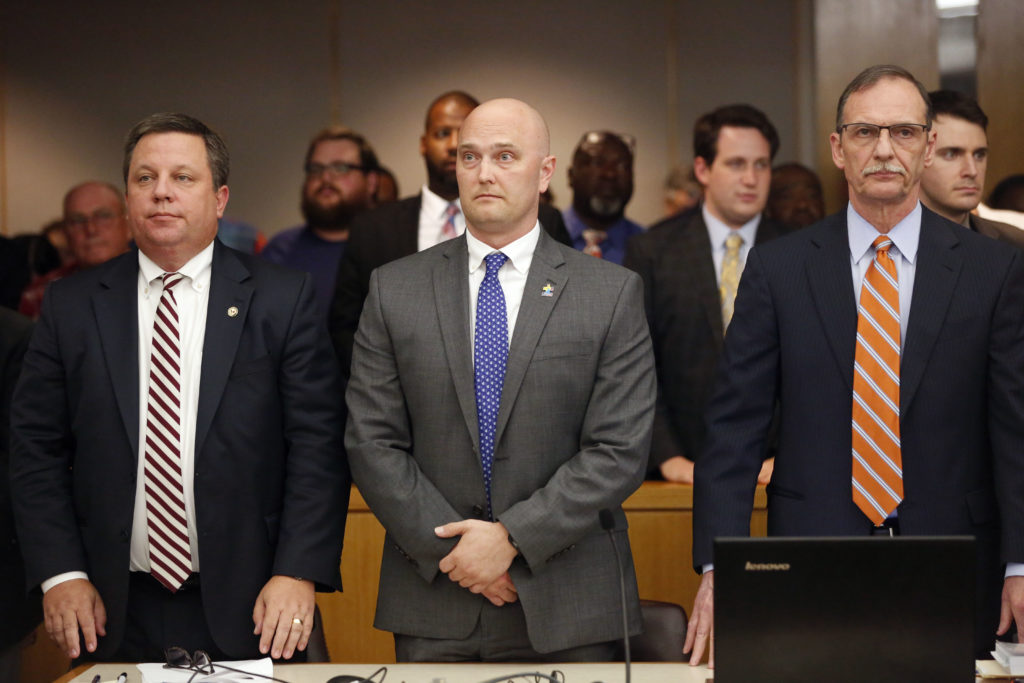 Fired Balch Springs police officer Roy Oliver (C) and attorneys Miles Brissette (L) and Bob Gill (R) stand before the reading of the verdict in the trial of Oliver, who was charged with the murder of 15-year-old Jordan Edwards. Photo by Rose Baca/Getty Images

Original incident: On April 29, 2017, Jordan Edwards, 15, was fatally shot by a Texas police officer who fired multiple times into a car full of teenagers leaving a house party.

The officer, Roy Oliver, and his partner were responding to a 911 report of an unruly house party. Oliver shot fives times into the moving car and Edwards was struck in the back of the head. Oliver has maintained that he opened fire into the car because the vehicle was moving toward his partner. After reviewing body camera footage, police officials said the video contradicted Oliver’s version of events; the car was moving away from his partner. Investigators later confirmed that no weapons were found in the vehicle.

Months after the incident, a grand jury indicted Oliver on a murder charge and four additional counts of aggravated assault, one for each of the other teens inside the car at the time of the deadly encounter.

The latest: After a trial and about 15 hours of deliberation, a Dallas County jury found the former officer guilty in Edwards’ death. The following day, the jury sentenced Oliver to 15 years in prison for the killing. (Prosecutors had wanted a sentence of at least 60 years.)

Yamiche Alcindor talks to activist Brittany Packnett and Philip Stinson of Bowling Green State University about the developments in the Edwards’ case.

On-duty officers fatally shoot someone 1,000 times a year, Stinson said. Between 2005 and April 2017, when the study was released, 82 officers were charged with murder or manslaughter in connection with an on-duty shooting.

What’s next: While members of Edwards’ family welcome the jury’s decision, some felt the sentence was too lenient for the crime.

After the trial and sentencing, the Dallas Police Association said Oliver was held accountable for his actions, the Associated Press reported.

“What was accomplished this week was accountability,” the group’s president told the AP. 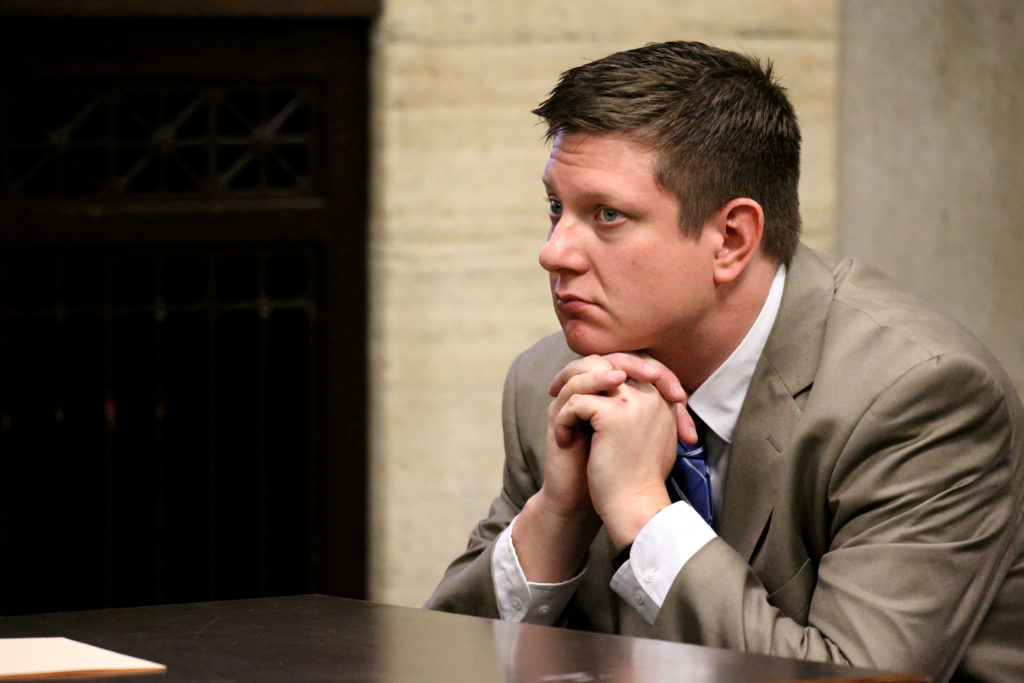 Chicago police officer Jason Van Dyke listens during his 2017 hearing in his shooting case of Laquan McDonald at the Leighton Criminal Court Building in Chicago, Illinois. Photo by Antonio Perez/Chicago Tribune via Reuters

Once dashcam video of the deadly encounter, released 13 months later via court order, shows McDonald holding a knife as several police cars arrive at the scene. Van Dyke is seen shooting McDonald within seconds of exiting his squad car.

Initial police reports said the black teen was moving toward the officers. But the video shows McDonald walking away. Police also initially said that McDonald continued to try to get up, weapon still in hand, after being shot, but the video does not appear to show that, either. (McDonald was shot a total of 16 times).

The video’s release, in November 2015, prompted weeks of protests. Van Dyke was charged that month with first-degree murder in McDonald’s death. Three officers were also indicted last year for their involvement in covering up the shooting. And the incident has prompted reforms within the Chicago Police Department as well.

The latest: In an interview with the Chicago Tribune at his attorney’s office this week, Van Dyke spoke for the first time since the shooting occurred. While Van Dyke declined to talk directly about the shooting, he suggested that the murder charge against him is political.

He also blamed social media for creating a “great false narrative” about him.

“Everyone wants to be part of the bandwagon of hatred. Anyone who knows me, knows me personally, knows … that I’m not a racist,” he told the newspaper.

Soon after, prosecutors filed documents to try to hold Van Dyke in contempt of court, saying he violated a judge’s “decorum order,” which bars law enforcement employees involved in the shooting case to comment outside the courtroom.

Van Dyke’s defense team pushed back on this request as well as another request for Van Dyke to be jailed, arguing the officer didn’t comment substantially on the case, the Tribune reported. A judge will decide whether to hold Van Dyke in contempt Saturday.

What’s next: Van Dyke faces six counts of first-degree murder in his murder trial, which begins next week, along with 16 additional counts of aggravated battery with a firearm — one for each shot fired at McDonald.

Jury selection for the trial is scheduled to begin Wednesday.

Chicago 5 pointed out that Van Dyke remains with the Chicago Police Department. A department spokesperson told the local TV station that he is suspended until the jury in the criminal case reaches a verdict. 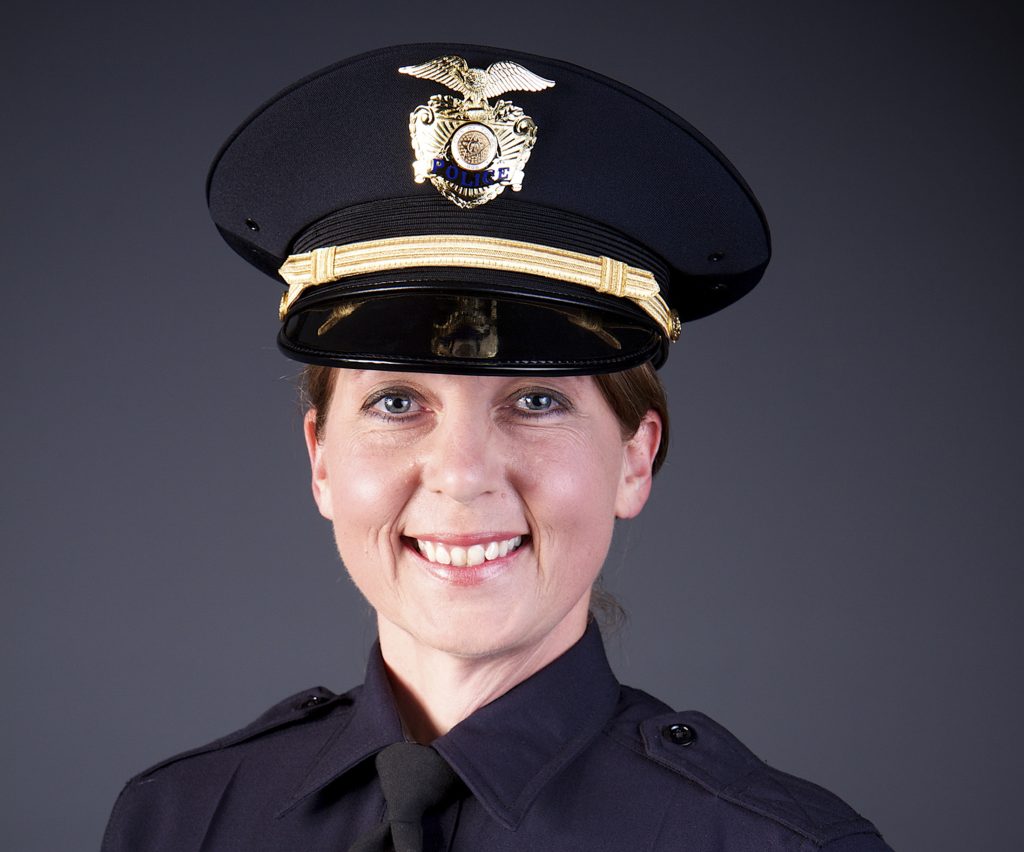 Shelby testified in court that Crutcher refused to comply with her commands and that she at one point believed Crutcher was attempting to reach for a weapon inside his SUV. She shot Crutcher once; it was a fatal shot. Authorities later said no weapon was found in the vehicle.

A jury acquitted Shelby of first-degree manslaughter last year. The jury wrote a letter that said jurors were not “comfortable with the concept of Betty Shelby being blameless,” adding that they questioned why the officer didn’t use alternative forms of force to de-escalate the situation.

Months after her acquittal, Shelby resigned from the police department and eventually became a deputy in a nearby county.

After the trial, Crutcher’s family filed a civil lawsuit against Shelby and the city of Tulsa, saying the officer used excessive force against an unarmed man and also alleging biased policing by the city. City councilors approved paying for Shelby’s legal representation in the case, Tulsa World reported.

The latest: This week, Shelby began teaching a class that deals “with the aftermath of a critical incident such as an Officer involved shooting,” according to a description on the Tulsa County Sheriff’s Office website.

Shelby told “Good Morning America” that the class — titled “Surviving the Aftermath of a Critical Incident” — addresses the “challenges that I face after my critical incident.” Shelby said it was an unpaid position and that the first class was done last year.

“So, I take what I learned and developed what I call tools and I pass that on to other officers so maybe they can be better prepared to deal with a critical incident,” she added.

News of the class drew local protests in the downtown area.

Your thoughts? Groups gathered in protest after learning that Betty Shelby, a former police officer acquitted of manslaughter in the death of Terrence Crutcher, will teach a course on the aftermath of an officer-involved shooting. https://t.co/kAjEw5IQUn pic.twitter.com/TWDP7EXuDM

Marq Lewis, a demonstrator, told ABC News that the class was “tone deaf,” adding, “they’re saying to us, ‘It’s fine, deal with it. We don’t care how insensitive it is. We’re going to have this class and it’s OK.'”

What’s next: Shelby continued her class this week, despite the protests.

A former policeman was found guilty of killing a black teen. Why is conviction so rare?