What Ken Cuccinelli brings to Trump’s hardline push on immigration

President Donald Trump’s selection of former Virginia Attorney General Ken Cuccinelli to head U.S. Citizenship and Immigration Services has added another senior-level immigration hardliner to the administration — the latest move by the president to surround himself with more people who share his views on who should enter the country and what’s happening at the southern border.

The president chose Kevin McAleenan, who as commissioner of Customs and Border Protection oversaw the Trump administration’s practice of separating migrant children from their families, as acting head of the Department of Homeland Security in April. McAleenan replaced Kirstjen Nielsen, with whom Trump had reportedly lost favor after she pushed back against some of his more extreme ideas.

The personnel changes appear to be translating into policy changes, many of them aimed at curbing the rise of asylum-seekers at the southern U.S. border.

Since Nielsen’s departure, Trump has proposed making migrants pay an asylum application fee and reducing the number of immigrants allowed into the country because of family ties. He has asked Congress for more money for border barriers. And Trump threatened Mexico with tariffs if it did not agree to step up its efforts to limit the number of migrants from Central America passing through Mexico on their way to the U.S., though he did not follow through on the threat after both countries announced they had reached a deal on immigration last week.

Now, Cuccinelli is replacing Lee Francis Cissna, an adviser to the 2016 Trump campaign who resigned from the job last month. Cissna, the son of an immigrant who has said “the immigrant experience has always been a fundamental part of my family life,” was well-liked by top Republicans such as Sen. Chuck Grassley, R-Iowa, and was instrumental in tightening U.S. immigration policy.

As USCIS director, Cuccinelli will head the Department of Homeland Security agency in charge of determining who can immigrate to the U.S. legally, including approving applications for temporary work visas and green cards. The agency’s officers are also the ones who determine whether asylum-seekers have “credible fear,” a key criteria migrants must meet to stay in the U.S. and obtain asylum status.

It is unclear what led to Cissna’s resignation, or what Cuccinelli can do to satisfy Trump and his advisers’ desire to crack down on immigration.

“For my money, they have done everything they could possibly do short of breaking the law,” said Leon Rodriguez, who led the customs and immigration services agency from 2013 to 2017.

Cuccinelli will need to determine how he fits into the administration’s immigration agenda. His record in public office and media appearances suggest he will likely push the White House toward more restrictions on immigration.

Cuccinelli was elected to the Virginia state senate in 2002 and won a race for state attorney general in 2010. He lost a bid for governor in 2013, and shortly thereafter became the head of the Senate Conservatives Fund, the political action committee founded by then-Sen. Jim DeMint, R-S.C.

Like Trump’s other picks for key administration jobs, Cuccinelli has publicly supported the president’s immigration policies and has proposed ways Trump could be more aggressive when trying to stem the flow of migrants into the U.S.

In a December op-ed in the Washington Examiner, Cuccinelli advocated for turning border security “entirely over to the military,” saying that adding enough troops could “almost completely shut down illegal border crossings” and would limit drug trafficking. 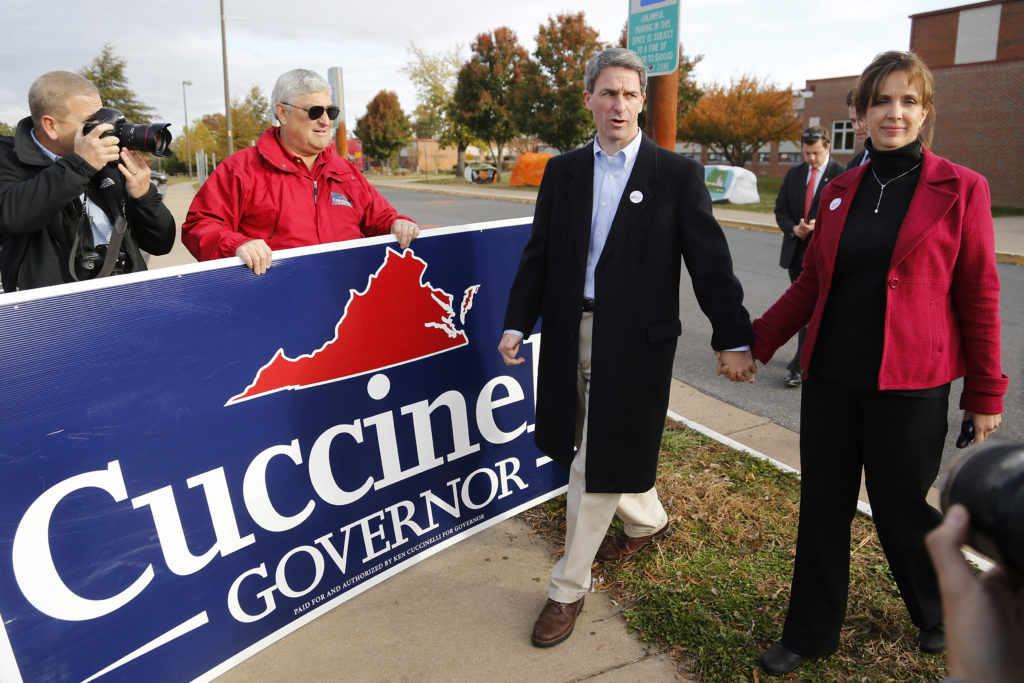 Ken Cuccinelli and his wife Teiro Cuccinelli depart after casting their ballots during Virginia’s gubernatorial race in 2013. During his unsuccessful bid for governor, Cuccinelli said he supported immigration reform, although he advocated strict immigration policies during most his time in public office. Photo by Jonathan Ernst/Reuters

Cuccinelli’s tough stance on immigration dates back to his days as a state senator. Then, he advocated for restricting birthright citizenship, namely by excluding people born to immigrants who came to the U.S. illegally. He also introduced legislation that would have allowed employers to fire workers who refused to speak English in the workplace.

As Virginia attorney general, Cuccinelli supported a state law that allowed police officers to question people about their immigration status during traffic stops. He also said so-called “Dreamers,” the children of immigrants who were brought to the U.S. illegally as children, were not eligible for in-state tuition at public universities, a policy his Democratic successor reversed.

Cuccinelli appeared to soften his approach to immigration during his unsuccessful run for Virginia governor in 2013, during which he supported comprehensive immigration reform.

In recent months, Cuccinelli has returned to a more hardline stance on immigration, notably as a regular guest on cable news networks.

Trump has often been impressed by people who regularly defend him on television. White House economic adviser Larry Kudlow, Morgan, Trump’s pick to head ICE, and Matthew Whitaker, who served as acting attorney general, often appeared on TV praising the president’s policies before they were tapped to become a part of his administration.

Cuccuinelli was not always a supporter of Trump. In 2016, Cuccinelli told the PBS NewsHour he did not think Trump was a conservative, though he added that he had “the most confidence” in Trump on immigration issues.

Immigration advocates who have tracked Cuccinelli’s views on immigration for years said his past views offered a window into how he might approach his new role.

In 2016, Cuccinelli told the PBS NewsHour he did not think Trump was a conservative, but added he had “the most confidence” in Trump on immigration.

“Having him be the head and face of USCIS does not give the immigrant community the welcome feel that America has historically been known for,” said Monica Sarmiento, the executive director of the Virginia Coalition for Immigrant Rights.

Those who have worked with Cuccinelli said he is a bona fide conservative but also brings a sense of humanity to the job that might surprise his critics.

“I think he will be very comfortable saying we need strong borders and to protect ourselves from those who are not supposed to be here, and still be incredibly compassionate toward the individuals that are detained,” said Chuck James, who served as Virginia’s chief deputy attorney general under Cuccinelli.

James added that Cuccinelli does not shy away from robust internal policy debates, and would carry out Trump’s policies even if he disagrees with them, as long as they are within the law.

What Cuccinelli could actually change

One of the key challenges Cuccinelli will face at USCIS is how to handle the growing number of asylum-seekers at the U.S.-Mexico border.

Trump has repeatedly advocated for tightening the asylum requirements as a way to reduce the asylum case backlog, which stood at 325,277 in January. Asylum cases can take anywhere from three months to several years to make their way through immigration courts. The president has also forced asylum seekers to stay in Mexico while awaiting their immigration hearings. 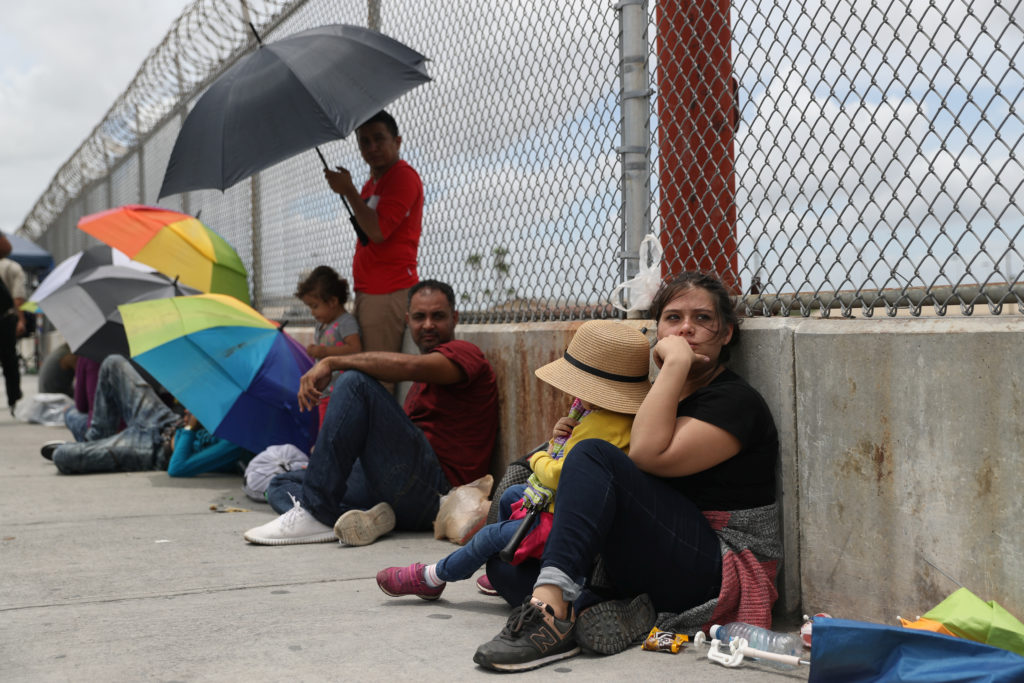 A Honduran mother and her 3-year-old daughter wait with fellow asylum seekers on the Mexican side of the Brownsville-Matamoros International Bridge after being denied entry by U.S. Customs and Border Protection officers near Brownsville, Texas, on June 24, 2018. The The Trump administration has ordered officials at the border to increase scrutiny of migrants claiming asylum in the U.S. Photo by Loren Elliott/Reuters

U.S. law requires the government to grant asylum to a migrant if they have a “well-founded fear of persecution on account of race, religion, nationality, membership in a particular social group, or political opinion.”

But USCIS officials are given discretion in determining what is a “well-founded fear.” If an agency officer does not think a person has met that criteria, they can deem the person ineligible for asylum. In that case, asylum-seekers are designated to be deported, though they can appeal the decision and plead their case before an immigration judge while awaiting removal from the country.

The Washington Post reported in May that the Trump administration ordered officers to more aggressively question asylum-seekers and highlight any inconsistencies in their testimony, which in theory could lead to fewer asylum claims being granted and more migrants being deported.

“The administration has done a tremendous amount to both try to deter asylum-seekers and make their path as bumpy and unpromising as they can,” said Rodriguez, the former USCIS director.

In a statement announcing his appointment to USCIS, Cuccinelli emphasized the need to “protect the integrity” of what he called “the most generous legal immigration system in the world.”

In a statement, Cuccinelli emphasized the need to “protect the integrity” of what he called “the most generous legal immigration system in the world.”

“I look forward to working with the men and women of USCIS to ensure our legal immigration system operates effectively and efficiently while deterring fraud and protecting the American people,” he said.

Emilio T. Gonzalez, a former USCIS director under President George W. Bush, said the agency should focus less on reducing the asylum case backlog and more on putting into place “positive barriers” to “root out fraud” and encourage the immigration of higher-skilled individuals.

“You have to make sure that the person you are naturalizing or giving a green card to is someone you want around forever,” he said. Gonzalez added that making sure the immigration process includes both caution and compassion is “the ultimate balancing act.”

When it comes to immigration programs for guest workers and permanent residents, Rodriguez said Cuccinelli could interpret agency rules in a way that would change some policies “around the margins” and make it more difficult for some people to have their applications approved. The Trump administration has already increased scrutiny of H-1B visas, for example.

But more fundamental reforms, such as Trump’s proposals to favor job skills over family ties when determining who is allowed into the U.S., go beyond the USCIS director’s authority and require legislative approval.

Some far-right immigration groups questioned how much more effective Cuccinelli could be than his predecessor.

“The White House is likely to be frustrated that he is not able to do that much more than Cissna was. That’s not a reflection on Cuccinelli. That’s just the nature of the beast,” said Mark Krikorian, the executive director of the Center for Immigration Studies.

Where Cuccinelli could make a difference, Krikorian said, is in appealing to Trump supporters. By putting someone with a consistently conservative record as the head of a key immigration agency, Trump has sent his base another clear message that he is doing all he can to secure the border, even as the number of migrants continues to grow.

Will U.S.-Mexico deal reduce immigration? A report from 2 borders