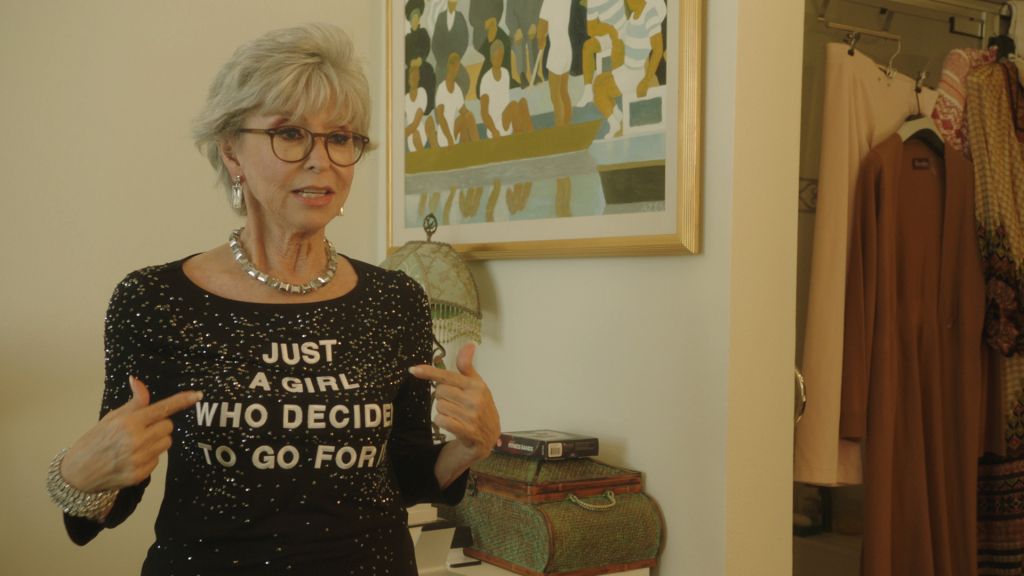 Over a career spanning more than 70 years, Rita Moreno defied her humble upbringing and relentless racism to become one of a select group who has won Emmy, Grammy, Oscar, and Tony Awards. Rita Moreno: Just a Girl Who Decided to Go For It explores Moreno’s path to stardom, revealing her talent and resilience as she broke barriers and paved the way for new generations of artists.

Directed by Mariem Pérez Riera, the film includes vérité footage of Moreno today, archival footage of her roles and appearances, reenactments of her childhood, animation, and interviews with Moreno, those close to her, and performers she influenced. Film interviewees include Gloria Estefan, Morgan Freeman, Mitzi Gaynor, Whoopi Goldberg, Eva Longoria, Justina Machado, Terrence McNally, Karen Olivo, as well as Norman Lear and Lin-Manuel Miranda, who are also executive producers on the project.

In the following interview, Moreno talks about the making of the documentary, shares stories of her early days in Hollywood, and more.

How did this documentary come about?

It all began when I was doing “One Day at a Time,” the brilliant reimagining of Norman Lear’s sitcom with a Cuban-American family. Brent Miller, one of the show’s producers, approached me and said he would love to produce a documentary on me. He said, “You’re fascinating, you’ve seen so much change in your lifetime.” Was I was open to the idea? The truth is I just wasn’t sure. When you commit to a project like this, it’s a huge change in your life. And I had seen my share of celebrity documentaries and wasn’t too crazy about them because they primarily seemed to be clip reels.

I gave it some more thought. I’ve written a memoir and did an autobiographical play, “Life Without Makeup.” I thought, “I can do this.” When I finally said yes nearly a year later, Norman Lear and Lin-Manuel Miranda immediately wanted to come on board. I knew I was in good hands.

What made you trust your life story to the filmmaker, Mariem Pérez Riera?

Once I agreed to do the film, the next step was finding a director. I wasn’t intimately involved in the process, but the one thing I did say is that the director has to be a woman, ideally a Hispanic woman. So, Brent and his team started looking for a director, and when it came time for the final presentations, I absolutely fell in love with Mariem’s vision for the film. She uses these beautiful, animated paper dolls to represent me as a child. I call her “Little Rosita.” These darling paper dolls appear throughout the film, not just in the scenes about my childhood, and they are layered with meaning. They’re Little Rosita, they’re my inner child, they’re the dutiful “good girl” so many women are taught and expected to be. I love Little Rosita, and boy does Mariem find the right picture to put on her face. Such a sad little face! The icing on the cake? Mariem is Puerto Rican!

Did you learn anything surprising about yourself after watching the film?

I was surprised by my willingness to share some very, very personal stuff. There were some difficult questions asked of me. But I promised myself that I would be as truthful as possible. Otherwise, what’s the point? I’m also amazed by how relevant and timely the film is. “This is not just the story of Rita Moreno, the actress,” Mariem has said. “It’s the story of every woman trying to assert herself in a world ruled by men.”

In the documentary, you talk about your lifelong love of the movies and how from a very early age you wanted to be a movie star. What was it like the first time you saw yourself up on a movie screen?

The first time I saw myself on a movie screen, I was disappointed because I didn’t look outrageously beautiful. It’s not that I looked ugly. It’s just that I had these funny notions of how you’re supposed to look when you’re in the movies. You’re supposed to look like Elizabeth Taylor, who was my idol. Guess what? I didn’t look like her. And my voice sounded very high, which indeed it was. So I was thrilled and at the same time, I was somewhat disappointed. But I thought, I can work on my voice. I can make that better.

You have said that “Singin’ in the Rain” was one of the most joyous experiences of your career. What are some of your favorite memories of working on that film?

I loved working on that film! I played Zelda Zanders. It was a small role, but I was thrilled because Zelda was a glamourous movie star – and a non-ethnic character. She wasn’t the “island girl” or any of the other stereotypical ethnic roles the studios typically offered me. It meant the world to me that Gene envisioned me in this fantastic little role and could see beyond my ethnicity and appreciate my talent. And I was thrilled to be in a Gene Kelly movie because I’d worshiped him all of my life. From the moment I could speak English, Gene Kelly was my hero.

I was on the set almost every day of that movie. Whenever I wasn’t in a scene, which was very often, I’d watch the rehearsals and filming. I was there when Gene did his big “Singin’ in the Rain” number with a terrible fever and cold water pouring down on him. I was there for the filming of “Make ‘Em Laugh” with Donald O’Connor, one of my favorite numbers in the movie. And that movie is so incredibly funny. “Dignity, always dignity!”

I got to take a trip down memory lane when I did “One Day at a Time” because Sony Pictures Studios, where the series was filmed, in its former life was the MGM Studios. One of the first things I did when I started working on “One Day at a Time” was visit Stage 15, where all those famous musical numbers were filmed. It certainly brought back some wonderful memories.

When you won the 1962 Oscar for your performance in “West Side Story,” you became the first Latina to win an Academy Award. What did it feel like to be making history?

It was an incredible honor. Anita was a role model for me. She had intelligence, dignity, and strength, and I love that she is inspiring a whole new generation of Hispanic performers all these years later. The true heartbreak came when I couldn’t get a job after winning the Oscar. They kept offering me gang movies. It broke my heart.

What was it like working on Steven Spielberg’s remake?

It was a very emotional experience. It was emotional meeting the new Anita, Ariana DeBose, who is marvelous in the movie. It was emotional watching these talented young dancers doing Justin Peck’s gorgeous choreography in rehearsals. I just adored “the kids,” as I call them. Every day at lunch, they’d gather around me and ask questions, which I was more than happy to answer. It was great fun and very uplifting.

What do you tell aspiring performers when they ask for your advice?

I tell them the most important thing they can do is complete their education. Be a well-rounded person. It’s not enough to just be a mechanical thing that dances when someone tells you to. If you really believe in your talent, persevere and don’t let anyone prevent you from focusing on what you want to do in life. I always believed in my talent, and in my early years in Hollywood, I couldn’t understand why I kept getting ignored so much. I finally understood that it had everything to do with my nationality, which was horribly depressing. But that’s how it was. So I would say perseverance is extremely important. There will be rejection – this is a difficult, often heartbreaking business – but it doesn’t mean you don’t have what it takes. It just means it’s not your time yet.

At the Kennedy Center Honors, the actress Gina Rodriguez presented a “love letter” to you, thanking you for being her inspiration. If you could write a love letter to Rita Moreno, what would it say?

I would say, “Good for you, girl! You achieved much of what you needed and wanted.” Notice how I didn’t say I achieved everything I set out to do? I’m not done yet!