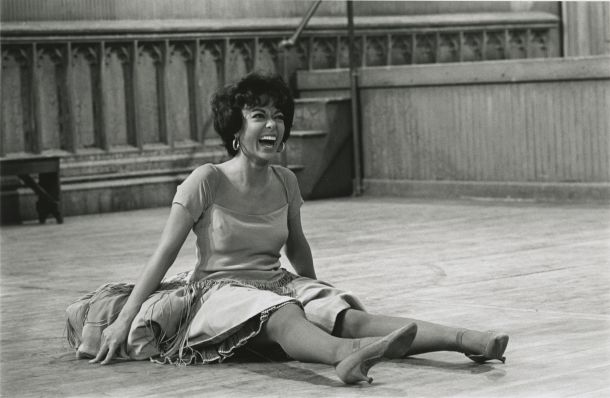 Movie adaptations of Broadway musicals veer wildly in their fidelity to the original source; some are extremely faithful (South Pacific, Fiddler on the Roof), others take a more liberal stance—the film of Cabaret entirely replaced its original subplot with a completely new one and cut half the score.  That’s okay: the film adaptation of 1954’s Fanny cut all the songs.

In the multiple Academy Award-winning 1961 film of West Side Story—which is, by and large, pretty faithful to the stage version—there’s one tiny addition to the original number “America,” but it’s so memorable and so resonant that it nearly necessitates a complete re-framing of the song.

Before Rita Moreno—in her Oscar-winning performance as Anita—launches into her lyrical paean to the charms of urban America, she sings, “I like the isle of Manhattan” and her friend, Consuelo, played by Yvonne Othon, comments in mellifluous Nuyorican:  “I know you do-oo!” This line was not in the original show nor on the original cast album and yet every subsequent recording of Leonard Bernstein and Stephen Sondheim’s score includes it—including an archival studio recording conducted by Bernstein himself in 1984.  The line is a wonderfully sassy acknowledgement of Anita’s overly enthusiastic buy-in to the American Dream and it’s rendered by Othon with a weary cynicism:  she’s clearly heard all this before.

But in the original number, as rendered four years earlier on-stage, “America” isn’t so much about the ambivalence of the American Dream; it’s centered around promoting America’s charms at the expense of Puerto Rico’s poverty.  According to lyricist Sondheim, the number was supposed to be an argument between Anita and her boyfriend, Bernardo, as a way of giving their relationship some added dimension.  But the show’s director/choreographer/co-conceiver Jerome Robbins wanted a musical number that featured only women—there were already too many dancing and jumping boys—in this case, the girlfriends of the Sharks.  “The character of Rosalia was invented to take Bernardo’s point of view,” wrote Sondheim in his memoirs, and that point of view was naively pro-Puerto Rican.  Rosalia doesn’t figure in the plot (she was originally played by Marilyn Cooper, a Jewish comedian and dancer from the Bronx who would go on to a long Broadway career); “[I]n fact,” wrote Sondheim, “because Rosalia is a nonentity, the stage version make Anita something of a smartass.”

The back-and-forth in the lyrics between Rosalia and Anita (called “stichomythia” back in Ancient Greek days) sets up a pattern: Rosalia sings nostalgically about her home country, while Anita denigrates it, most significantly at the top of the number, when she turns the island of “tropical breezes” into “Puerto Rico, you ugly island, island of tropic diseases.” This begins a four-minute-and-32 second smackdown of Puerto Rico, set to some of Bernstein’s most vibrant dance music.  (According to Sondheim, Bernstein claimed that, while on vacation in Puerto Rico, he came across a wonderful dance rhythm called the Huapango—it turns out it was a melody Bernstein composed years earlier, put away in his trunk, and wanted to re-use.)

Even if Bernstein didn’t discover the music on a vacation to Puerto Rico—even if he never went on vacation to Puerto Rico—it bears mention that none of the creative team, which includes bookwriter Arthur Laurents, did much, if any, research on Puerto Rico itself.  Sondheim himself admitted he had never even met a Puerto Rican when he took on the writing assignment.  It all goes back to what Lin-Manuel Miranda refers to in the musical Hamilton:  who tells your story?

Nonetheless, “America,” which was initially choreographed not by Robbins but by Peter Gennaro, his co-choreographer, became a highlight of the show, vibrantly rendered on the best-selling cast album by Cooper and Chita Rivera, a performer of Puerto Rican, Scottish and Italian descent, who was born in Washington, DC.  When the film version of West Side Story was announced, Moreno, who was born in Puerto Rico, was keen to get the part of Anita and was one of the first actors cast.  But there was a problem:  “I wanted this part so badly, so badly. But a few weeks after I got it, I suddenly remembered that lyric [from ‘America’],” she told the Hollywood Reporter.  “Nobody knows this, but I said, ‘Those words won’t come out of my mouth.’ I was going to give it up on principle, not because I was brave — but because I couldn’t bear the thought of doing this to my people.”

Moreno wasn’t the first to object.  On September 29, 1957, three days after the musical’s Broadway opening, Howard Rusk, a pioneering doctor and the founder of the Institute of Medical Rehabilitation at New York University, wrote a piece for the New York Times:  “The reference to ‘island of tropic diseases’ is a blow below the belt.  This is not based on fact.  Puerto Rico has no significant disease problem related to its tropical climate…The Commonwealth of Puerto Rico has made tremendous strides forward in public health . . .Mr. Sondheim’s lyrics will probably remain unchanged and Puerto Rico’s mortality rates will continue to decline.”

But when cameras rolled at Hollywood’s Goldwyn Studios in October of 1960 to film “America” (the first song in the movie to be shot in a studio rather than on the New York City location), Mr. Sondheim’s lyrics were in fact changed.  Again, according to Sondheim, the reason was that Robbins wanted to rethink the number and refocus it on the relationship between Anita and Bernardo.  Rosalia is removed from the song entirely, Consuelo gets her two seconds of fame in her place, and the group number becomes infused with a dueling sexuality between the Shark gang members and their girlfriends.

It’s unclear who asked for the lyric changes—Robbins, Moreno, or the studio executives—but still, the song’s ethos is centered around Anita’s disdain for the “backward” island of Puerto Rico.  The revised lyrics have Anita singing, “Puerto Rico, my heart’s devotion, let it sink back in the ocean.”  From Moreno’s perspective, this lyric, too, “really clings to people’s hearts. It still does.  But they completely disregard that it’s one native’s point of view, which is why the number turns into a song that’s really insulting America.”  During the course of the movie version, Anita projects her rose-colored version of her adopted country, while the men refute that vision with world-weary irony:  “Life is all right in America,” she sings and they reply “If you’re all-white in America!”  In this way, the film version adopts the trope of countless plays, films, and musicals (Flower Drum Song, Ragtime, even Hamilton) that, for immigrants, even if in the American Dream the streets are paved with gold, you do have to bend over to pick it up; not everything is as golden as it seems.

Subsequent stage productions (which include hundreds of thousands of high school productions) of West Side Story include the original 1957 lyrics because to embrace the revised movie lyrics would require a total re-conception of the number and, consequently, the show itself.  Which version the highly anticipated 2021 Steven Spielberg film remake (also featuring Moreno) will use is, for now, an open question.  But the number “America” still has the thrilling rhythm of Bernstein’s music, the irony of Sondheim’s lyrics, and the terpsichorean frenzy of Robbins’s choreography.  When you hear those percussive claves knock out the five syncopated beats that begin “America,” don’t you feel like rustling your literal or figurative skirt—just a little?

I know you do.

Gregory Peck: A Conversation with Gregory Peck
Quincy Jones: In the Pocket
Gene Kelly: Anatomy of a Dancer
Billie Holiday: The Long Night of Lady Day
Johnny Carson: King of Late Night
John Cage: I have Nothing to Say and I'm Saying It