Social-distancing protocols, work-from-home mandates, and widespread travel restrictions have left the majority of us confined to our homes—and craving a connection to the natural world. Despite the collective global anxiety surrounding Covid-19, spring has arrived in the Northern Hemisphere. It is one of nature’s greatest performances, a time of rebirth, renewed energy and dramatic transformations. 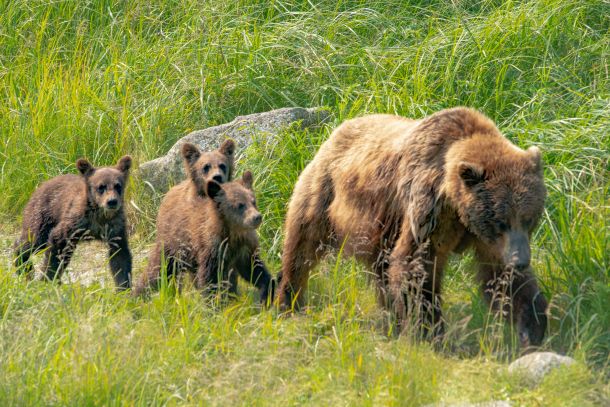 In their endless search for food, a mother brown bear leads her three cubs through the long grasses of the Chilkat River, Alaska. Photo by Michael Ryan Clark.

Across the United States, buds of trees are beginning to burst open after a winter of dormancy, monarch butterflies are migrating North, and bears are emerging from hibernation. Even in New York City, a city ravaged by the epidemic, the uplifting call of the Northern cardinal permeates the quiet April days. While tension is evident on every street corner, the natural beauty of cherry blossom and Callery pear trees can also be seen.

“Nature throws a party every year, and it’s called spring. It is the most active time in the natural world for plants and animals, from birth and rebirth to migrations to pollination,” said Nature executive producer Fred Kaufman. With this in mind why not witness springtime phenomena from the comfort of your couch? These wildlife programs and webcams give a refreshing glimpse into the lives of animals that emerge from their winter dwellings to celebrate spring. 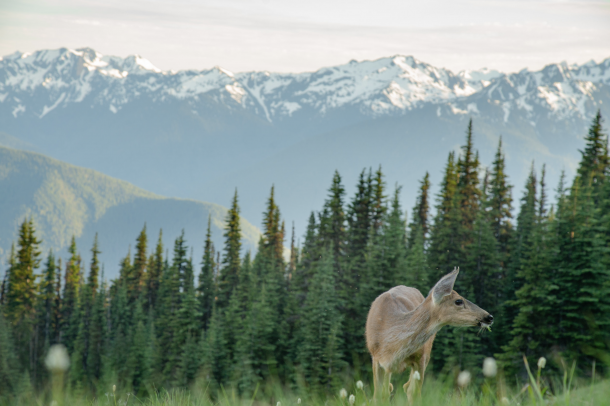 A blacktail deer forages in a subalpine meadow beneath the peaks of Olympic National Park. Photo by Michael Ryan Clark. 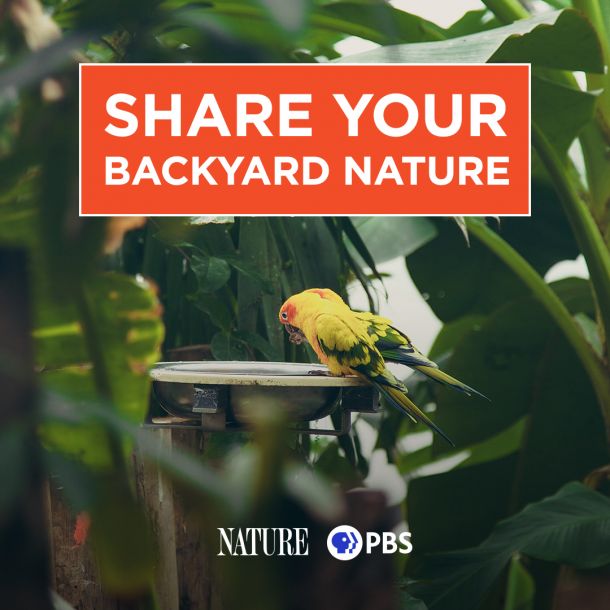 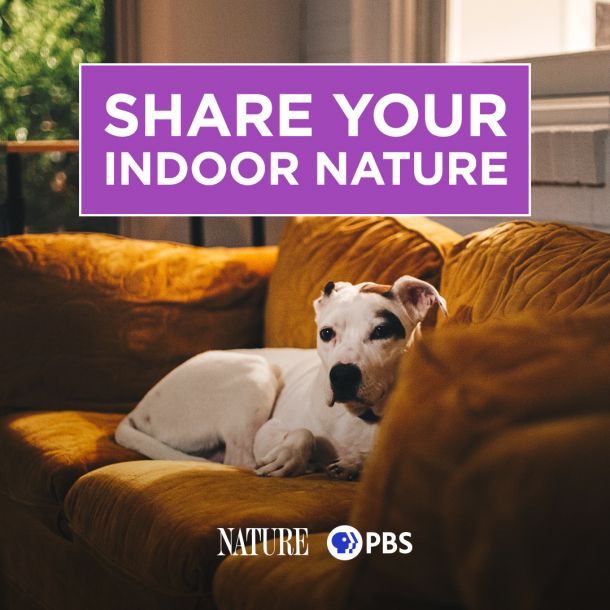 Here’s a project for everyone: share your #backyardnature or #indoornature with us on Facebook. Although we’re social distancing, you can still appreciate and connect with nature from your home! 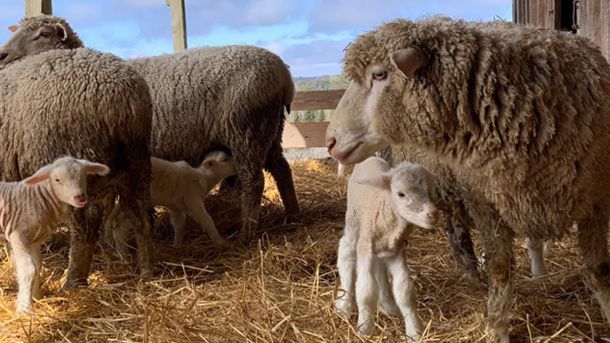 Watch the green wave as it sweeps across the continent in spring: rising temperatures and longer days spur plants to awaken and flower, and animals to seek out newly abundant resources for their new families. Watch the full episode via PBS.org.

Although Monterey Bay Aquarium may be closed, its 10 wildlife cams allow online visitors the opportunity to explore the aquarium’s vast animal habitats remotely. The Sea Otter Program team also has the chance to introduce online audiences to its stranded sea otter pups that are normally not on public display from 10:00am to 10:00pm Pacific time. The Aquarium operates a sea otter surrogacy program in which resident animals are paired with orphaned pups to provide maternal care and teach them skills needed to survive in the wild. Female sea otters give birth to one pup and usually have their first pup at the age of four or five. Their pregnancies last four to five months. Pups can be born any time of year, but in California most are born between January and March. 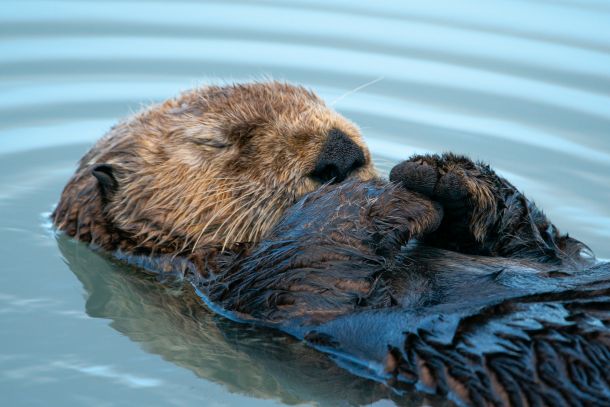 A sea otter sleeps in the calm waters of the Valdez Harbor, Alaska. Photo by Michael Ryan Clark.

Watch a live cam of a female hummingbird chick as she takes in her surroundings from the comfort of her nest. This hummingbird cam sits in the branches of a ficus tree in La Verne, California where hummingbirds have been nesting for years. This hummingbird chick, nicknamed “Tess” has just reached 23 days old according to the Explore.org “Fledge Watch” community. Members of this community are hopeful that she will take flight any day now! “Tess is now 23 days old and looking very curious about what awaits beyond her cozy nest. Hummingbird chicks are ready to leave their nest at 23-28 days from hatch,” one commenter wrote.

And if you’re looking for more bird action, check out this livestream from the Stewards of the Upper Mississippi River Refuge. The stream features three bald eagles, who are almost always in frame!

While cultural institutions have closed their doors to help flatten the curve, The New York Botanical Garden’s virtual gates are wide open. The NYBG is allowing online visitors a chance to welcome the spring with views of its 250 acres. On their website, you can take a spring walk among the daffodils, cherry trees, magnolias and even re-experience the first day of spring. You can even watch an in-depth virtual tour of The Orchid Show: Jeff Leatham’s Kaleidoscope, featuring Marc Hachadourian, NYBG’s Director of Glasshouse Collections and Senior Orchid Curator. For those looking to develop a green thumb of their own, there are online classes ranging from intro to plant science to rooftop gardening.

From mid-February to May, eastern North Pacific gray whales can be seen migrating northward along the west coast of the United States. Thanks to Whale Watching Center in Depoe Bay and the Oregon State Parks’ YouTube Channel, online audiences have a front row seat to whale-watching season in the Pacific Northwest every Tuesday, Wednesday, and Thursday, from 10am to 2pm Pacific time. Don’t miss the gray whale’s 12-ft high blowhole sprays and acrobatic leaps off the Oregon coast as they migrate to their feeding grounds in Alaska. For those interested in learning more, there are even live commentators who recount recent sightings and answer questions from the audience.

Most brown bears spend the winter hibernating in dens, during which time their bodies drop in temperature, pulse rate, and respiration. Brown bears in the coldest parts of Alaska hibernate through the winter, with hibernation lasting between five to eight months. During the winter, pregnant Alaskan brown bears give birth. Alaskan brown bear cubs spend the rest of the winter nursing their cubs to prepare to leave the den in the spring. Bears emerge from their dens in April or May. Via the pre-recorded Bear Cam at Brooks Falls, viewers watch as salmon attempt to leap over the 6 foot falls to reach their spawning grounds. Some salmon make it, others become lunch for a hungry brown bear. 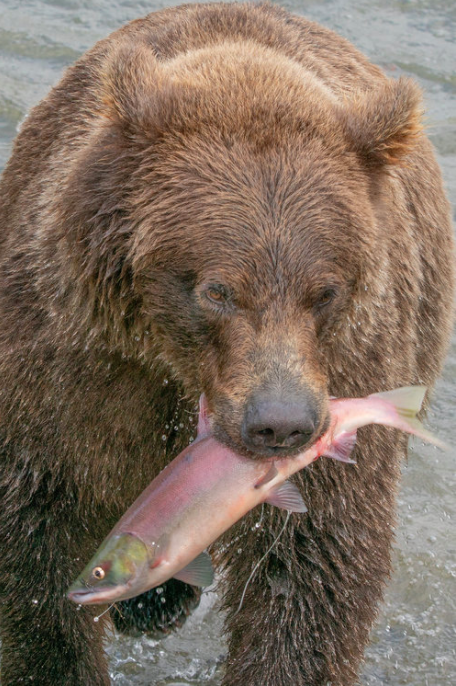 This webcam showcases the grandeur of the Jackson Elk Herd. The National Elk Refuge seeks to provide, preserve, restore and manage winter habitat for elk. In the winter, thousands of elk descend upon the area to feed on native vegetation. When the spring season emerges, bull elk begin to shed their antlers and new velvet antler growth forms. Elk females or cows traditionally give birth to their calves or young elk in late May through early June. They usually leave the herd to give birth to their calves. At birth, calves weigh between 33 and 35 pounds. The calves are able to nurse off their mother for two to five months and will rejoin the herd with their mother after two weeks. Other species that have been seen on the National Elk Refuge live webcam include bison, coyotes, bald eagles, trumpeter swans, and the gray wolf. 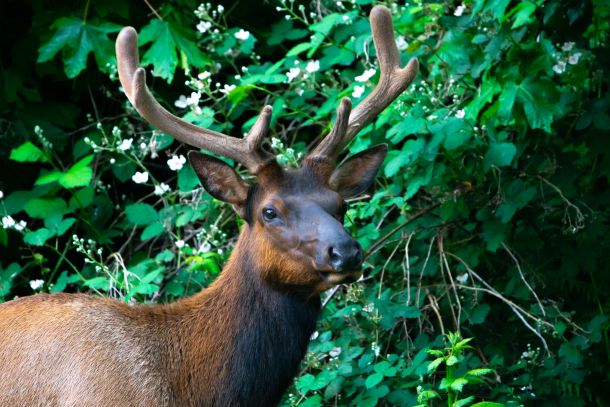 A Roosevelt elk, sporting the velvet antlers of spring, pauses from his foraging in Redwood National Park, California. Photo by Michael Ryan Clark.

For the past three successive springs, a red fox has raised kits (or pups) in a den on the campus of the Squam Lakes Natural Science Center in Holderness, New Hampshire. Adult red foxes are usually solitary until mating season, which runs from January until early March in New Hampshire. Females have a gestation period of roughly 50 days and give birth to a litter of 1 to 10 kits between March and May. The red fox has the largest distribution of any terrestrial carnivore found in the U.S., Canada, Great Britain and most of Europe, North Africa, parts of Asia and Australia. In the U.S., red foxes are found in most regions, except for western and very southern parts of the country. 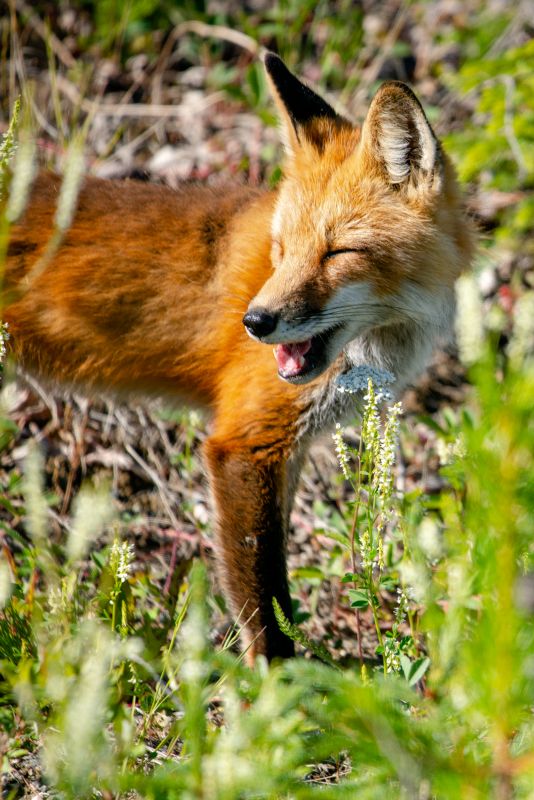 A red fox pauses her search for food to yawn in the Yukon Territory, Canada. Photo by Michael Ryan Clark.