Biden gets ‘significant bounce’ in week navigating Russian war, State of the Union

Russia’s war against Ukraine has unified Americans and bolstered support for President Joe Biden, whose approval numbers have risen dramatically after sinking for months, according to the latest PBS NewsHour/NPR/Marist poll.

About half of the U.S. public — 52 percent — said this week that they support how Biden is handling the situation in Ukraine. Two weeks ago, as Russia was getting increasingly aggressive toward its neighbor and had yet to invade, that number was much lower – roughly a third said they approved of his leadership on the looming crisis.

Regardless of their age, race, geography, income or politics, most Americans say they back economic sanctions against Russia and are willing to pay higher prices for fuel. But they are also concerned that Russia could use malevolent force beyond neighboring Ukraine and threaten the U.S. and its allies with cyberattacks, nuclear weapons or a broader war.

“It’s an opportunity for him. This is a reset for his numbers and a rallying point when it comes to Ukraine.”

The extraordinary shift in public unity and support for Biden reflects the moment. Russian President Vladimir Putin’s decision to pursue war against Ukraine has thrown the region into chaos and displaced more than a million Ukrainians. In Russia, it has prompted a swift crackdown on protests and independent news; access to outside information in Russia has been almost entirely cut off. But it’s also done more than anything else in decades to unify Europe, NATO and the global community against Putin and his brutal authoritarian regime.

Conducted in the 24 hours after Biden delivered his State of the Union address on March 1, this poll found that about half of U.S. adults – 47 percent – approve of his job as president so far, up 8 percentage points from 39 percent two weeks ago.

A leap in approval numbers of that magnitude is “a significant bounce,” said Lee Miringoff, who directs the Marist Institute for Public Opinion. “It’s an opportunity for him. This is a reset for his numbers and a rallying point when it comes to Ukraine.” 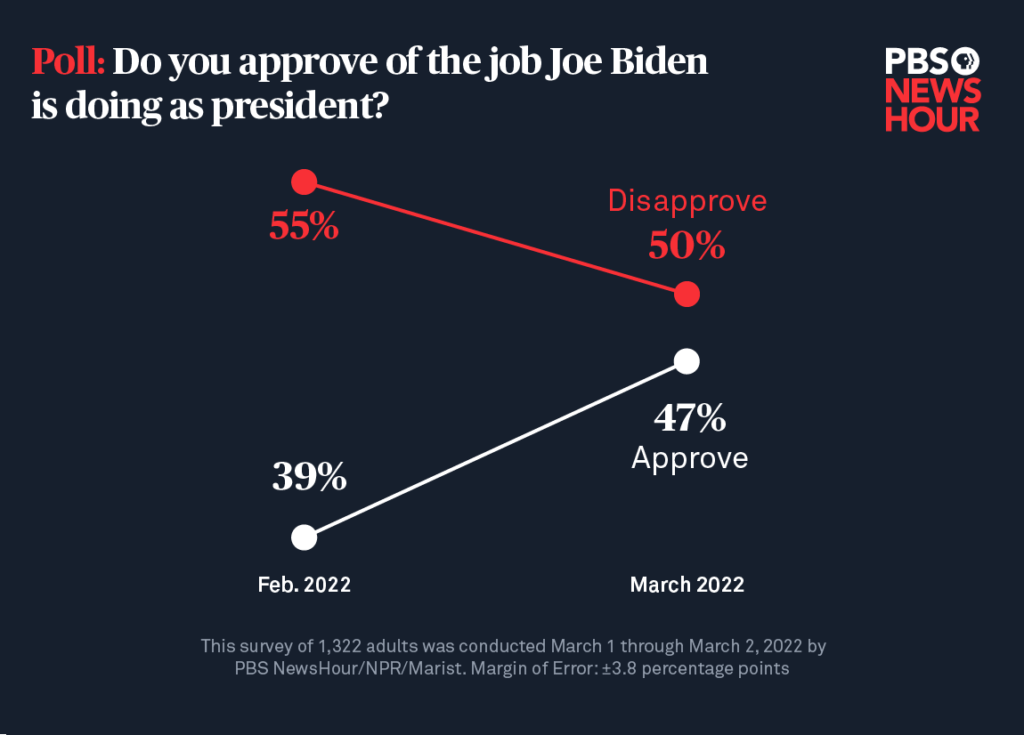 During his address, Biden assured the American people that the U.S. military would not fight Russian forces in Ukraine but would defend “every single inch” of territory held by NATO allies with “the full force of our collective power.” He also said the economic sanctions enforced against Russia would render “Putin’s $630 billion war fund worthless,” and announced that the U.S. was closing its airspace to Russia.

“When the history of this era is written, Putin’s war on Ukraine will have left Russia weaker and the rest of the world stronger,” Biden said.

Over the past week, the onslaught of news about Russia’s war in Ukraine and the White House’s response may have helped reduce the percentage of people who weren’t sure about their feelings about Biden’s handling, going from 16 percent down to 4 percent over the last two weeks.

Biden has also taken more punitive measures since Putin directed his military to invade Ukraine on Feb. 24. Overall, 46 percent of Americans say Biden’s handling has been about right, including 79 percent of Democrats. Forty-three percent of U.S. adults think the American president is being too cautious, including 73 percent of Republicans, while very few Americans — 6 percent — think he is being too aggressive.

Despite his spike in overall approval, the American public isn’t entirely sold on Biden’s ability to lead and were split in this latest poll over whether he has strengthened or weakened the country’s presence on the world’s stage.

Worries about the war growing beyond Ukraine

Under Putin’s leadership, the Russian military has committed numerous missteps in its campaign against Ukraine, said Michael Kofman, who directs the Russian studies research program for the Center for Naval Analyses. Putin and his military strategists severely underestimated Ukrainian resistance, and ill-prepared Russian troops are demoralized, Kofman said.

“This war is getting uglier,” he said. “The worst is probably yet to come.”

While it remains unclear how Putin is “going to stay in power” after so many “miscalculations,” Kofman said there is no sign they are willing to back down and instead could further leverage Russia’s deep reserves of weapons. Kofman said he thinks Russia may pursue an urban assault on Kyiv, “which they see as the center of gravity,” in part due to the leadership and resistance of Ukrainian President Volodomyr Zelensky, who has remained in the Ukrainian capital despite efforts to assassinate him. That move could mimic Russia’s 2000 siege and demolition of the Chechen capital of Grozny, Kofman added.

“This war is getting uglier,” he said. “The worst is probably yet to come.” 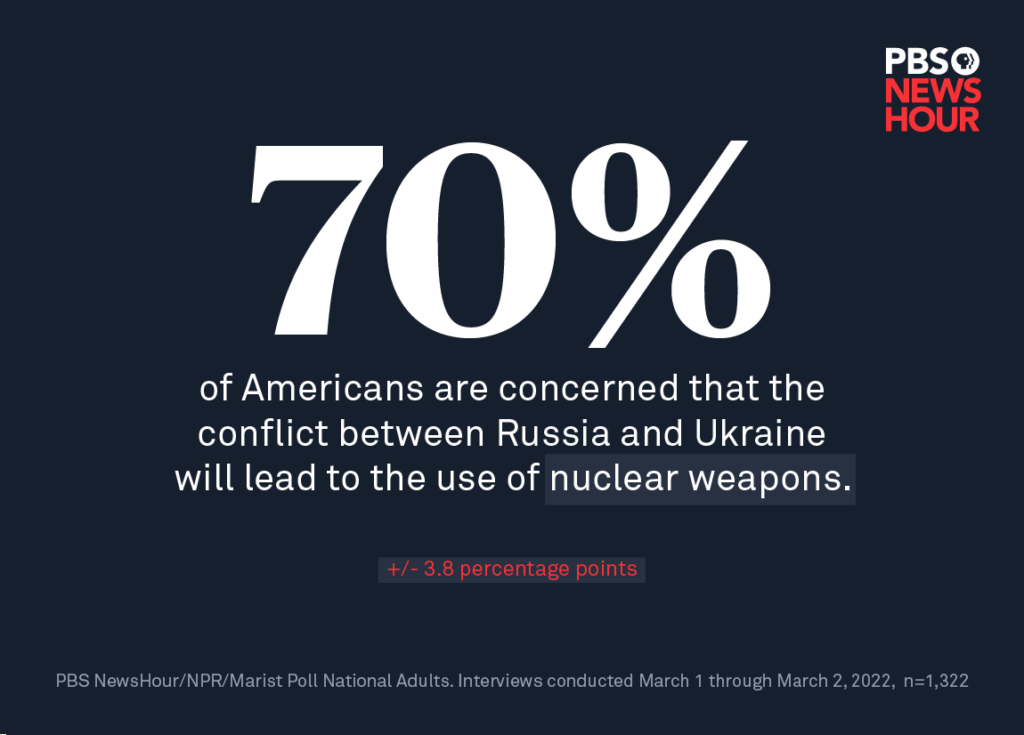 Seven out of 10 Americans expressed concern that Russia may use nuclear weapons as its invasion stalls. Putin has alluded to that possibility, including hours after he directed his military to launch missile strikes against Ukraine, when he warned that nations that interfere with Russia would face “consequences you have never seen.”

Seventy-eight percent of Americans are also worried about the possibility of both Russian cyberattacks and a broader war breaking out in Europe.

READ MORE: How to help people in Ukraine and refugees fleeing the conflict with Russia

But the path forward is not predetermined. Thinking about what may next erupt, Kofman said he has watched “wars go on for years and destroy countries. Hopefully, it doesn’t happen in Ukraine.” 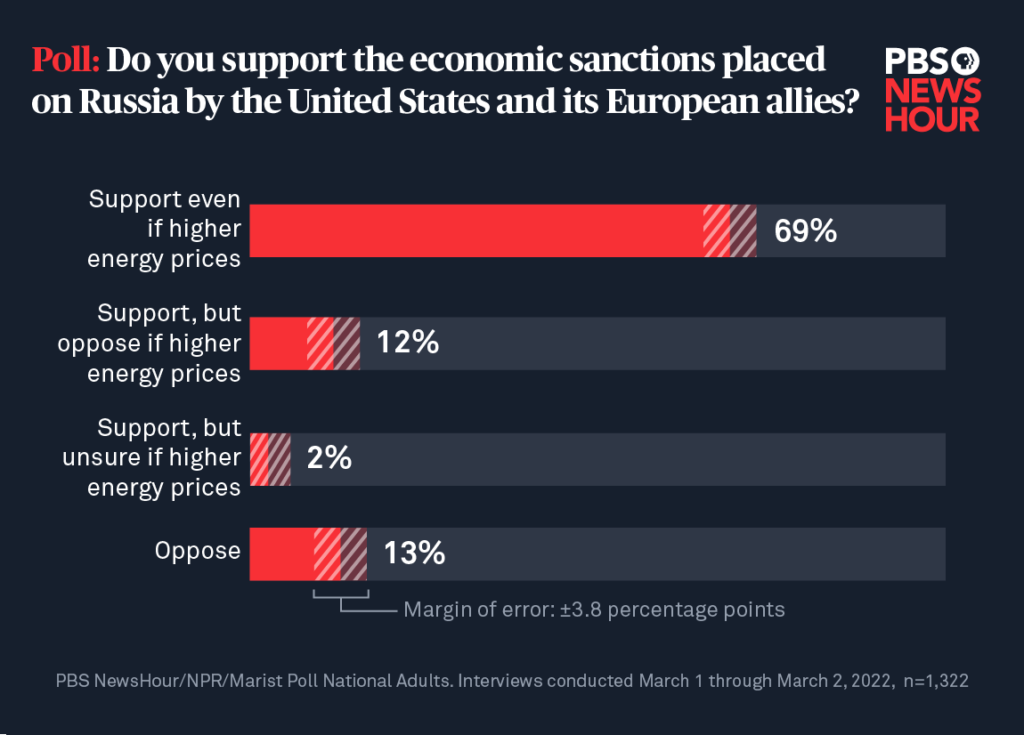 A majority of the U.S. public is also willing to go a step further – 69 percent said they support the sanctions even if they result in higher energy prices at home.

The rise in energy prices – increasing from $3.49 per gallon of regular gasoline on Feb. 14 to $3.61 two weeks later – that Americans are already seeing when they pull up to the pump are more likely “a consequence of war” – including the bombardment of Ukrainian oil reserves – than of Biden policy, says economist Georgy Egorov, who teaches at Northwestern University’s Kellogg School of Management.

WATCH: How high could gas prices go as sanctions ratchet up on Russia?

“The price we see now – it’s a result of the war and uncertainty of the world’s future,” Egorov said. “I don’t think that’s the result of sanctions.”

Sanctions that restrict Russian oil exports could have a more immediate effect, he said, but they will not quickly upset Putin’s regime. These actions could further isolate Putin and “make him vulnerable to internal pressures and unrest,” Egorov said. With rising casualties, particularly among Russians, Egorov predicted that the war will erode Putin’s hold of the country.

“Even dictators care about popular support,” he said.

Left: A majority of the U.S. public is also willing to go a step further – 69 percent said they support the sanctions against Russia as that nation pursues war in Ukraine, even if they result in higher energy prices at home, according to the latest PBS NewsHour/NPR/Marist poll. Photo by Ringo Chiu/AFP via Getty Images