“Since Atlanta, she had looked out the dining-car window with a delight almost physical.” 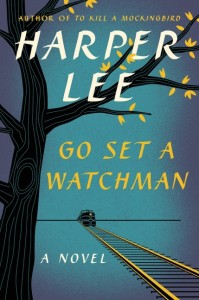 The first chapter — told from the perspective of an adult Scout, otherwise known as Jean Louise Finch — was unveiled by the Guardian and Wall Street Journal on Friday. (Read it here.)

She’s heading by train from New York to her hometown, the fictional Maycomb, Alabama, to visit her father who refuses to retire from his law firm. The story is set in the 1950s, 20 years after “To Kill a Mockingbird.”

Publisher HarperCollins said preorders for the book “Go Set a Watchman,” which is slated for release on Tuesday, are the highest in the company’s history.

The book, which Lee wrote in the mid-1950s before “To Kill a Mockingbird,” was embraced in concept by the many who adore the story of Scout and her father Atticus Finch, but raised questions about whether the reclusive author fully approved of its release. Lee’s lawyer Tonja Carter and literary agent Andrew Nurnberg have insisted she is pleased with its publishing at last.

Left: A mural showing a scene from the 1960 bestseller "To Kill A Mockingbird" was painted on a building near where the homes of 1960s writers Harper Lee and Truman Capote's homes once stood in Monroeville, Alabama on Oct. 23, 2013. Photo by Verna Gates/Reuters