“I will place on his shoulder the key to the house of David; what he opens no one can shut, and what he shuts no one can open.”

“I am a Christian,” he smiles and shrugs.

Forge, 31, speaks easily in English. He taught himself the language by reading the Bible in Creole and in English, he says.

Forge also built what is now his home by himself. It’s a cardboard and plywood structure, covered in tarps, with just enough room for a sleeping mat, a row of neatly hung clothes and a small stereo in the corner. He is one of about 500,000 Haitians still living in tent cities; another million displaced in the quake have found better housing. 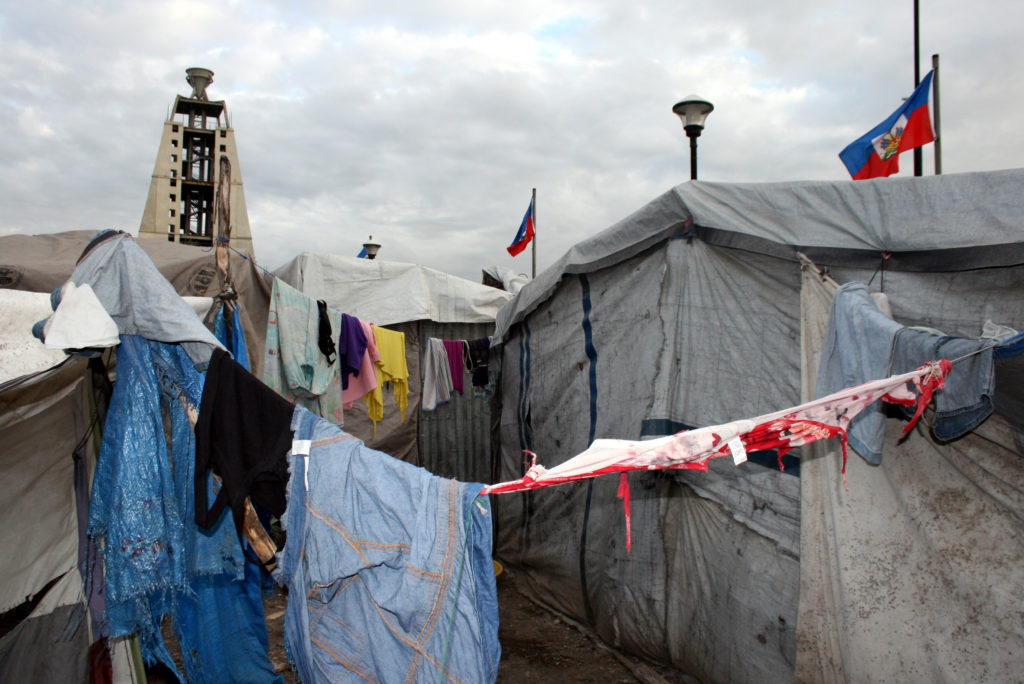 Since the earthquake, many Haitians are living in a tent camp in the capital city Port-au-Prince. Photo by Larisa Epatko

His neighborhood is the Champs de Mars tent camp located across the street from the presidential palace — still in its pitched forward, earthquake-damaged state.

Forge said in the beginning, a lot of aid agencies were providing food and water but have since scaled back their donations.

Those nongovernmental organizations now focus their efforts — in coordination with the Haitian government — on moving Haiti’s tent camp residents to more permanent housing as apartments are becoming renovated and access to necessary resources, such as water, are coming online.

Two years after the Jan. 12, 2010 earthquake struck Haiti, an estimated 500,000 people are still living in about 800 camp sites in earthquake-affected areas of Haiti, according to the International Organization for Migration. (Read IOM’s report from July on relocation efforts.) 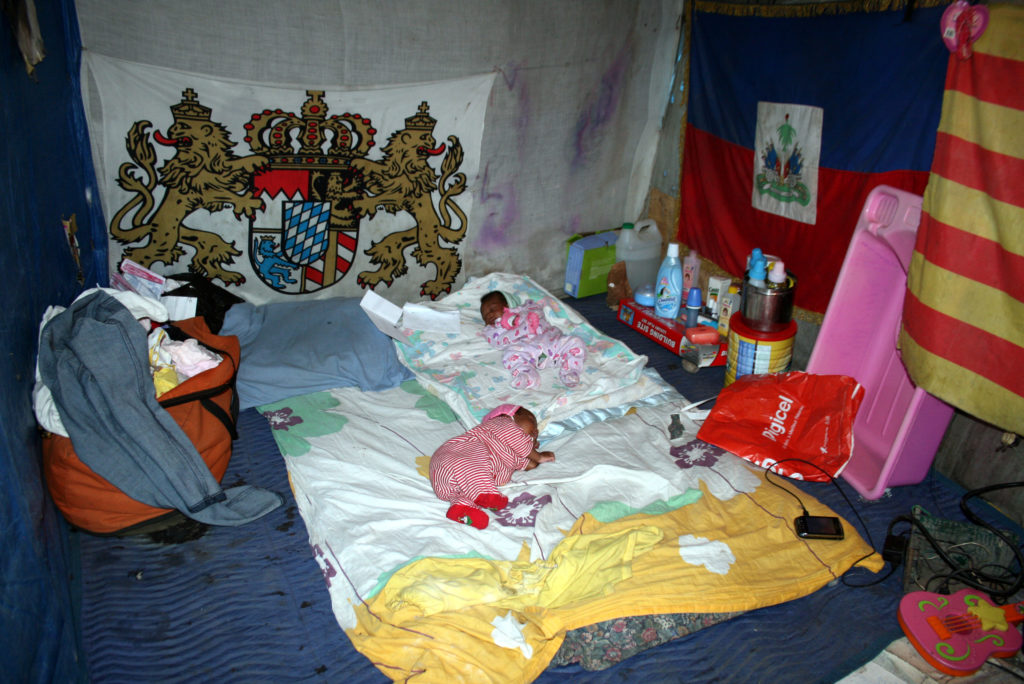 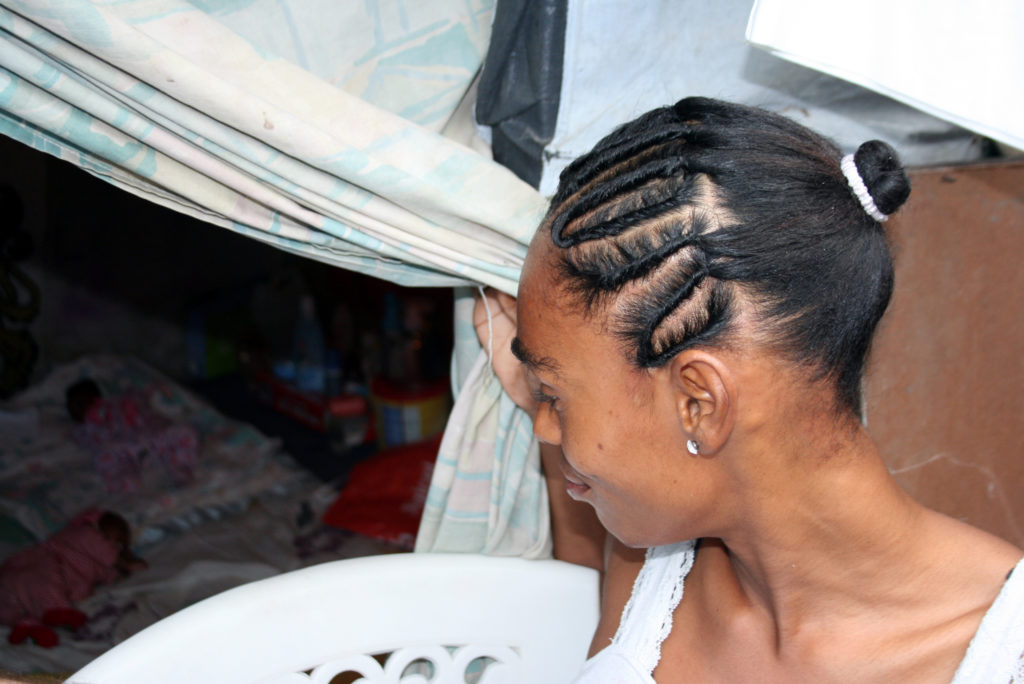 A mother looks in on her slumbering babies in Haiti. Photo by Larisa Epatko

The Haitian government and aid groups, including the IOM, provide a $500 voucher — an average of a year’s worth of rent — to camp dwellers who can find an apartment deemed safe by the government that’s accessible to water, said Melissa Vaval, project assistant for IOM.

They then have three days to move to their new home and destroy their old tent. Once everything is squared away, the new home renters are given the full voucher, which prevents people from taking the money and simply moving into another camp, she said.

One-by-one the tent camps are closing and the sites reverting back to their former uses. Once recently closed tent camp at St. Pierre Park in Petion-Ville, a suburb of Port-au-Prince, had a Christmas fair and no traces of the tent camp remained.

“You have people playing football, you have people riding bikes,” said Vaval standing in the park. “So it really became what it used to be.” 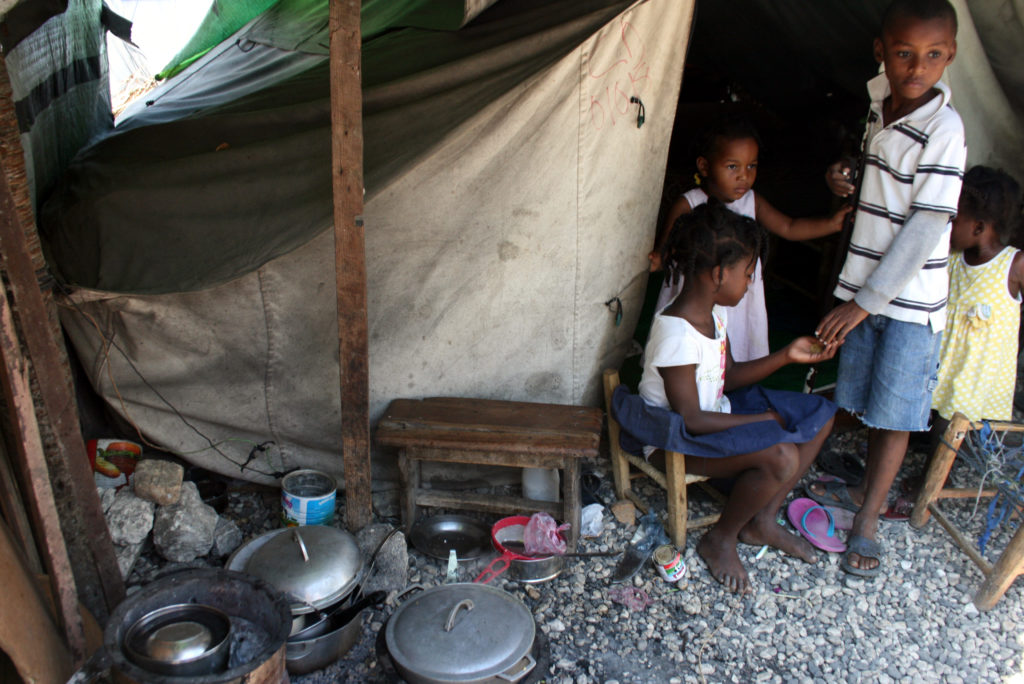 It’s difficult to gauge how long it will take to relocate the remaining tent camp residents, said Leonard Doyle, IOM spokesman in Haiti. “Champs de Mars will take up to six months alone.”

The pace of moving people out of the camps has slowed as the cases become more difficult — they either have no relatives to live with or homes that can be repaired. But with more funds and donors, the tempo could increase again, Doyle added.

Back at Champs de Mars, Forge says he’s still waiting for his $500 voucher to move out of the camp. “We’re just waiting” to start a normal life again, he said.

Related Resource: See our first dispatch from Port-au-Prince and photos of the recovering city.

All this week on the NewsHour’s website, we’re posting reports on rebuilding efforts and health issues two years after Haiti’s earthquake.