What’s it take to build a business in China?

SHANGHAI, China — University student and aspiring businesswoman Sophia Jiang has an idea for a website in China that could help students like her.

She envisions a space where people with an innovative idea about a new technology could “meet” — at least in the cyber-sense — so they can research it together.

Similar websites exist in other countries, but there’s no such thing in China, 22-year-old Jiang said recently between classes in Shanghai, a buzzing port city of 24 million people.

Her website doesn’t yet have a name, she says, but maybe it could be a word that means “the light of the future.”

China’s future, as Jiang and her friends see it, is no longer in its lagging manufacturing industry but in its burgeoning technology sector.

Manufacturing helped China’s economy grow an average 10 percent annually over the past 10 years. In 2010, China surpassed Japan to become the world’s second-largest economy, after the United States.

China’s rate of growth is now slowing — it dipped to a five-year low of 7.3 percent in the third quarter of 2014. But it is still doing reasonably well by global standards, thanks in part to its booming tech industry. 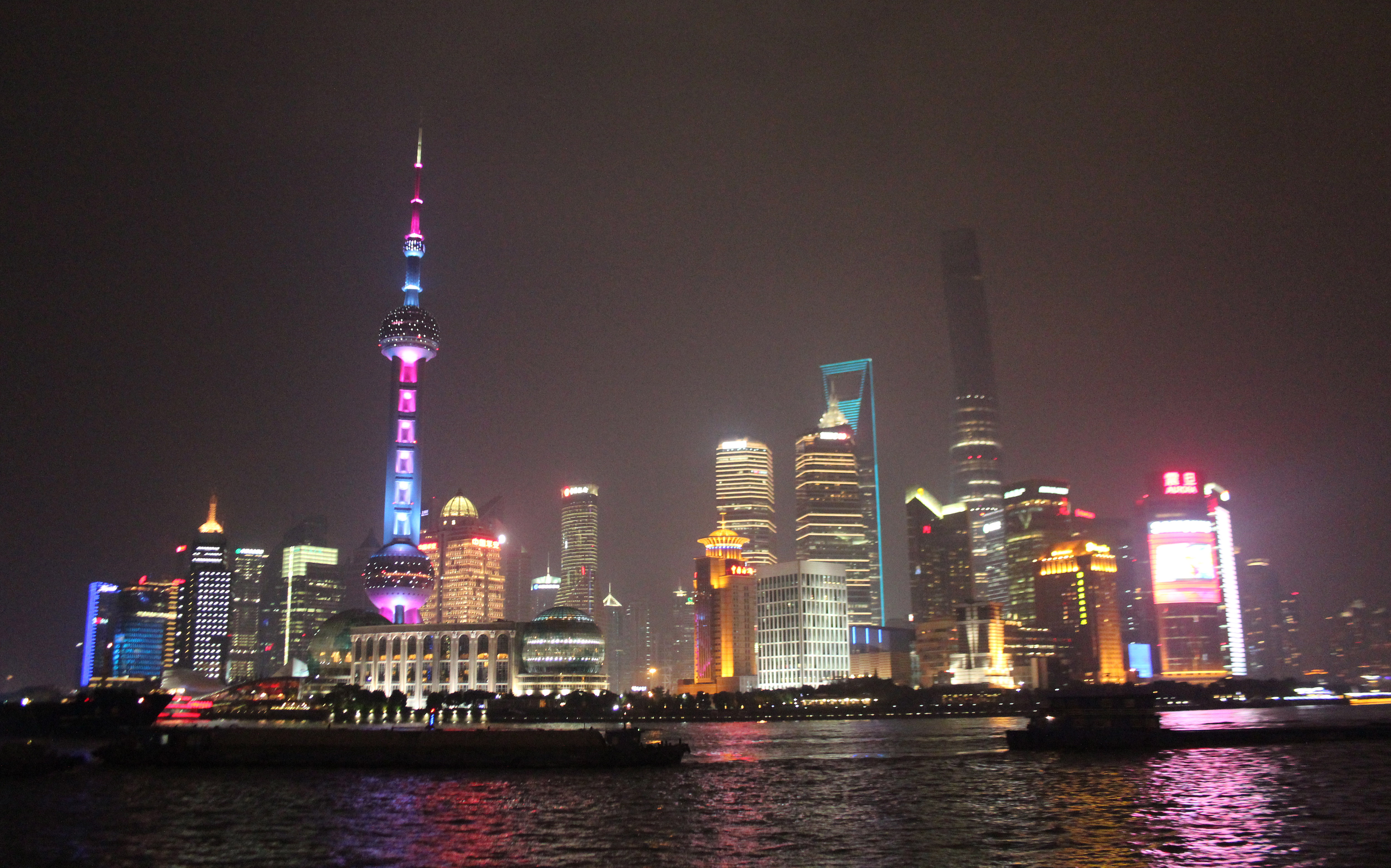 Shanghai’s skyline, which features the Pearl television tower and a building shaped like a bottle opener, lights up in neon colors at night. Photo by Larisa Epatko/PBS NewsHour

China has some big names in e-commerce: Alibaba, Baidu and Tencent, which connect purchasers with products and services from the comfort of their own phones.

“The share of retail transactions that are Internet-based in China is higher than the U.S.,” said Nicholas Lardy, a senior fellow at the Peterson Institute for International Economics who specializes in the Chinese economy. (Read how China’s Singles’ Day surpassed Black Friday in sales.)

As an indicator, China’s spending in information and communications technologies next year is expected to exceed $465 billion in 2015 — an increase of more than 11 percent from the previous year and representing 43 percent of all industry growth, according to the International Data Corporation’s 2015 predictions report, released Dec. 2.

Helping to bolster this growth are a mammoth number of smartphone and Internet users in the nation of 1.3 billion people. IDC predicts that in 2015, nearly 500 million smartphones will be sold in China — three times as many as the United States — and more than 680 million people will be online (up from the current 500 million).

“Geographically, China is very big, and you can’t have all the retail stores everywhere in China, so e-commerce is very efficient for local domestic consumption,” said Kitty Fok, managing director of the IDC’s China Business Unit based in Beijing. “We estimate by 2018, there will be 1 billion smartphone users in China.”

“The mobile Internet is a powerful tool,” agreed Eric Li, the founder and managing director of Chengwei Capital, a venture capital firm in Shanghai specializing in start-ups. “If you have a good idea, it can take off quickly.”

Entrepreneurs still need a business license, but there are no political barriers anymore, he said.

That’s good news for Jiang and her friends. But what is their next step?

As a university student, Jiang said she is planning to tap into a network of alumni to learn from their professional expertise.

That’s the easy part — getting help from someone in the know, said S. Ramakrishna Velamuri, professor of entrepreneurship at the China Europe International Business School in Shanghai. Most universities and business schools have alumni willing to share their experiences and give helpful feedback on the young entrepreneurs’ ideas.

The harder part is protecting her idea. “That is a big fear for start-ups,” said Velamuri. The concern is one of the big three Internet companies in China — Baidu, Alibaba and Tencent — will see the idea and launch its own version. 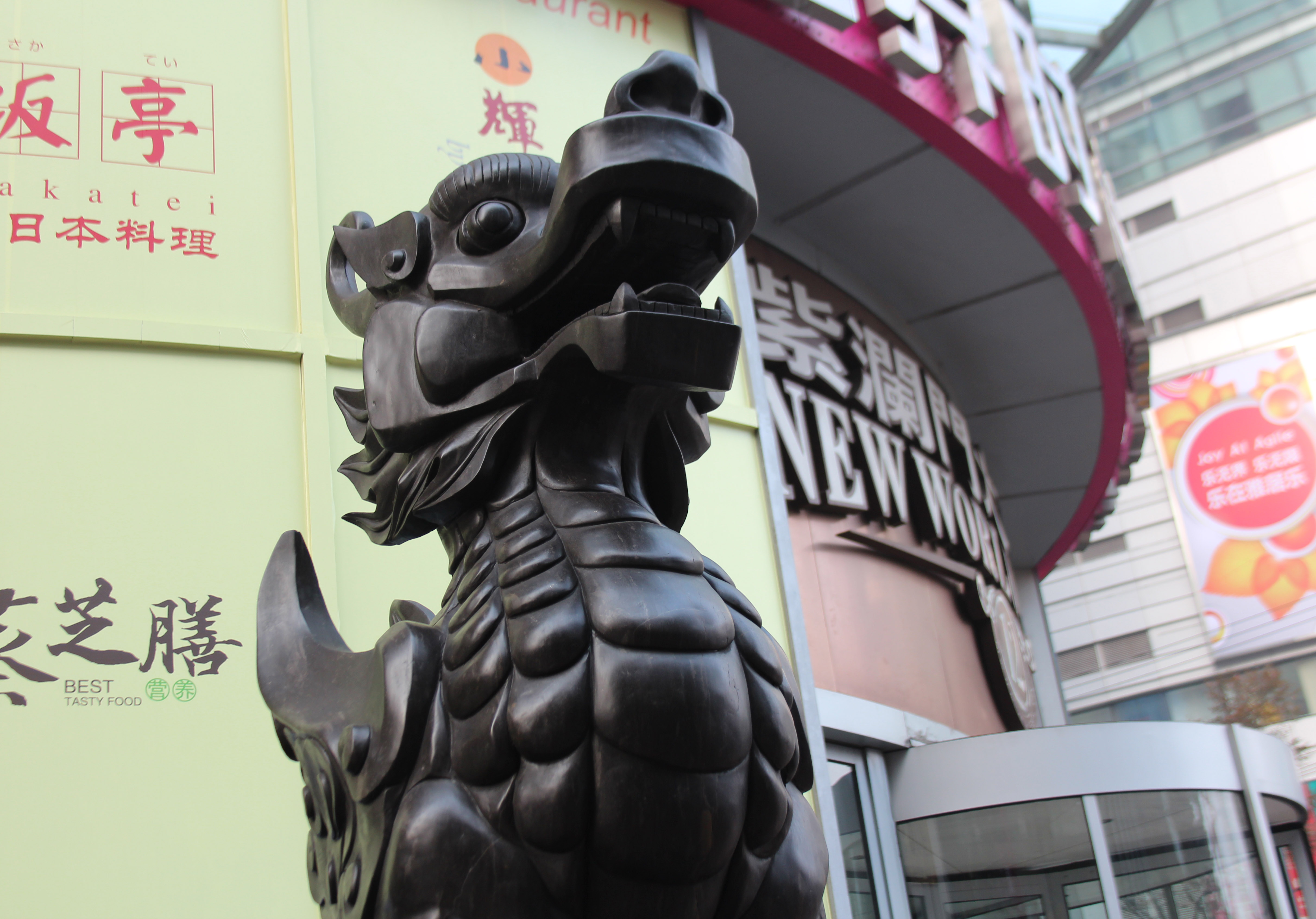 A dragon statue guards the entrance of the New World shopping center in Shanghai. Photo by Larisa Epatko/PBS NewsHour

The rise and fall of HotelVP

No one knows that better than Mars Ren, the co-founder of HotelVP, a mobile app to help customers book luxury hotel rooms late in the day for deep discounts. Other websites, such as Hotels.com in the United States, offered similar services, but it didn’t yet exist in China in 2011.

That year, Ren launched the app, got some media coverage and started attracting subscribers. But in some ways it was a victim of its own successful public relations campaign, he said, since it wasn’t able to keep up with its growing number of customers and still provide them with speedy service.

A major online travel agency, which could afford to lose money to get a bigger share of the market, according to Ren, began offering the same service. Ren and his partner ended up selling their app to JD.com, an Amazon-like company based in Beijing, where Ren now works.

“I used to believe I was very smart and my business model was perfect,” Ren recalled. If he could do it all again, he said, he would take things more slowly — test his model first and then work on expanding.

As for the protection of ideas, it’s practically nonexistent in China, said Ren, and most “ideas” are actually spin-offs of models. But this lack of protection is actually a good thing when you’re talking about copying business models and improving upon them. Then, everybody benefits, he said.

Another hurdle to starting a business in China: Entrepreneurs have to navigate the tradition of “thank you” gifts, noted Velamuri, which could be construed as bribes. But the Chinese government is trying to crack down on these practices, he said.

Under Chinese President Xi Jinping, authorities have arrested some high-ranking officials believed to have taken bribes, including the country’s former security chief Zhou Yongkang. Zhou, who retired in 2012 from leading China’s security apparatus, also was expelled from the Communist Party as punishment.

“No standing Politburo person has been charged with corruption,” said the Peterson Institute’s Lardy. “We can say with confidence that they’re taking it very seriously.” 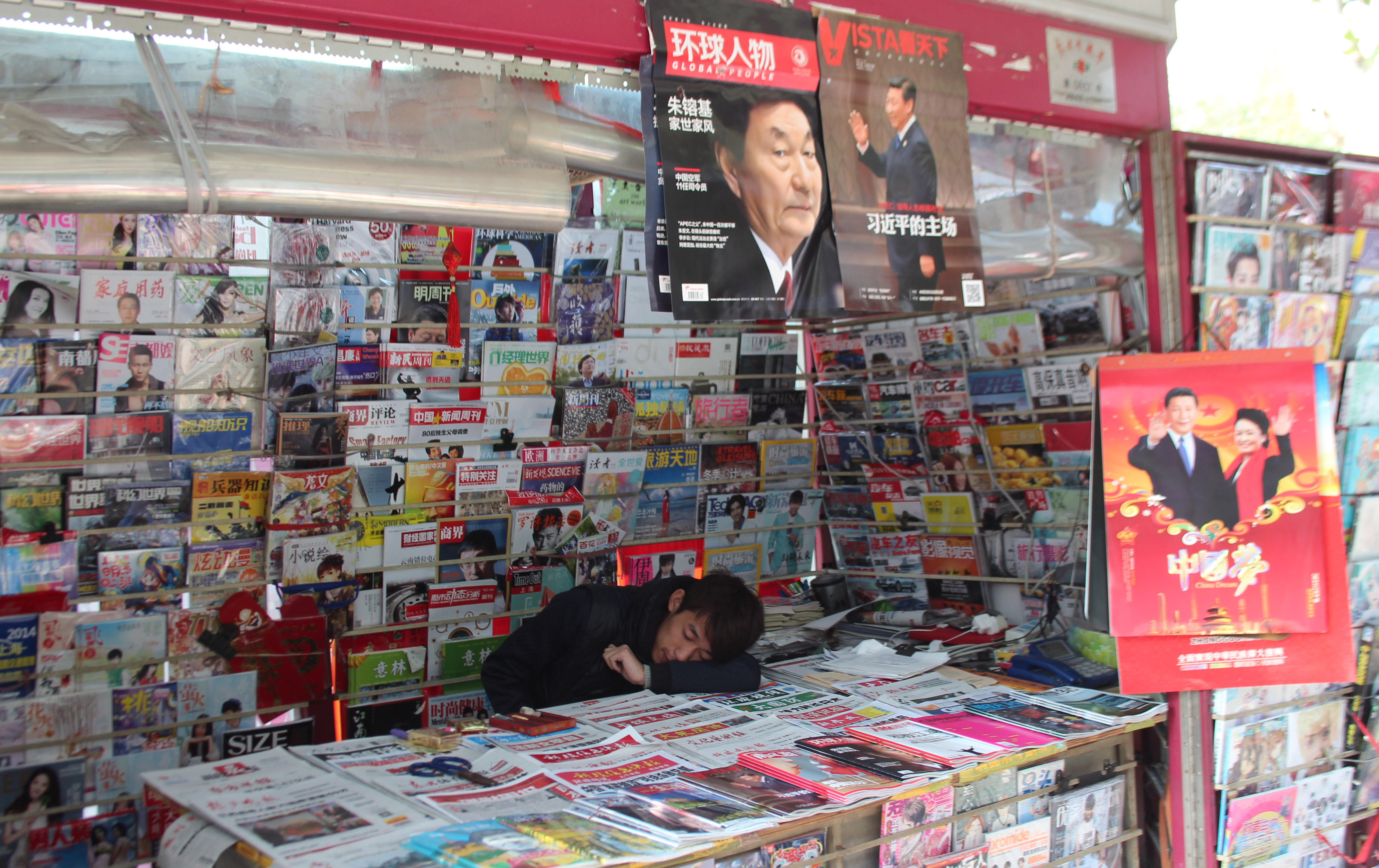 A newsstand in Shanghai bears the faces of celebrities and politicians. Photo by Larisa Epatko/PBS NewsHour

Despite China’s efforts, the country fell a few notches in the 2014 corruption perception rankings issued in December by the Berlin-based organization Transparency International, showing the Asian nation still has a ways to go. (See how all countries ranked.)

What the corruption campaign’s ultimate effect will be is still difficult to judge, Lardy said, whether it’s a generic campaign against corruption versus one targeted at Xi’s political adversaries and those opposing his initiatives.

Li, the 46-year-old founder of Chengwei Capital, was recently asked by a group of reporters what grade he would give the government on its anti-corruption efforts. He declined, instead saying:

China is trying in other ways to make the climate more comfortable for business owners and investors alike.

Literally in terms of climate, China is cooperating with the international community to set standards for greenhouse gas emissions. Xi for the first time in November set a date of 2030 for China to reach peak carbon dioxide emissions and to increase its clean energy consumption by about 20 percent. 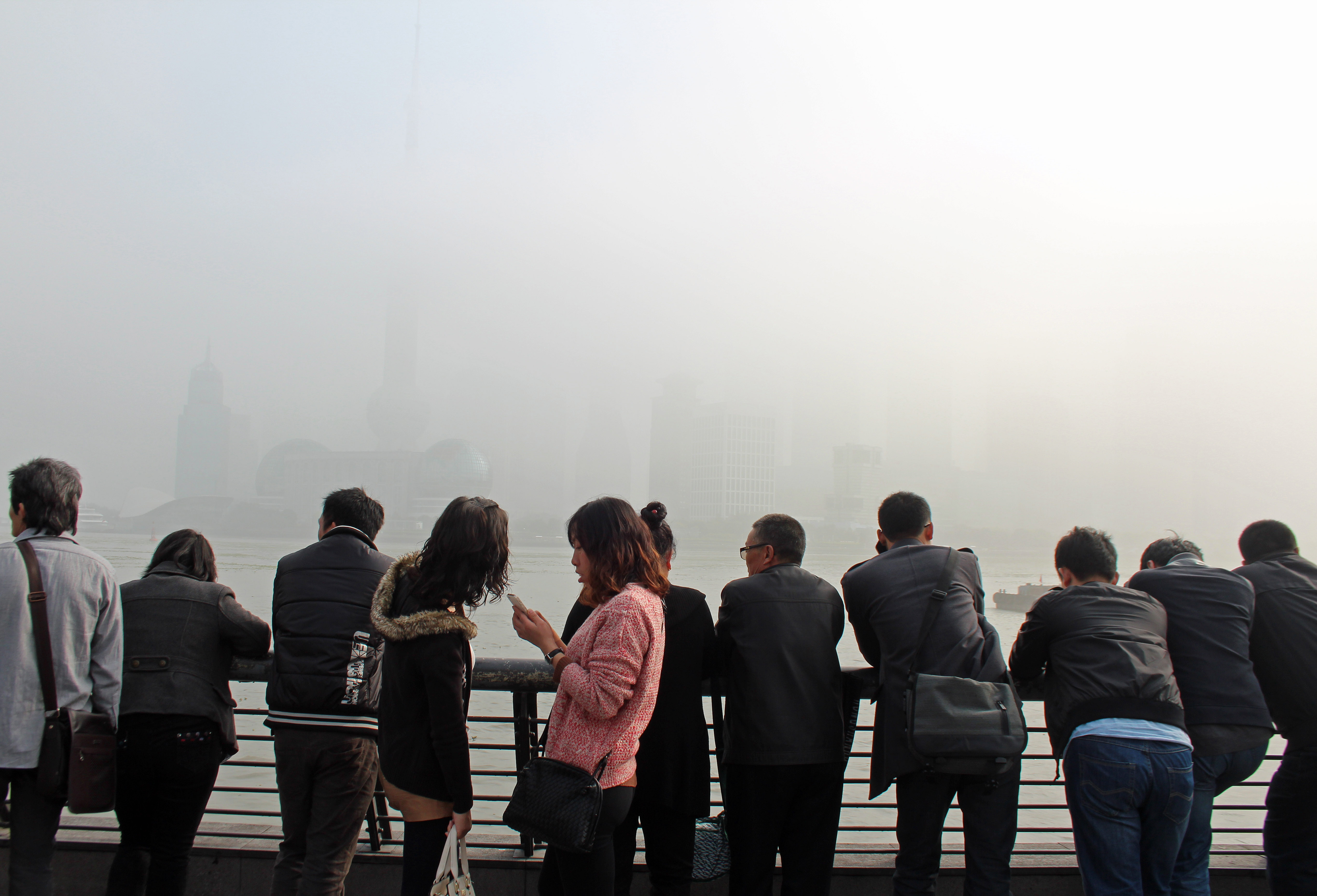 In addition, Xi and President Barack Obama announced that business visas between the two countries would be issued for up to 10 years. Previously, they were granted on a yearly basis.

These agreements were hailed as a success, but even larger improvements are needed, said Lardy. “The lack of effective protection of intellectual property rights, trademarks, patents — some of these handicaps to foreign business haven’t been resolved.”

And China’s infamous firewall, which filters content for hot button political terms and blocks web pages accordingly, can sometimes slow the Internet to a crawl. “I don’t think that the government will change it in the future, because it’s important for the government to control what information is being broadcast around the country,” said the IDC’s Fok.

A younger generation of entrepreneurs

But even if foreign investors have reason to wait until the condition in China further improves, it’s not stopping the start-ups.

“When you look at the number of small businesses starting, it’s hard to imagine these (challenges) are significant impediments to starting a new business,” he said. 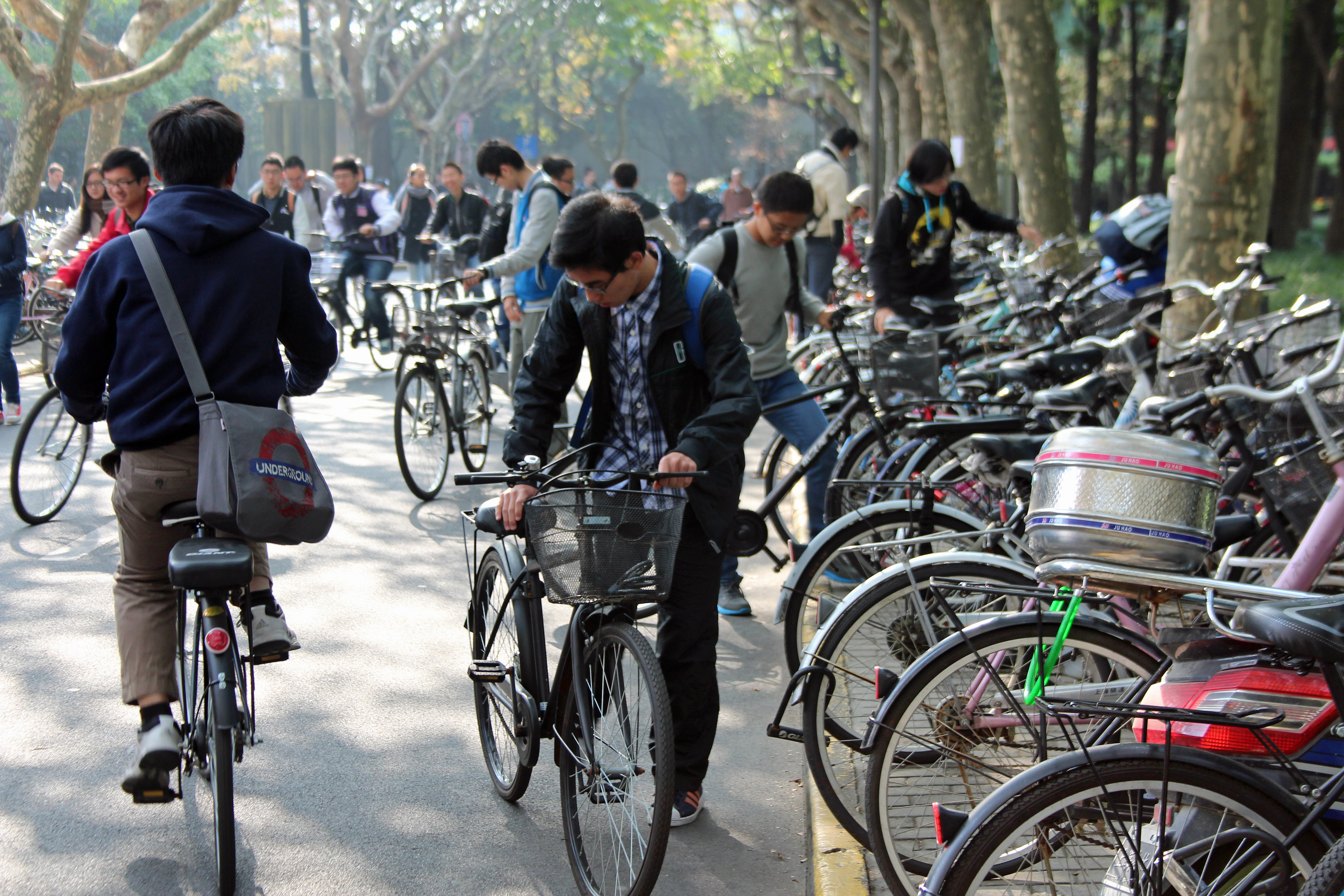 The Internet in China is about 20 years old, and so are some of its newest entrepreneurs. And they don’t need much money to start a website or online service. “Youngsters from middle class families, with little wealth, are now setting up ventures,” said Velamuri. “This is a very exciting trend.”

Jiang, who hopes to become one of those new entrepreneurs, said her friends are full of ideas and are more driven than young people in the past. “Several years ago, they just wanted to get a stable job, form a family and live day-to-day. Now, they know what they want, and they know how to do it.”

This report was produced from a trip to China arranged by the National Press Foundation.